And the Corporate Giant That's All Wet

The Wizard has spoken.

And I've been telling you this day would come for years.

In this case, the Wizard is a global conglomerate with $156 billion in annual sales in markets ranging from jet engines to dishwashers. You know it as GE (NYSE: GE).

The decree handed down? That the water market will "grow from a drop in the corporate bucket to a major growth driver within years."

Of course, if you've been paying any attention to this column for the past three years, you already knew that. I've been tooting the water bull horn throughout that entire time.

But it's always nice when a juggernaut squarely in the public eye confirms your case.

Indeed, industrial blue chips have been preparing for this day for some time. The Dow Chemical Company (NYSE: DOW) is heavily involved in desalination and filtration membranes. And IBM (NYSE: IBM) is now touting how it's using its information management prowess to solve growing water problems.

GE, for its part, has spent $4 billion on acquisitions to secure its future stake in the water industry. . . even though they'll only (only?) make $2.5 billion in the sector this year.

According to Reuters, that has led some analysts "to wonder if GE might prefer to sell it to focus on businesses where it can better enjoy the benefits of scale." But this analyst — and GE — know better than that. There's too much upside at stake.

Executives at GE have plainly said their water unit will become a "major profit contributor." That can be true for your portfolio as well.

Looking at a quote from the president and CEO of GE's water unit, it reads like a potential mission statement for Energy & Capital:

"What GE tries to do is to align the company with some of the mega-trends, the mega-challenges of the world. Energy is one, healthcare is the other, and the third one is water."

Two out of three ain't bad.

Cashing In on Water Profits

I won't spend any time covering why there's an imminent bull market in water. For that, you can simply search the Energy & Capital and Green Chip Stocks archives.  I've covered it exhaustively on both sites.

The time has come to focus not on why, but on how to profit from this mounting mega-trend. All it takes is a little acuity. The Alternative Energy Speculator, for example, has closed six winning water positions already this year on everything from parts suppliers to environmental engineering firms.

And it's only going to get easier as water problems continue to mount in industrialized nations and as more capital is deployed to combat them. What's more, billions of your tax dollars have already been dedicated to the cause. Making easy water profits is one way to get some of it back.

I say 'easy' because no less than $7 billion has been earmarked for water-related spending via the stimulus. This money — either in the form of grants, loans, or direct contracts — will make its way onto the balance sheets of publicly traded companies.

This is where the acuity comes in. Tracking that money like a bloodhound on a prison escapee is an easy path to water profits. That's what I do for the community of Speculator investors. I do the leg work. . . they make easy profits.

Only a trickle of the $7 billion has been spent so far, but the flood gates are about to be opened.

The Department of the Interior has $1 billion available to "fund authorized water reuse and rural water construction projects." That money, according to their 14-page stimulus plan, will go toward "investments in water management infrastructure, water conservation, water reclamation and reuse, [and] rural water projects."

The Environmental Protection Agency has even more to spend on water — a full $6 billion. Here's the water blurb from their stimulus plan:

Many communities across the country are faced with critical water quality issues but lack the funding needed to fix the problems. In many locations, the aging network of pipes that convey drinking water and wastewater are leaking, and need repair or replacement. EPA will award $4 billion to construct wastewater infrastructure and restore and protect surface and groundwater quality. Additionally, $2 billion will be awarded to help states and local communities address drinking water needs such as water treatment and distribution systems. States will have the flexibility to target resources to their particular environmental needs by basing project priorities on public health and environmental factors, in addition to readiness to proceed to construction. Of the $6 billion, $1.2 billion of the funding will be targeted toward green infrastructure, water and energy efficiency, and environmentally innovative projects.

Of all that money available, only a fraction of it has been spent.

This is the kick-off party to years of easy water investing. If you're going it alone, I'd suggest holding a water ETF or two. Here's a chart of a few I keep a close eye on: 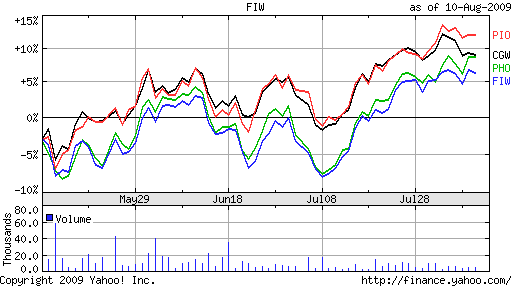 You can see how they're already accelerating in parallel with the release of stimulus funding.

If you want more specialized guidance, the Alternative Energy Speculator has an entire section of its portfolio dedicated to water stocks. Like I said, six of the 30 winners we've closed so far this year have been water-related. And we're sitting on a few more open water winners.

Click here to learn about our next profit-making water play.