When it comes to the hydraulic fracturing debate, it seems like a new study or report comes out every month.

It's a coin toss as to whether the latest news will support the fracturing method... or decry it as an abomination.

The only consistency is that everyone seems to have an opinion on the matter.

I feel like I'm rolling the dice every time I bring up the topic with someone, because I rarely come across people who actually understand the situation...

They realize drillers have been fracturing wells for more than sixty years.

They recognize how critical the method is to production — that nearly 90% of all U.S. wells need to undergo some form of fracture stimulation.

And they understand that without it, this EIA projection will never come true: 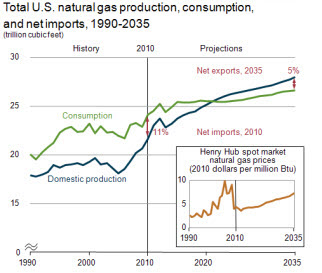 And as I mentioned a few weeks ago, we are starting to rely on hydraulic fracturing more than ever before.

So, are we going to keep 'fracking' amidst the heated debate and continued protests?

Of course we are — downsides and all.

Most of this growth is taking place where you'd least expect it...

Two months ago, I hinted that the holy grail in energy is overtaking crude oil's stranglehold on our transportation sector.

Worldwide, the number of natural gas vehicles on the road is expected to grow to 25.4 million in the next seven years.

After you come to grips with the massive opportunity this creates, the next thing to ponder isn't whether or not to put your hard-earned money to work in the market — but rather how to play this gas boom.

As you'll soon find out, some natural gas investments have a better outlook than others.

Today I'll tell you about three of them.

The Good, the Better, and the Not-So-Ugly Anymore

In the past, there's been just one natural gas investment that's raised a red flag for us.

If the United States Natural Gas Fund doesn't ring a bell for you, you're probably better off.

But is it still an "ugly" stock?

This natural gas ETF may have caused investors pain in the past, but if you bought as gas prices fell below $2.30 per Mcf three months ago, you'd be singing a different tune: 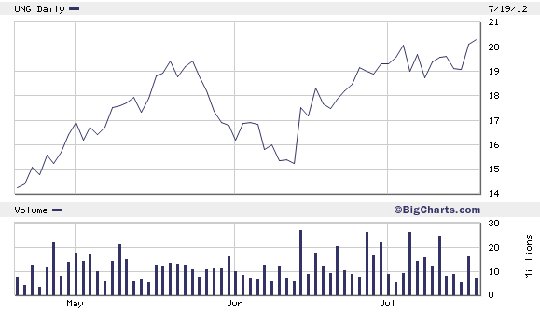 What we've always described as the worst natural gas investment in recent history has turned a tidy 30% profit since April.

Has the bottom for UNG finally arrived for investors?

Maybe. But let's face it; there's simply too much going against it.

Between the supply glut and the years (perhaps decades) it will take to ramp up LNG exports to a significant level, we can't possibly expect a significant jump for gas prices over the next few years...

Then we have the producers. These companies are the ones doing the dirty work, driving the drill-bit into the soil.

Some players like Cabot Oil and Gas are making headway in the Marcellus Formation.

One of the reasons we're betting on the Marcellus is economics: These companies are able to spend up to $7 million per well (compared to areas like the Haynesville, where wells can cost as much as $11 million).

Unlike UNG, however, shareholders of Cabot have fared much better over the last four years: 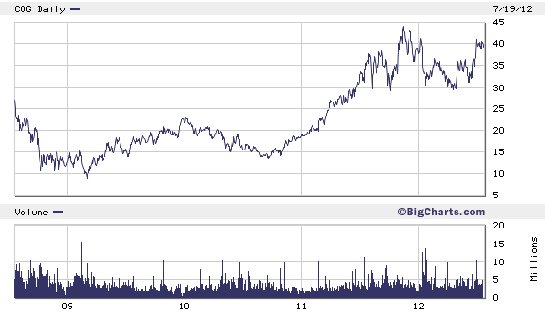 The third opportunity for natural gas investors won't fall from low gas prices, nor does it own a single drilling rig or acre of land...

I'm referring to the technology that will take the North American shale boom to the next level.

What could possibly better than developing a technology that completely eliminates the biggest downside to hydraulic fracturing?

And when it comes to this innovation, this company holds all the cards.