These 5 Offshore Drillers Are Still Kicking

It was only a matter of time...

That thought has been running through my head like a song you just can't stop humming. Quite frankly, I wasn't sure how to even feel about it.

You see, it's been nearly a year since BP's deepwater debacle, and now it looks like they're trying to move back into the neighborhood.

Apparently, the U.S. government is more forgiving than the Louisiana fishermen.

Believe it or not, it's going to happen. And they couldn't even let a year pass before going back...

The trick for BP is to start small and try not to ruffle too many oil-stained feathers.

According to a recent article, BP is reportedly asking to start drilling again in the Gulf of Mexico. Although they don't currently have drilling permits, the first step for them will be to drill at 10 existing wells.

Even though U.S. regulators are still too shy to admit to the deal, the BBC reported BP was told they could resume operations in the Gulf as early July.

I can't say BP blame them for wanting to return to the Gulf. You might remember an $8 billion share swap with Russia's Rosneft. The goal was to help develop offshore targets in the Arctic.

Unfortunately for BP, the deal is now bogged down in arbitration. It turns out a few Russian billionaires are having second thoughts, claiming the deal goes against shareholder agreements.

And they're not the only ones eager about their offshore prospects...

There's a hair under 800 offshore drilling units operating worldwide — a slight 5% increase compared to a year ago.

The future is looking much brighter for offshore.

Last year, I laid out why the world needs these offshore fields to be developed.

For starters, one-quarter of global oil production comes from just twenty fields, nearly all of which have passed their peak and in an irreversible decline.

Another 50% of the world's production is from approximately 110 other fields. The rest is made up from about 70,000 smaller fields.

Not only are the super-giants starting to fail us — Cantarell's production collapse, for example — but we're not finding them anymore. The number of oil field discoveries peaked in 1964, and the size of the fields is getting smaller and smaller.

Even the good news isn't so good. Brazil's highly-touted Tupi discovery is going to take years to fully develop, and at a very steep price.

U.S. offshore production, however, had been in trouble long before the Macondo well incident...

Consider this: Our domestic offshore production dropped 57% between 2008 and 2009.

Sure, BP certainly didn't help things by sparking a drilling moratorium and threw fueled the anti-offshore sentiment. But we can't put it all on their shoulders.

But enough of the doom and gloom for now. Because in spite of BP, the moratorium, and the decline in production, there are still a few offshore drilling stocks worth a second look.

Onshore, offshore — does it really matter?

The fact is all of your oil and gas plays should be performing well.

Take these offshore drillers that we've been following since the drilling moratorium: 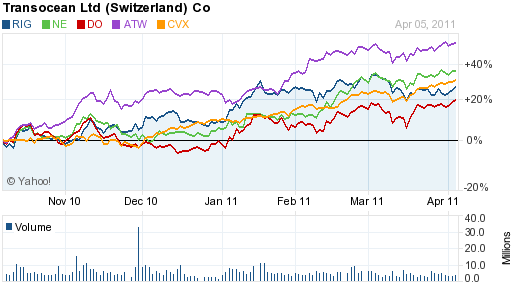 What else did we expect to happen after the price of the sweet, Texas crude jumped back into triple-digit territory? Brent crude recently topped $116 a barrel, too.

Imagine how high oil prices will rise if (some would prefer to say when) unrest in the Middle East spreads to Saudi Arabia...