There’s No End in Sight for Cannabis Investors

This is Huge for Marijuana Stocks

This is how much U.S. consumers spent on beer last year.

But apparently, some of that market share is about to be taken over by the cannabis industry.

According to analysts from Cowen and Co., the beer industry could soon lose more than $2 billion in retail sales to legal cannabis:

While recreational cannabis has only limited availability, the rise of cannabis consumption more broadly looks to be weighing on alcoholic beverage consumption, where it is now in decline for men and higher income consumers.

Analysts at Cowen also noted that within three states that have fully legalized, the underperformance of beer in those markets has worsened since 2016.

Now, I’m not saying everyone’s going to give up their Budweiser and microbrews for cannabis, but make no mistake, cannabis is having a huge impact on the beer market. And you better believe we’re looking to take advantage of this action.

The First Crack in the Dam

Last week, we saw the first crack in the dam.

As reported by the Independent, sales of cannabis have officially overtaken alcohol in Aspen, CO, where it is legal for anyone over the age of 21 to purchase and consume cannabis.

In 2017, cannabis dispensaries in Aspen did about $11.3 million, while sales of alcohol came in around $10.5 million.

Although Aspen only has a population of less than 7,000, some in the alcohol industry are seeing this as a sort of “canary in the coalmine” situation. And they’re leaving nothing to chance.

As someone who’s been in the cannabis game for a long time now, I can tell you that I’ve met and know a lot of alcohol execs who have been investing heavily in the cannabis industry. Some even sit on the boards of cannabis companies.

And, of course, you may remember last year, when it was announced that Constellation Brands — the company that owns Corona — ponied up nearly $200 million to get a 10% stake in one of the biggest cannabis players in the world: Canopy Growth Corporation (TSX: WEED).

It should also be noted that just recently, the owner of Lagunitas Brewing Company, which was sold to Heineken for about $1 billion, told industry experts that cannabis will be “way, way bigger” than craft beer.

To put that in perspective, in 2016, the craft beer industry did in excess of $23 billion in sales.

Not Even Market Crashes Can Stop Cannabis

Last week, when the market took a nosedive, something interesting happened...

Most cannabis stocks remained stable or even rose in value.

One reason for this is that most of the big funds and banks don’t own cannabis stocks, so those stocks were less affected by the downturn in the broader market.

Another reason is that this market is just so damn lucrative, not even a couple 1,000-point drops can slow it down.

Now, if you’re a regular reader of these pages, you know I’ve been telling folks to get a piece of the cannabis market for years.

Those who listened have made small fortunes.

After all, I recommended buying shares of Canopy Growth Corporation back when you could buy it for $1.60 a share. Today, it trades for around $28.00.

Here’s how those worked out: 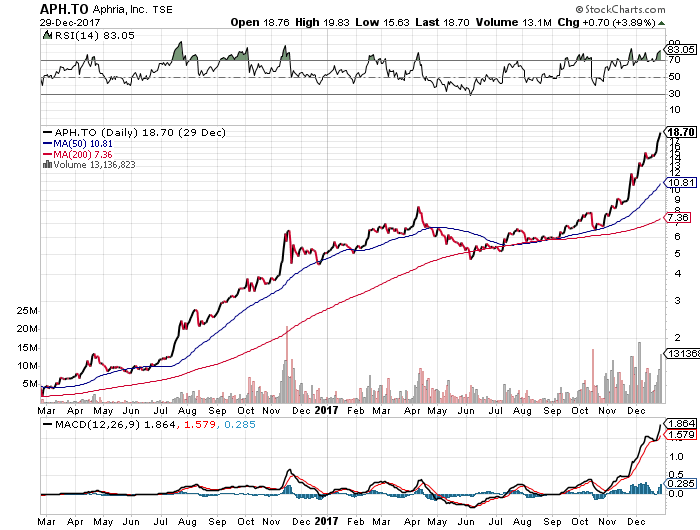 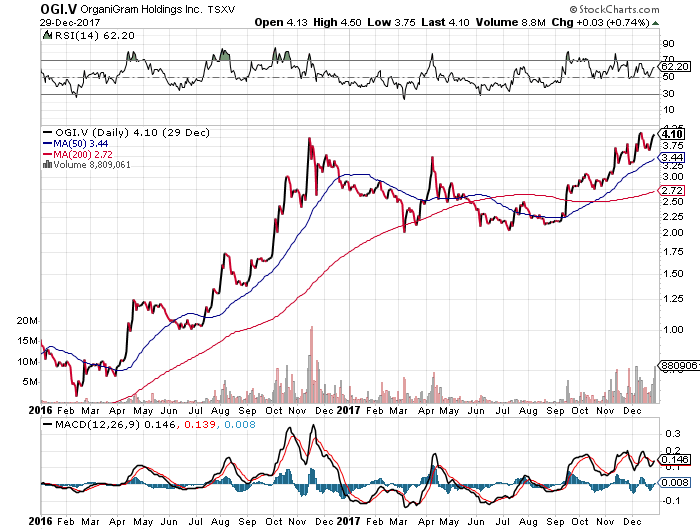 And folks, this is just the beginning.

As of last month, California, the sixth-largest economy in the world, is now home to the biggest legal cannabis market in the world.

The entire country of Canada will fully legalize this year, and Mexico is now on its way to full-scale legalization, which could actually be approved this year.

So to get you up to speed on the legal cannabis market, I put together a “Beginner’s Guide to Investing in Cannabis,” which you can get access to by clicking here.

I also had our video team produce a short “Introduction to Cannabis Investing” video, which you can watch here.

Look, I’ve been helping investors make a lot of money in the legal cannabis game for nearly four years now.

Just look at some of these winners...

And there’s plenty more to come.

Truth is, only a fool would ignore this opportunity at this point. There’s just too much money to be made. So you might as well make it.

P.S. I’ll be making a new cannabis stock recommendation to members of my Green Chip Stocks investment community in just a couple of weeks. To get in on that, click here and become a member today.