The War on Fracturing

Whenever I'm asked what the most important historical points were for our oil and gas industry, the answer may not be what you expected to hear.

Granted, the first thought that comes to mind for most people is Rockefeller and the birth of the U.S. oil industry, or even famous Texas gushers that followed.

I immediately think of the scarcely-known Hugoton field in Kansas.

Don't be too hard on yourself if you haven't, because I've yet to come across someone that has heard of it before. I doubt you would even find it in many history books.

The Hugoton field is where the first experiments on fracturing were performed. In 1946, it was the place that Stanolind Oil used napalm, sand, and water to stimulate the rock formation. Trust me, the napalm they used was a step up from the nitroglycerin used during the 19th century.

You know the process today as hydraulic fracturing, or fracing.

Three years later, in 1949, the first commercial application of it was used on wells in Oklahoma and Texas.

It's been an ongoing public relations battle ever since.

I've witnessed the protests and have heard the accusations from anti-fracers.

And if you take a closer look, you'll begin to notice the same excuses pop up over and again, without any solid evidence to back up the claims.

It's become a revolving door of excuses for them, and it appears that whatever the fractivists' Rolodex lands on any given day becomes their hot-button topic for the next few months.

Slowly but surely, the accusations are dismissed each time.

Unfortunately for them, they'll have to break out the Rolodex again, maybe a little sooner than expected.

Just this week, the EPA said the hydraulic fracturing process did not contaminate the groundwater in Dimock, PA. At least, that's the conclusion they drew after their second round of testing on 20 wells.

I have no doubt that you've heard the horror stories from Dimock.

Ever see video footage of a homeowner lighting his faucet on fire? That's the place.

The small town in Pennsylvania has been the rally point for fractivists everywhere.

The EPA's own administrator, Lisa Jackson, doesn't have an objection to the process. Last year, she testified to the U.S. House Oversight Committee that she wasn't aware of any proven case where hydraulic fracturing has affected groundwater resources.

She reiterated that same sentiment recently, saying, “Fracking as a technology is perfectly capable of being clean.”

How to Invest in Fracturing Technology

We've mentioned before how our future oil and gas industry will be shaped through technological breakthroughs.

But you can do more than just sit idle. Investors can literally take these innovations to the bank.

In January, our domestic oil production topped six million barrels per day. The last time it reached that high was fourteen years ago.

Our country is also producing more natural gas than ever before. It couldn't have come at a better time, considering global natural gas consumption has doubled during the last thirty years: 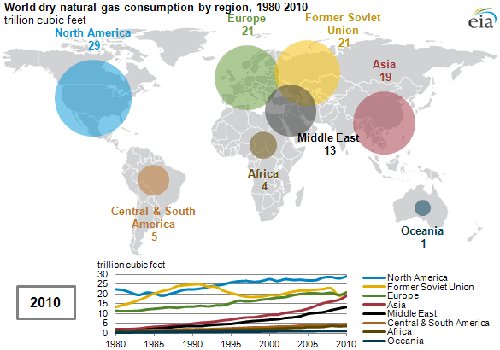 For many, the bitter pill to swallow is that our good fortune in oil and gas production has come on the back of hydraulic fracturing. It isn't some coincidence that almost 60% of the new oil and gas wells on U.S. soil are being drilled horizontally.

And of all the anti-fracing rhetoric to hit the media over the last few years, there's just one statistic they can't get around – almost nine out of every ten wells drilled in the United States will need to undergo some form of fracture stimulation.

Right now, there is no getting around that fact.

But maybe the EPA's Lisa Jackson was on to something when she said that fracturing technology could be cleaner.

My readers and I have hit on a small company that could prove her words prophetic, even threatening to overtake hydraulic fracturing as the go-to technology driving our shale boom.

Look for my full report on this growing investment opportunity to hit your in-boxes soon.