Is Ohio's Utica the Next Major Shale Play? 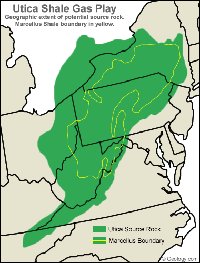 It's called the Utica Formation, and it's one of the newest shale plays entering the scene.

Located a few thousand feet below the Marcellus Formation lies the Utica Shale, stretching across eight states and into Canada.

And it's Ohio's portion that we're paying particular attention to over the next few years...

Just take a look at the disparity between oil and gas prices.

The further west you go in the Utica play, the more liquids-rich production becomes (think: oil and wet gas).

As you move east towards Pennsylvania, we're looking at more dry gas.

In fact, that's one of the reasons Ohio's share of the play is being likened to the Eagle Ford Shale in Texas.

Although we're still in the early development stages, some believe the recoverable oil and gas reserves in Ohio could be upwards of 5.5 billion barrels of oil and 15.7 Tcf of gas.

Remember, the high end of the current USGS estimate on the now-famous Bakken in North Dakota is "only" 4.3 billion barrels...

Of course, Ohio isn't new to the oil and gas industry. More than 250,000 wells have been drilled in the state to date, with over 60,000 oil and gas wells currently in production.

The question now is how Ohio will develop it all.

We all know how New York feels about producing its shale resources. The state has been a hotbed of opposition over hydraulic fracturing. And New Yorkers aren't the only ones disputing this drilling process...

Last week, the Province of Quebec placed a moratorium on the practice. If that ban stays in place, it means the 40 trillion cubic feet of natural gas beneath Quebec will never be extracted.

It's a missed opportunity for both places.

Hopefully Ohio will take a page out of Pennsylvania's playbook — because as you can see below, the Keystone State has seen tremendous success from the Marcellus since 2008: 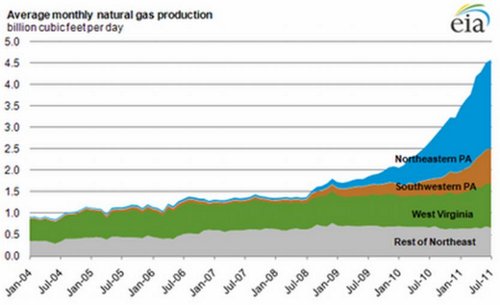 And Pennsylvanians are directly benefiting from it. 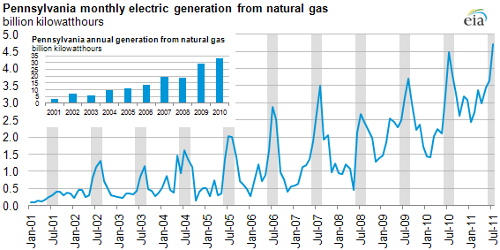 And that is the direction Ohio is headed.

The number of active rigs drilling for oil and gas in Ohio has more than doubled in the last two years.

So far, the state has issued approximately 150 permits for Utica Shale wells. You can see how things are heating up: 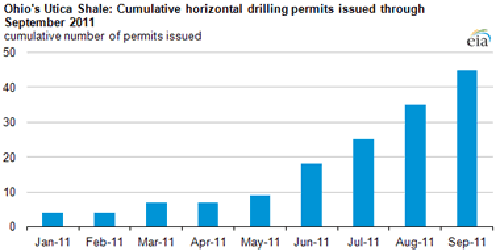 Big Oil is already making a run on the play.

Last week, BP announced it had picked up 84,000 acres in Trumbull County, Ohio.

As the second largest oil and gas producer in the United States, it was only a matter of time before BP caught wind of the play. The company is already active in the Haynesville and Eagle Ford.

But we know individual investors can do better than BP...

Three Stocks Betting on the Utica

Going by land position, the obvious choice would be Chesapeake Energy, which holds more than a million acres in Ohio's Utica Shale.

Earlier this week, Chesapeake gave us insight as to how well their drilling is going so far: Five of their wells in eastern Ohio produced 2.6 billion cubic feet of natural gas last year.

A single Harrison County well produced 2% of the state's entire gas production in 2011, or about 1.5 billion cubic feet.

The top landholders in Ohio include Anadarko Petroleum, Devon Energy, Hess, and Chevron. Even smaller players like Rexx Energy — with nearly 60,000 net acres in the play — will be focusing on developing their Utica positions.

And over the long haul, some of these Utica players haven't disappointed investors: 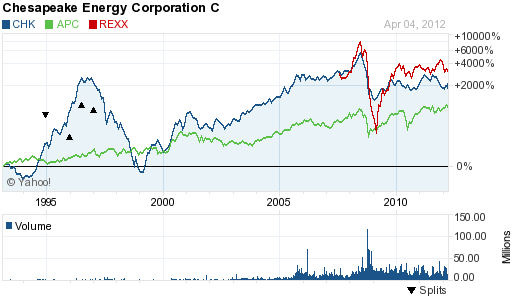 The bottom line here is that eastern Ohio is shaping up to be a strong shale play going forward.

These types of growth plays don't stay quiet for long...

I expect we'll see a rush of good drilling news coming out of the Utica in 2012 — especially if these drillers can build on Chesapeake's success.

In other words, dear reader, the clock's running out to catch this play.