The Truth About Energy

Taking Sides Is Costing You Money

When it comes to energy, they want a “fossil fuels guest” and a “renewable energy guest.”

This way everyone is marginally appeased...

No letters from either side's lobby or industry groups; a comfortably numb viewership that thinks they've heard both sides of the coin.

Yet the vindictive energy dichotomy that's emerged in this country has made it hard for real people to get real information.

Guests like me tell both sides. And that's a no-no.

To listen to one side tell it, the current president has gone to war on oil. He's ladled on the regulation and made it impossible for new wells to be drilled.

To say that U.S. oil production is being stymied is a lie. The real issue is that we used to produce over 3.5 billion barrels of oil per year... in 1970.

But no, Peak Oil isn't real. We've only lost 1.45 billion barrels per year of production in the last 42 years.

Good money has been made not only from the rise of crude oil's price as production decreases, but also from companies going after the now harder-to-get stuff.

Renewable energy has been a terrible stock investment.

Wind and solar companies that were once the largest in the world (Vestas, Q-Cells, SolarWorld) and even some smaller ones (like Solyndra) have collapsed...

Indeed, shares of those companies — and many others, as evidenced by the fall of solar and wind exchange-traded funds — are sliding hard:

Yet counterintuitively, installations of wind and solar are up big.

Opposite of related stocks, charts for solar- and wind-installed generation capacity are going almost hyperbolic: 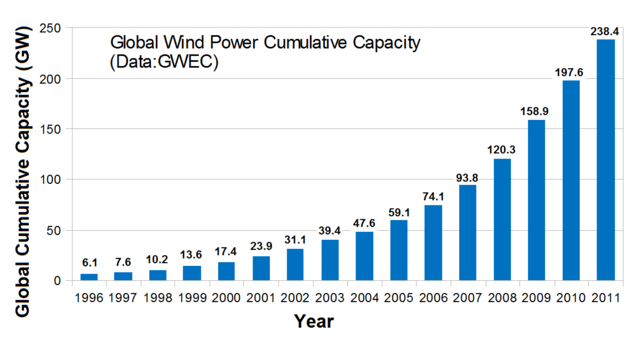 The answer is rapidly falling prices.

It's getting drastically cheaper to produce electricity with wind and solar.

This is precisely why Solyndra failed.

But when silicon solar companies started innovating and bringing down the cost of their products, as always happens with economies of scale, Solyndra was no longer competitive.

In fact, the price of wind and solar has come down so much that the margins disappeared as they became commoditized.

But this is exactly what renewable energy detractors were asking for all along.

Now that prices have fallen, they're pointing to the failure of companies as evidence that renewable energy is dead. But what's really happening is it's growing so fast, the weakest ones in the herd are being thinned out.

Those citing Solyndra as a symptom of a dying solar industry have it completely backwards...

Solyndra went bankrupt because of free market dynamics (of course, the government shouldn't be subsidizing either side with loan guarantees, cheap land, or cleaning up spills).

Investing isn't politics. You don't have to choose sides.

It's not either/or. It's and/when.

And it always has been.

The sooner you stop taking sides, realize we need every source of energy we can get, and invest in all of them... the sooner you'll start making more money with energy investments.

P.S. I'll be covering no-spin energy investments of both the fossil fuel and renewable persuasion at this year's New Orleans Investment Conference. If you'd like to see me and other straight-shooters like Marc Faber and Peter Schiff, you can learn more by clicking here.