The Saudi Drain, Dow Euphoria, and Profit from Snowmageddon 2017

Over the weekend, Repsol SA announced a giant find onshore in Alaska. Some 1.2 billion barrels of oil have been discovered on the North Slope, marking the biggest onshore discovery in the U.S. in three decades. Production could start as soon as 2021.

Combine that with tight oil production, and Saudi Arabia can no longer control the price of oil. That's a big deal.

The Saudi economy is slipping. The government is tightening its belt. Net foreign assets are around $500 billion and shrinking. The government spent $70 billion last year to cover its budget deficit — $107 billion if you include money owed to contractors.

It's no wonder the Saudis are bringing their flagship state oil company, Saudi Aramco, to market via IPO next year. They are hoping they can cash in on a $1.2 trillion offering while there is still time.

The Saudi government has a six-point plan to diversify its economy away from oil, but it has been trying this for decades and it hasn't worked yet. No one knows what will happen when those 1,500 entitled princes have to get a job, but it will be fun to find out...

Geopolitical tremors will span the globe when the power and money move from Riyadh to Anchorage and Houston. That said, the less money flowing into the Middle East, the better.

The market has gone up 3,000 points since Donald Trump was elected in November.

As you can see by the chart, we are well above our 200-day moving average. The MACD is overvalued and crossed, which presages a decline. The RSI is also overvalued and dropping.

I would argue that the 2000 dot-com bubble was an anomaly that is unlikely to be repeated in the current debt-driven bull market. The Internet drove productivity improvements in a way that Snapchat, Twitter, and Facebook are not.

The point is that the market is on the high side and we are in an interest rate hiking environment.

Friday's positive job numbers suggest that the Fed will hike this week for the third time. Inflation is already climbing. The Fed will soon have to play catch-up. “Don't fight the Fed” is a saying for a reason.

You have to start asking where we are on this chart: 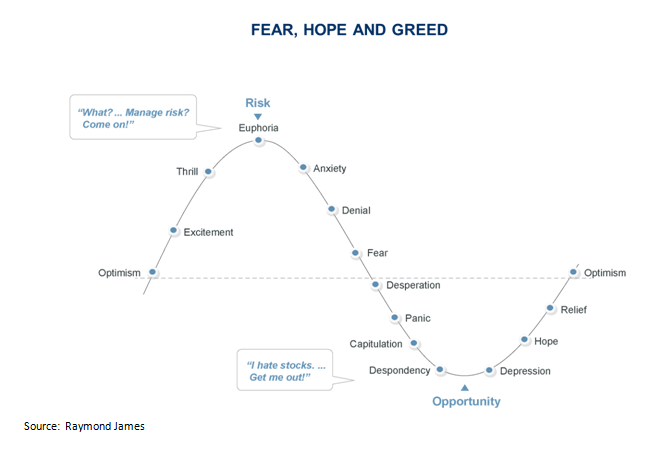 The last few months in the market have been exciting.

I know when my Ethereum play doubled last week it was thrilling. My Crisis and Opportunity investors were thrilled when Fate Therapeutics got FDA fast track and climbed 128% in price. I'm sure you have some recent winners yourself...

Are we at euphoria? It's hard to tell until it's over. I do know that the institutional money is selling just as the mom-and-pop investor is getting back in. 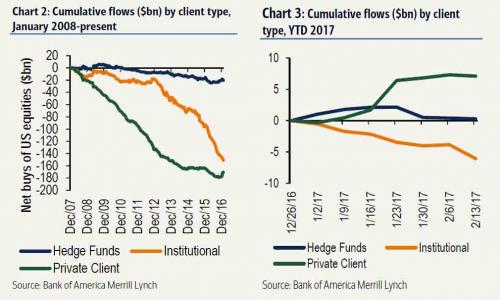 Like clockwork, it took them nine years to get up the gumption to buy... and yet they will be holding the bag again.

We are heading for the third crash in two decades, and there won't be a net for the next one.

There is a big storm blowing across the plains as I write this.

The National Weather Service issued a blizzard watch from late Monday night through Tuesday evening for New York City and parts of northern New Jersey and southern Connecticut, while winter storm warnings and watches were issued for the remainder of the Northeast.

Meteorologists said the storm could bring 12 to 18 inches of snow in New York City, and up to 24 inches north of the city, as well as eastern Pennsylvania and northern New Jersey. The storm could also bring wind gusts of 40 to 50 mph.

How to Play It

A good way to trade this event is to go long UNG, the natural gas ETF. Or go long Generac Holdings (NYSE: GNRC), a company that makes generators. It tends to move higher before storms and sells off afterwards. In my experience, the post-storm short is the better trade.

Have a good one,