You'll be hearing about this for the next year, as it will mark the second wave of the current financial crisis.

Option ARMs is the mortgage equivalent of the crazy, drunk uncle you try to keep hidden during family gatherings. And just like the drunk uncle, sooner or later, he staggers into the living room, ruining the party...

It's worse than subprime...

Now, when it comes to Option ARMs, we’ve been sounding this alarm for months — if not years.

It won't be as bad as subprime, of course — it'll be worse. 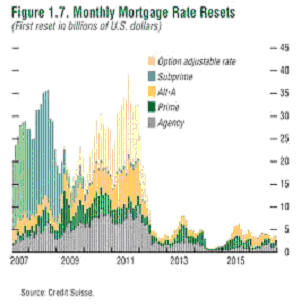 That's because lenders created these ARMs with "teaser" features for borrowers; features that included making lower minimal payments for the first few years before the loan reset to a higher payment schedule.

If that weren't bad enough, there was another feature called "negative amortization," which meant you weren't paying back any principal.

In fact with negative amortization loans, your loan balance increased over time. Incredulously, every time you made a payment, you owed the bank even more. These are the loans that allowed consumers to buy houses they couldn't otherwise afford.

What should concern you is that about $750 billion worth of option adjustable mortgages (option ARMs) were issued between 2004 and 2007 and will begin resetting shortly. Institutions like Bank of America, JP Morgan Chase, and Wells Fargo are in for a rough ride, given their exposure to option ARMs.

What do you think will happen to housing when the resets happen?

We'll see even more foreclosures, as Option ARM resets cause a larger number of foreclosures than subprime.

Higher unemployment will deteriorate any chance of keeping some homeowners from defaulting. Homeowners will find it acceptable to strategically default on house payments, as it's just easier for them to just walk away.

These "walk-aways" or "strategic defaults" have more than doubled from 588,000 between 2007 and 2008, according to reports... Analysts expect there will be more, as financial "experts" tout the benefits of walking away from mortgages.

And the financial community will be left holding the bag.

Housing is in trouble; foreclosures will mount; and people will continue to walk from their homes.

The mortgage crisis will continue to drag on the economic recovery — so long as homeowners fall behind on payments — and this will send investors to the safe havens of gold.

History shows us that market panic sends smart investors to the ultimate safe haven of gold.

The credit woes of the 1903s sent American investors to gold... The U.S. subprime chaos that began in 2007 was responsible for rocketing gold... The European debt contagion alone is partially responsible for pushing gold up more than 10% this year to $1,200 an ounce...

It seems that every time the dust seems to settle, we’re kicked in the gut again — sending gold higher. And what’s about to unfold with Option ARMs could be responsible for sending gold even higher than it is today.

This means you should want to buy gold — or buy more gold — right now.

Because I don't care how bullish the Fed is... They're wrong.

According to the AP, more than four million homeowners (8% of all Americans with a mortgage) are at risk of losing their homes. And many analysts, including yours truly and my fellow editors, are forecasting another dip in home prices as more glut hits the market.

Things are going to worsen because government plans aren't helpful. Banks aren't doing much to prevent foreclosure, and regulators failed in their oversight. Politicians walked away from protecting Americans and at this point, would end up opening the floodgates to predatory lending and over-leveraged derivatives... Obama's plan to help the unemployed will most likely fail.

Gold remains one way for investors to hedge themselves against this financial crisis.

Even 60 Minutes and JP Morgan understand this

60 Minutes found that at least a million Americans who can afford to stay in their homes just walked away, and JP Morgan is out warning investors that underwater homeowners may walk away from mortgages.

But besides buying more gold, there's another way can you profit from crumbling real estate and mounting foreclosures: You buy the companies that process the foreclosures.

My latest report explains why 20 million properties will be foreclosed by 2012 — and how this could make you very, very rich.