The Next Boom Cycle in Oil is Within Sight

Oil markets have been cyclical since the first wells were drilled more than 150 years ago.

That’s simply the way it is — endless rounds of booms and busts that are driven by the supply and demand dynamic.

My veteran readers know all about these cycles and have lived through more than a few of them.

Here it is in a nutshell...

Low oil prices lead to long periods of underinvestment, which inevitably push demand higher. You tend to fill up your tank more when a gallon of gas is nice and cheap, don’t you? When demand increases, you’ll start to see the supply/demand balance tighten, which leads to higher prices.

Once prices rise, we start to see companies begin pumping more investment cash into their projects to boost supply. Of course, the nasty little side effect of higher prices will cause demand to drop off, which means it will eventually be outstripped by supply. Prices collapse, and we find ourselves back in a situation where companies cut investment.

And if you think you’re too young to have experienced it, I’ll let you know a little secret — you’re living through one right now!

This time around, however, we find ourselves in a precarious position as we move away from the last bottom.

Last week, we talked about the internal bickering rearing its head within OPEC.

Supposedly, OPEC is ready to sit at the table with non-OPEC producers and discuss a potential production freeze.

Yes, it’s this old song and dance... the same one we’ve been fed for years.

You can probably guess why I'm skeptical:

The meeting is being proposed by Venezuela and a few smaller producers — the usual suspects — because they are suffering the most.

We haven't heard from Saudi Arabia yet, which really is the only OPEC producer that matters at this point. That’s not to say the Saudis are reaching their own breaking point, mind you.

Iran won’t agree to any form of a production freeze until it’s officially reached its pre-sanctions output level. Not that it would go along with the group anyway... Iran has a history of not playing well with OPEC members.

Any deal to stabilize global supply would have to include Russia, which is in the same boat as Saudi Arabia — it simply can’t afford to turn off the taps.

Basically, it’s the Doha hype all over again.

You remember how that turned out, right?

You can see where this is going — absolutely nowhere.

And that’s just fine with us.

As it stands now, two of the world’s largest oil producers — Russia and Saudi Arabia — are extracting crude oil at near-record levels.

The wild card right now is the United States.

When I say that this recovery is in a precarious position, it’s because any spike in crude prices now will send the dominoes tumbling, as those independent oil drillers in the Lower 48 will suddenly kick-start their drilling activity.

The ensuing price collapse would put us right back where we started.

One year from now, I want you to turn to the skeptics and say, “I told you so.”

Then I want you to remind them again about the oil industry’s cyclical nature. If they need a refresher, or are perhaps stricken with a case of amnesia, kindly show them the day oil bottomed on February 8, 2016: 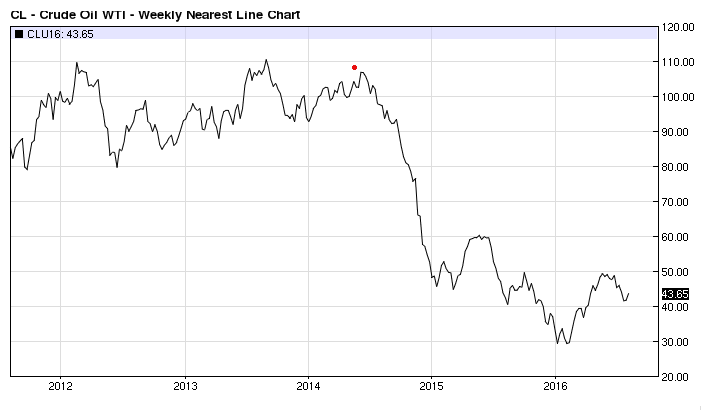 WTI crude traded as low as $26.14 per barrel that day. Of course, prices have nearly doubled since then, briefly reaching over $50 per barrel in early June.

And if right now isn’t a strong buying opportunity in oil — just as we’re starting to see oil markets re-balance — then it’s time to find that confidence. Pinpointing oil’s bottom isn’t necessarily impossible, but it’s one way to cash in on the fear that has permeated the market since the summer of 2014.

Yes, the oil recovery is still on rocky terrain. We’re by no means through the volatility. And the one thing I’ve tried to hammer home to my readers is that it won’t happen overnight.

The smart investors, however, will be buying into some of the biggest opportunities hidden in the market before the rest of the herd catches on.