Why Exploding Batteries Are History

By now, I'm sure you've heard the tale of the exploding hoverboards.

My readers may remember in October when my associate Chris DeHaemer wrote about the popularity of these items — among several other battery-powered appliances — and our experimentation with one in our office.

Here's how that played out for our IT staff... 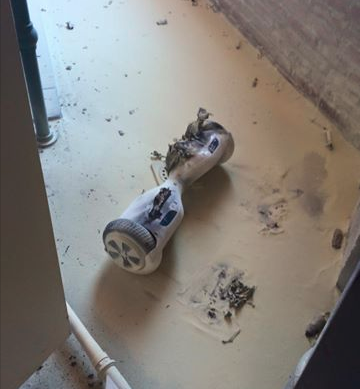 You can probably make out a wheel in the charred remains above.

As it turns out, our hoverboard exploded into a burst of flames just a few days before similar situations began to make mainstream headlines.

Now, I should be clear that this in no way reduces my enthusiasm for lithium batteries — they are still an essential part of our market and will drive lithium demand growth for decades.

However, it's only natural to assume that better safety measures may be necessary to keep this technology growing...

And you can bet on the fact that several new technologies developing right now are addressing the issue.

Today's rechargeable devices all have a system that monitors the charge on the batteries.

Beyond just telling us when our phones are dying, the system cuts off electricity to the battery when it is fully charged.

Of course, if it didn't do this, all batteries would explode when left to charge even a second too long. Obviously, the systems are not perfect, or else battery explosions would not happen at all.

Fortunately, these systems are improving all the time...

One scientist, Professor Rachid Yazami, has developed a new battery chip that he claims can more accurately monitor the charge of lithium batteries and even warn users if there is a risk of the battery overloading.

Another small bonus for us is that the chip will help the device charge quicker, and monitoring the charge more accurately will help maintain — even extend — the life of the battery.

Granted, this technology is critically important for any device, whether it's a simple smartphone battery or perhaps a 100-lb. electric vehicle battery.

Also keep in mind that this is an add-on to the device, not an improvement on the battery itself. The lithium-ion design still has a chance of overloading, even with some prior warning built in.

So let's take a look at a promising design change for the actual battery...

The newest innovation is being developed right now by the University of Maryland and the U.S. Army Research Laboratory: water-in-salt aqueous lithium batteries.

Rather than the solid layers of lithium and graphite that traditional rechargeable batteries are made of, this design places a liquid mixture of water and lithium salts between the cathode and anode.

Now, aqueous lithium batteries in the past have had a very low voltage window. The reactions in the liquid, mostly due to the majority presence of the water, can break down the electrostatic field and reduce the ability of the battery to actually hold a charge.

What's more, the reactions between the lithium salts and water create hydrogen, which can break down the electrode structure and make the battery less stable.

The new design combats this reaction by raising the concentration of lithium in the liquid mixture to the point that the lithium ions outnumber the water molecules. With less lithium-water reactions and more lithium-ion reactions, the deterioration is decreased and safety is increased.

These aspects have also about doubled the voltage ability of aqueous batteries, from less than 1.5V to about 3V.

I understand that may be a lot to digest, but the results are worth it...

The batteries are being touted as safer, non-flammable alternatives for electric vehicles or grid-scale energy storage systems. And since both of these technologies are becoming more and more popular, safety is of the utmost importance.

“By extending the operational voltage window to approximately 3 Volts, it is possible that a new generation of safer and possibly less expensive Li-ion cells could result,” says battery expert Jeff Dahn.

This is a particularly exciting assertion coming from the lithium battery scientist who was drafted to help design better, more affordable batteries for EV front-runner Tesla Motors earlier this year.

Look, up until now, the primary focus in lithium batteries has been efficiency.

Safety is the next big step, and this won't be the last new innovation in lithium batteries. As you already know, utilizing both safer and more efficient batteries going forward will push demand to newer heights...