The New Face of Big Oil

Pass On These Widow-and-Orphan Stocks

There's a reason ExxonMobil is a widow-and-orphan stock.

The American energy giant has one of the most recognizable names in the industry, and carries with it a lower risk than most other oil stocks.

After all, the company has successfully increased its annual dividend for the last 29 consecutive years, which carries a certain appeal for investors over the long haul...

Then again, we can think of better options for dividend-seekers — all of which trump Exxon's modest 2.2% annual yield.

So how does it stack up against our smaller players? 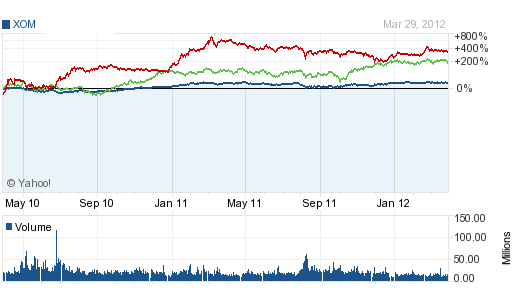 Above, you can see how just two of our latest Bakken stocks have fared against Big Oil's gains during the last two years. And it's only getting worse.

Rex Tillerson and friends are in the midst of an identity crisis.

Although the company boasts of having replaced more than 100% of their reserves each year for the last 18 years, a few things have become clear to us...

The first is that this new supply of oil and gas is becoming increasingly expensive. That much became apparent when the company announced its five-year investment plan.

Over the next five years, Exxon intends to spend $185 billion to develop new energy supplies, or about $37 billion per year.

The second is the fact that ExxonMobil is considered one of the world's top oil companies. We already know they're no longer the world's largest publicly-traded oil company. PetroChina stole that crown last year.

Truth is, the supermajors are slowly being squeezed out by the world's top NOCs: 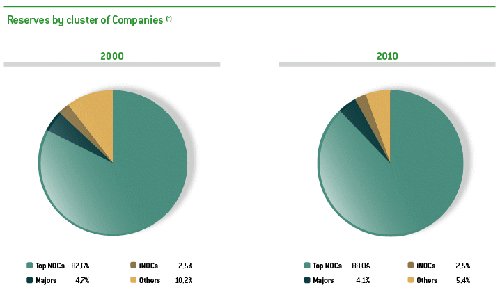 So does it really come as a surprise that Big Oil is developing a taste for natural gas?

Even today, more than half of Exxon's proven reserves are from gas, not oil.

And XOM isn't an anomaly in the industry. Nearly all the supermajors are making a similar shift... and they're more than willing to pay for it.

It's the reason Exxon shelled out $41 billion to buy XTO Energy in 2010. Without that deal, they wouldn't have been able to tout their 209% reserve replacement ratio.

Going forward, we can't expect Big Oil to outperform the kind of attractive growth stocks we've grown accustomed to in the various shale plays here in the United States.

And anyway, there's a much better opportunity developing...

We've mentioned before that technology is the key driver behind our current oil boom.

Investors who caught wind of the combination of horizontal drilling and hydraulic fracturing techniques early enough know the kind of windfall profits that are possible here...

These techniques opened up new shale formations across North America — and generated billions for individual investors throughout the last decade.

This kind of technology can turn a small cap driller into a ten-bagger in a short span of time.

I've said before the time is ripe for these new technologies to surface. That's why I felt a certain vindication when Nick Hodge pulled me aside a few weeks ago to tell me about his latest investment research.

Nick wasn't talking about some fresh new driller on the scene that hit a gusher...

No, this new investment revolves around an ultra-thin piece of carbon that can vastly improve an oil and gas company's efficiency in finding oil.