The Mother of Blow-Off Tops

Written by Christian DeHaemer
Posted May 1, 2017

The stock market is overbought. The bears have given up, and the dumb money is back.

Multiple metrics point to an expensive S&P 500. Judging by the drop in short interest and the gap down in the volatility index, the bears have given up.

On top of this, and right on cue, mom-and-pop retail investors are back. Charles Schwab reported that new accounts grew 43% in the last quarter. New investors said, “Hey, I use Netflix, Amazon, and Google — I can make money, too.”

This is the nature of stock markets. The dumb money buys at the top and sells at the bottom. When I was pounding the table and recommending stocks in 2009, few people wanted to hear it. When I said buy oceanfront condos in 2011, it was crickets. When oil was trading near $100 two years ago and I said it was going to $33, I was laughed at.

The market is going to crash; it always does. That said, it won't happen overnight. It has to suck in all of the greater fools — those who have forgotten 2000 and 2009 or weren't old enough to have invested at that time.

Overvaluation, coupled with new money, is the classic setup for a blow-off top.

Back in the real world, the numbers aren't so positive. Restaurant sales dropped for the fifth quarter — 3.4% in March. Regional bank loans have fallen by $10 billion in the latest quarter.

Iconic American brands like Sears, Bebe, Rue21, Macy's, J.C. Penney, Guess, and many others are closing stores or heading to chapter 11. You might want to use those gift cards you have lying around.

It could be that despite the banks and credit card companies wanting to loan money and interest rates remaining on the low side, Americans are tapped out.

The Federal Reserve announced Friday that the U.S. has $1 trillion in credit card debt, and it's growing.

Student loan debt is at $1.3 trillion and climbing.

Delinquencies are up as well, rising to just shy of the 2009 peak. You should know that one-quarter of auto loans are subprime. And, of course, half of all auto loans are packaged, bundled, and swapped into high-yield bonds and sold to pension funds and others who need a high yield to meet future retiree commitments.

Meanwhile, back at the townhouse, annual wage increases have been stagnant to down.

Hey Boss, I Could Use a Raise 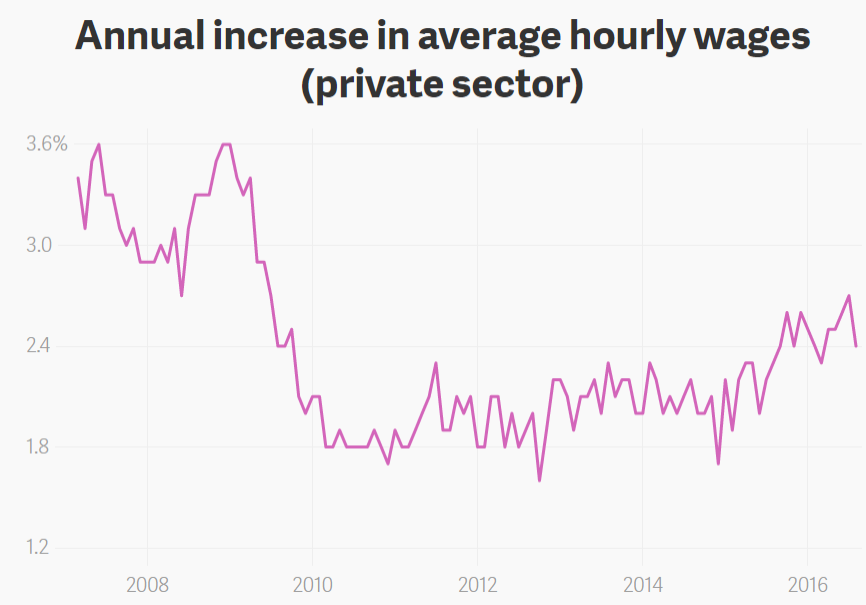 The federal government is currently $20 trillion in debt. The president wants to fix the economy by spending another $7 trillion on roads, planes, and warships. But it's not just in the United States...

According to the IMF, global debt stands at $152 trillion. That is more than double the amount from just 18 years ago. It also represents 225% of global GDP. Will it double again in another generation? Can it possible be paid down?

Someone once said that which cannot be paid off won't be.

We are much closer to a top than a bottom. The current bull market is over eight years old, the longest in history. Stocks have gained 250%, which is the fourth best.

That's a hell of a run. It is no wonder that according to Merrill Lynch, the market is overvalued in 18 out of 20 categories.

The ends of bull markets are marked by a “this time is different” feeling of euphoria. People who have never invested buy speculative stocks they don't understand at unreasonable levels. This very clearly happened in 1999 at the height of the dot-com mania. It happened again in real estate a decade ago. It is happening again right now.

Fully one-third of the gains in bull markets happen at the very end in blow-off tops. Most of the gains come from high-risk sectors such as penny stocks, tech, and biotech. In the last half of 1999, Yahoo tripled in price.

It's been 17 years since the dot-com crash, which means a whole new generation of suckers has been born to replace those who were burnt last time. They will be the ones calling you an idiot for selling six months too soon.

The way to play it is to divide your money in two segments. The first segment could be as little as 10%. You buy momentum stocks with this one — that means you chase the market darlings and ignore any type of valuation metrics.

Young, arrogant, true believers always perform best in blow-off tops. In 2009, stocks like Yahoo, AOL, and Cisco went up 10% a day for weeks. To make money this way, you need to employ a hard 20% trailing stop-loss.

The second portion of your money you put into cash, gold, or investment instruments that perform well during crises, like pawnshops, or that are not correlated with the stock market at all, like farmland.

This is what my readers at Bubble and Bust Report are doing. Join us.

Mexican Trade War
Energy and Capital editor Christian DeHaemer tells you how to profit from the great avocado war of 2017 and how to protect your portfolio in the process.
The House of Cards
Debt begets violence. South America is the canary for the global economic coal mine. But times are hard everywhere...
Sell Dollars, Buy Gold
The dollar is falling. Energy and Capital editor Christian DeHaemer tells you should sell your dollars and stock up on gold.
Hydrogen Fuel Cells: The Downfall of Tesla?
Lithium has been the front-runner in the battery technology market for years, but that is all coming to an end. Elon Musk is against them, but Jeff Bezos is investing heavily in them. Hydrogen Fuel Cells will turn the battery market upside down and we've discovered the tiny company that is going to make it happen.