An Economic Boost from Natural Gas

They can't say we didn't see this rebound coming.

The signs of a natural gas rally were all there...

After all, it was only four years ago that natural gas prices topped off at $14 per MMBtu at the Henry Hub – and it's been a hard fall ever since.

Prices reached a new floor below $2.00 per MMBtu back in April.

Thankfully, the natural gas price story has taken a turn during the last three months. 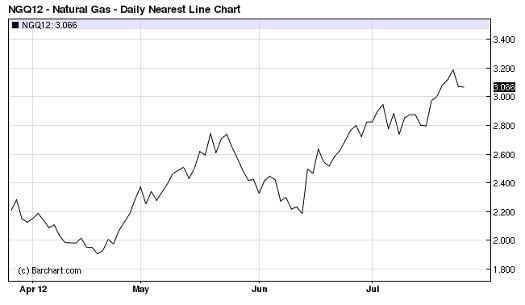 Of course, we're not actually expecting to see another pop to $14/MMBtu again.

And despite the record low 518 natural gas rigs operating (the lowest in 13 years) on U.S. soil, production is still heading higher. Data from the EIA reveals production from the various shale formations across the country is 24% higher than a year ago.

By the way, that rig count is expected to drop another 30 by year-end, leaving us with one solid option.

Before we go any further, let's have a quick recap...

The Marcellus Formation, which stretches roughly 600 miles across New York, Pennsylvania, Ohio, and West Virginia, is relatively new to the scene.

And it remains one of the best gas plays for investors... 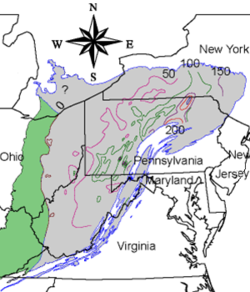 You see, it wasn't until a few years ago that companies were able to commercially produce natural gas from the play.

How much gas are we talking about?

Few other plays could boast having more.

The production growth alone since 2008 has been staggering — and nearly all of it has been coming from just one state: 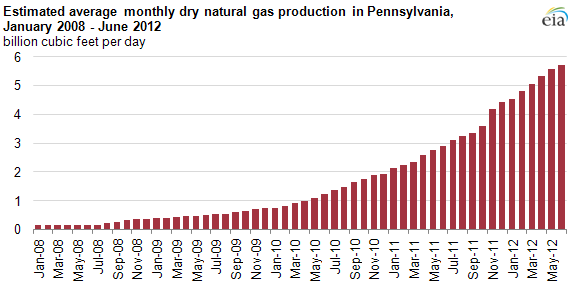 The success in the Keystone State is reminiscent of the success seen in plays like the Bakken, something we've witnessed firsthand.

You'd be hard-pressed to open a newspaper or even stand in line at the grocery store today without hearing some complaint about job growth — or lack thereof.

Meanwhile, residents of North Dakota have the veritable boom taking place in the Bakken to thank for their state's 2.9% unemployment rate.

And while the disparity between those figures seems great, they have something in common...

The oil and gas industry is responsible for the real job growth in both places.

Over the last year, employment in the mining and logging industry (which includes Pennsylvania's oil and gas sector) grew 21.2%.

And this same success story is unfolding across the United States...

In 2010, developing the unconventional gas deposits supported as many as one million jobs. In less than three years, it's projected that number will increase to 1.5 million jobs.

Even the drilling slowdown hasn't been as drastic in Pennsylvania as it has elsewhere... 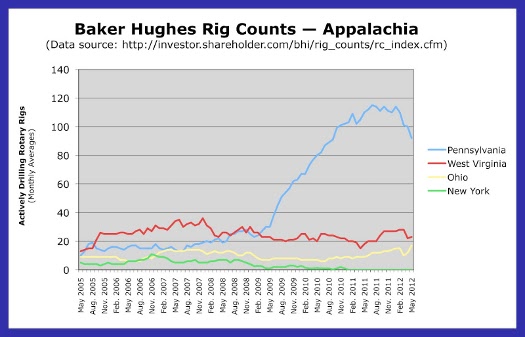 A Marcellus Stock with a Strong Upside

Last week, I suggested investors take a closer look at Cabot Oil and Gas, one of the largest players in the Marcellus.

The last time I brought it up with one of my readers, they were adamant that there was no better opportunity than the major oil companies, like ExxonMobil.

And some of you might remember when Exxon made its first venture into the U.S. shale arena after purchasing XTO Energy for $41 billion...

I'll be the first to tell you it's easy for investors to be distracted by the big names.

But how do they stack up against smaller companies like Range Resources, the company that drilled one of the first successful Marcellus wells back in 2004? 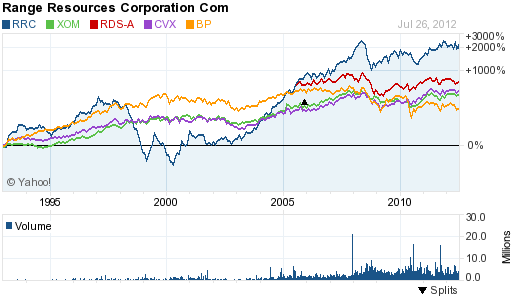 Range Resources has experienced double-digit production growth for the last nine years — and that's even with the dramatic decline in gas prices since 2008.

There's an added bonus for investors in these huge shale plays, and it's not just the producers that will come out on top...

When it comes to our shale plays, we're looking at decades' worth of drilling still to come — and profit from.

But here's the rub for these drillers: There will be much more scrutiny over the production process than ever before due to hydraulic fracturing.

Talisman Energy was recently fined by the EPA for violations at 52 natural gas wells in Pennsylvania for failure to disclose health and safety information about the chemicals used on site.

Going forward, we're going to see even tighter regulation as the debate over hydraulic fracturing rages in the media...

That's why finding a way around these regulations is so valuable for drillers and investors alike.

Here's one company solving those issues that just set up shop last year right here in the United States.