The Life of an Oil Well

All of us have a mental picture of what an oil well looks like.

For some it's huge Texas gushers from the early 20th Century, like Spindletop. For others, it's a massive drilling rig with its crew feverishly running around to keep the bit rotating.

Nearly everyone I ask, however, paints pictures of just the early stages of drilling and production. What they may not realize is there are three stages to the lifespan of every oil well: primary, secondary, and tertiary recovery.

The first is exactly what it sounds like. The oil is forced out of the well from the natural pressure present. Once the primary production hits its limit, that's when drillers go back into the well and use enhanced oil recovery techniques to boost production.

Some of the more infamous examples include the Cantarell oil field in Mexico. At one point, it was the world's second-largest. But like all oil fields do, production eventually started to decline in the early 1980s.

By 2000, Pemex began injecting nitrogen into the field, boosting production for a short time to 2.1 million barrels per day in 2004.

At some point, all companies face the decision of having to close a well. Either it doesn't produce oil anymore, or it's no longer economical to keep it flowing.

But why are the second and third stages of an oil well's life so important to us?

The Desert of U.S. Oil Production

With the mainstream media meticulously reporting on every new drop of oil being produced in the U.S., it's easy to confuse the real situation surrounding our domestic oil production.

For what it's worth, they're not completely wrong to tout the good news coming out of Texas and North Dakota. But the tremendous success we've had in tight oil formations across the U.S. isn't the whole story.

Unfortunately, most people prefer to simply turn a blind eye to it.

When I first learned how much we rely on these 'stripper wells,' however, I nearly fell out of my chair. Just take one glance at the Energy Information Administration's stats on U.S. well production and you'll understand: 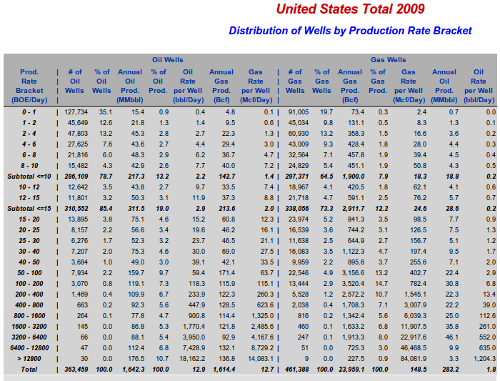 Doesn't seem like a lot at first, does it? Don't worry, I was just as skeptical when I heard it. However, you can see above that there were more than 286,000 oil wells in the United States that were producing less than ten barrels per day in 2009 !

That year, these stripper wells made up 13.2% of our entire domestic oil output, and almost 80% of total wells in the country.

So how can you take advantage of this situation?

Fact is, most people simply don't realize how much we rely on these stripper wells. They're content to listlessly sit by and wait for the next 'gusher' to be drilled.

When I brought it up with my colleague, Jeff Siegel, he was already three steps ahead of me.

“Let them have their success in those tight formations for now, because eventually it'll all come down to this," Jeff said.

“Besides, nobody understands how much crude we really have left down there. Go on, take a guess,” he asked with a knowing grin.

He laughed when I said a hundred billion barrels, “Try four times that amount... and that's on the low-end, too.”

His confidence was almost unnerving, but he was right. It isn't a secret that companies can only extract so much of the black crude from each field. The staggering part is how little they actually produce – in some cases it's less than 10% of the original oil in place.

In the case of these stripper wells, they're at the end stages of production. Enhanced oil recovery isn't some new phenomenon, either. Texas drillers, for example, have been using these recovery techniques for decades.

Why go after that remaining oil?

For a minute, let's put aside the fact that every additional barrel of oil we produce on our own means another barrel of OPEC oil that we don't have to buy.

Economic benefits will come from increasing our domestic production in the form of jobs, business activity, and more revenue. In 2007, about $30 million in tax revenue was lost to abandoning U.S. oil and gas wells. The EIA has stated that for every $1 million made by a stripper well, economic activity in the area increases by over $2 million.

Of course, the trick here is the same as in the other sectors of the oil and gas industry – it all comes down to efficiency. That is, companies need to continue improving these recovery methods.

Believe me, we're not going to leave hundreds of billions of barrels of black gold locked away underneath U.S. soil... and this is is how they'll get that oil out of the ground. You see, finding a way to increase oil recovery by as little as 5% would be extremely profitable for early investors.

On a nationwide scale, this company's technology will become invaluable to boosting U.S. oil production.