The Language of Lithium

Lithium Really is the Energy Source of the Future

Talking to people is hard.

We've all felt the embarrassment of telling a bad joke or using the wrong slang word and watching every eyebrow in the immediate area shoot skyward.

And possibly worse, many have experienced the horror of posting something online and having to swim through the onslaught of angry corrections from the entire Internet.

Case in point: one of Energy and Capital's most popular reports has a tagline that touts lithium as the energy source of the future. As soon as it went up, it was clear that people were getting fixated on that one line of text.

It's not technically wrong. But I also understand why so many people are picking on it.

So I'd like to set the record straight and explain the implications of this misunderstood phrase.

No: Lithium Does Not Make Energy

Keith actually addressed this before when he admitted that calling lithium “metal oil” was a bit much. It's a pretty common hyperbole now as the EV market continues to grow faster than anyone really expected.

But it's true that lithium batteries are replacing traditional gasoline tanks in cars at a clip. In that way, lithium will in fact be the new oil!

As of the first quarter of 2016, sales of electric vehicles had grown 42% year-over-year worldwide. This is based on numbers recorded by EV-Volumes, a database of world EV sales.

Here's the latest record the company has posted of monthly sales since 2014:

You can see there's been steady annual and seasonal growth, even though this is still a relatively new market.

Meanwhile, overall car sales are dropping. The past few months have seen scores of reports from Ford, GM, Volkswagen, and the like that numbers continue to slip. And now to keep up with the changing tides, every one of them is coming out with an all-electric vehicle.

Don’t expect to see lithium take over for oil right away; we’ve still got a long way to go. Just know that’s what we’re talking about when we liken this metallic commodity to a liquid one.

Yes: Lithium Can Be a Source

Technically, energy does come from lithium batteries... just not originally.

Where the energy comes from in the first place varies from country to country or, in the case of the U.S., state to state.

This has actually been one of the biggest sources of controversy in the lithium battery movement because, unfortunate as it is, a large portion of the world still gets its energy from dirty coal power.

As recently as 2014, the world was getting 40.8% of its electricity from coal, according to the International Energy Agency. Since then, slightly cleaner natural gas has made some major strides but hasn't overtaken the dominant energy source just yet.

However, many countries are working on that problem right now.

Countries like Germany and Costa Rica are already getting most of their energy from renewable sources, wind and solar especially.

In the U.S., the infamous Tesla Motors has its sights set on taking over this market as well. In fact, that's the whole goal of its SolarCity buyout. CEO Elon Musk wants to absorb SolarCity into Tesla Energy and create a fully integrated system wherein all Tesla vehicles, Superchargers, and Powerwall batteries are directly powered by solar panels.

That's just one small step, all things considered. The Energy Information Administration expects that solar power will account for about 1% of total U.S. energy production as soon as next year and keep right on growing from there. 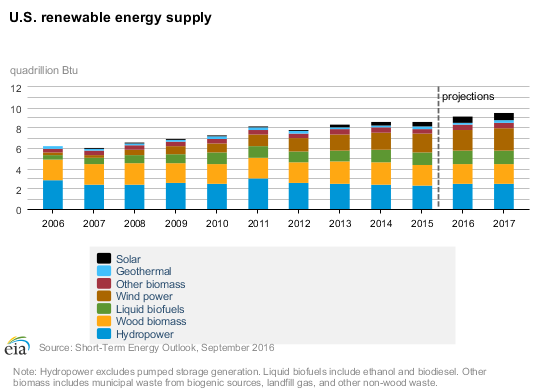 For the record, a large portion of that energy will be coming from lithium batteries, whether you accept that phrasing or not.

You see, the U.S. energy grid is in dire need of an upgrade. As it stands now, we can't just plug new energy sources into it and call it good. If it were that easy, it would already be done; the technology is already leaps and bounds stronger than it was just a few years ago.

But the grid can't handle it. It's too old to jive with the young, hip energy technologies developing today. There will be a long transition period where we're working to get the grid up to speed while also shutting down older fossil fuel capacity to make way for renewables, and there's no doubt we'll be needing an interim solution.

What's more, since solar, wind, and even hydropower can be intermittent due to uncontrollable weather, those batteries will be making a permanent home in our energy system. They'll have to just to keep everything running!

We know lithium can't make energy on its own, but much of our energy will be coming out of lithium batteries in the future. And that's more than enough to get investors interested.

I mean, consider how much of our technology already relies on these batteries! You may be reading this on a lithium-powered laptop or mobile phone right now; if not, you probably have those devices nearby.

And it won't stop there. The growth of the Internet of Things is already creating a wider array of mobile, rechargeable devices that need lithium batteries to function.

So if you can look beyond the hyperbole, you'll definitely be able to see the valuable lithium investments on the other side. It's not a commodity we're looking to let go of anytime soon.