Why the U.S. Dollar Will Fail in the Next 1 to 3 Years

Let me ask you a question: do you know why one of the most iconic societies of the ancient world completely died out?

I’m talking about the Greek city-state of Athens.

This ancient culture is arguably the genesis of Western society as it exists today — poetry, art, drama, philosophy, critical thinking processes, modern medical practices, due process in court... democracy itself goes back to the Greek Athenians.

And yet, even without a paper currency and even with all their collective genius, the leaders of Athens were not immune to debasing and inflating their own currency.

You see, Athens is the first culture in the ancient world to use gold as a standardized and measured unit of currency. Although gold had been used as money since ancient Egypt, Athens was the first to produce coins worth varying amounts into circulation.

Yet, at one point, Athens found itself blowing the budget on two particular things: social programs and an expensive war with Sparta.

In order to pay for these things, Athens decided to make its money go farther.

Let’s say they took in 1,000 gold coins in taxes. They would then melt these coins down and produce new coins, the trick being they would use 50% copper and 50% gold.

At first the Athenian population took these new bronze-faced coins at face value.

Yet after a while, so many of these copper/gold coins were put into circulation that prices began to rise.

And, as per Gresham’s law, which states in a nutshell, "Bad money drives out good," the Athenians began hoarding the pure gold coins still in circulation, as they were more valuable.

Those pure gold and silver coins disappeared from circulation. Suddenly, it took a whole lot of copper coins to buy a single gold coin, and the world experienced its first hyperinflation.

This contributed directly to Athens’ downfall.

Aristophanes wrote of the currency in 405 BC:

The ancient coins are excellent in point of standard; they are assuredly the best of all moneys; they alone are well struck and give a pure ring; everywhere they obtain currency, in both Greece and in strange lands; yet we make no use of them and prefer those bad copper pieces quite recently issued and so wretchedly struck.

Looking throughout history, the same story of failing empires arises again and again.

The government begins paying for too many expensive social programs to gain the favor of the masses and involving itself in expensive wars to drum up nationalism... To pay for this, it debases its own currency. This in turn causes deficit spending; people begin hoarding assets and driving up the price; and hyperinflation occurs, causing total economic collapse.

The question is, how close is America to becoming a failed Athens?

The Highway to Hell

Did you know that in 1981, when Ronald Reagan became president, the national debt was $591 billion?

Yet from 1981 to now, in one generation, there are 33 times more dollars in existence than in the first 205 years combined.

It took just three and a half decades to go from $591 billion to $20 TRILLION in debt — that’s a number most of us can’t even fathom.

And that’s only going to grow.

Just look at this chart... 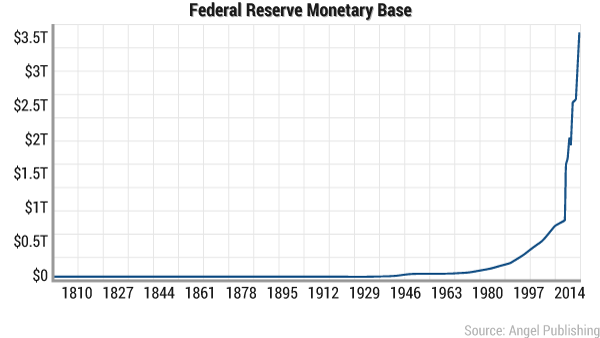 What you see here is right after WWII in 1944, when the Bretton Woods system began and the U.S. started printing more money than it had gold available.

Then, after Nixon took the dollar completely off the gold exchange standard, we began printing money like crazy due to expanding social programs and the Vietnam War.

Yet it wasn’t until two defining events occurred that the printing presses went into maximum overdrive.

The first was the dot-com bubble of the early 2000s, after which the U.S. economy experienced a turbulent post–dot-com bubble recession agitated by September 11th.

This, paired with a brand-new post-9/11 war, caused the Federal Reserve to start printing more money than it ever had before.

Yet none of that compares to the debt creation that occurred directly after the 2008 financial collapse.

According to a 2014 Harvard study:

If the Federal government spent its yearly revenues exclusively on debt reduction and ceased all of its operations, it would take three to four years to pay down the national debt. Or, the government could pay down the debt in one blow if it simply took more than $52,000 from every person living in the U.S. — including children, the elderly, and the unemployed. If this one-time "debt reduction fee" were levied only on those in the workforce, the cost would be over $106,000 per person.

Just like Athens and every other failed empire throughout history, the government has begun debasing its own currency. It has created a debt it can never pay back. It is creating money out of thin air.

Spending more money to buy less stuff is the definition of inflation.

As you can tell by this chart, inflation is coming.

The specter of inflation rides again:

This is why I recommend you invest in items that have intrinsic value. When inflation goes up and the dollar goes down, these assets will rise with or higher than inflation.

In my newsletter Bubble and Bust Report, we’ve been putting together a recession-proof portfolio. Join us, risk free, and for less than a pair of shoes, you can save your wealth and even prosper in the dark times ahead.

5 Predictions for 2017
Energy and Capital editor Christian DeHaemer makes five bold predictions for gold, oil, defense, housing, and interest rates.
Paps Hated FDR So Much He Wouldn't Use Dimes
Just like in 1930, we have economic experts warning our president not to go down the road of trade wars. Like Hoover, Trump's not listening.
Hot Stock Tips from the Bartender
Energy and Capital editor Christian DeHaemer tells you why the market will die in a flaming ball of hot gas after the Trump State of the Union.
Yes, Money Does Grow on Trees
Energy and Capital editor Christian DeHaemer explains why the price of lumber is going to soar... And how you can profit off it.
Hydrogen Fuel Cells: The Downfall of Tesla?
Lithium has been the front-runner in the battery technology market for years, but that is all coming to an end. Elon Musk is against them, but Jeff Bezos is investing heavily in them. Hydrogen Fuel Cells will turn the battery market upside down and we've discovered the tiny company that is going to make it happen.