The End for OPEC Crude

Which is why this group of twelve countries is referred to as the Organization of the Petroleum Exporting Countries.

What they haven't considered is that OPEC production will peak.

And that day is fast approaching.

OPEC total oil production has seen a net increase over the past decade...

In 2002 OPEC nations were producing 28.97 million barrels per day. By this year, that's expected to have risen to 36.64 million bpd. That's a jump of more than one million bpd from last year — and the same increase seen every year since 2009.

But the projections for the future are not quite so optimistic.

By next year, OPEC production will remain relatively stagnant with an average production of 36.83 million bpd.

As a matter of fact, production from the region is already showing signs of weakening...

Its monthly production this year climbed through April, but began to fall in May and June — all the while remaining above 36 million bpd.

The last several months have seen a rapid drop.

A Dow Jones Newswires survey released this week reveals OPEC production was down in October to 31.32 million bpd, according to industry insiders. That's a fall of 350,000 barrels from September, a number the same analysis put at 31.669 million bpd — down nearly five million from June.

The survey attributes the drop to a fall in production from Nigeria and Iran.

Iran's decline was, of course, due to the oil sanctions imposed in response to the nation's covert nuclear program. Nigeria, meanwhile, had flooding in the Niger Delta and a wave of attacks on oil pipelines.

And that's the problem with OPEC...

The majority of the nations are located in the Middle East and Africa — areas plagued with war and civil unrest. If dwindling resources don't cause peak production, unrest surely will. 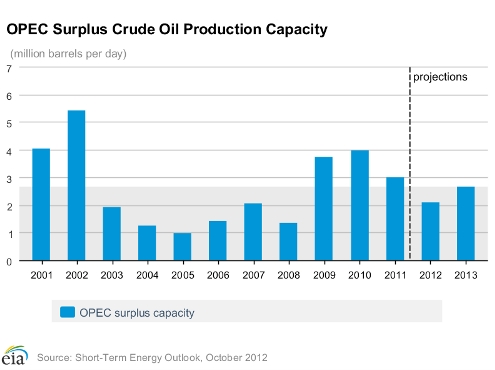 Meanwhile, non-OPEC production is picking up... and the nation seeing the fastest growth is none other than the United States.

That's right — the United States' crude oil and liquid fuels production is growing faster than any non-OPEC nation, faster than Canada, and faster even than major European supplier Russia: 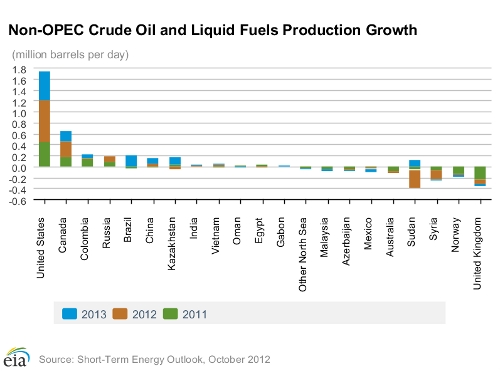 Of course, it's the domestic shale production that is helping speed up this growth, as well as significant offshore auctions in the Gulf of Mexico.

But the real boom is from technological developments: Enhanced oil recovery (EOR) techniques, horizontal drilling, and different methods to make this horizontal drilling even more profitable are allowing drillers to produce oil that's essentially been stuck in reserves for years.

And the companies taking advantage of these techniques will be the ones to push production even further.

We know plenty of OPEC members aren't all that fond of us, and yet we continue the relationship.

However, as our own production picks up, we get one step closer to kicking OPEC to the curb. And while we might not be able to stop imports completely, we can certainly get along without the sour relationship...

Brianna Panzica
for Energy and Capital

When to Buy Silver: Another Europe Bailout Will Push Silver Higher
You can't spend your way out of a debt crisis. The world has to eat the pain at some point... sooner will be less painful than later.

Nano Gold Jumps 10%: They Just Blew the Doors Off Earnings...
Nanotechnology will change your life faster than the automobile did your grandparents'. It will be a turbo-charged industrial revolution.

Last Chance, Congress: Will Washington Listen to the Hand that Feeds Them?
A group of one hundred CEOs called on Congress to do something — ANYTHING — about the fiscal cliff. Will Congress will listen to their paymasters... or is partisan gridlock too powerful?

No-Spin Investment Ideas: Tune Out the Noise
You've really got to think about what your goals and expectations are... and about how you're going to reach them in the confines of the current market reality.

Another Record Broken by the Oil Industry: Exxon Drills 13 Miles to Reach Billions of Barrels of Oil
While American companies perfect horizontal drilling and hydraulic fracturing with multi-well pad drilling, another technology is quickly emerging on the scene...

It's Not Easy Being Green: Are Green Energy Profits Rigged to Fail?
Editor Keith Kohl digs deep behind the government-backed loans for renewable energy sources and shows investors the ugly face of green investing.

Innovate or Die: Why This Oil Stock is Undervalued by 50%
Five years ago the Marcellus Shale was just a rock formation under the Appalachian Mountains... Today it's the biggest natural gas field in the world, based on reserves.