Staring Down the Peak Oil Curve

Last year, it became obvious to us that Texas shale was going to get a lot of attention in 2011.

Truth be told, the timing couldn't have come at a better time for the state...

Because while Texas is far and away our largest oil-producing state, Peak Oil hasn't been an easy pill to swallow. The state's oil production has plummeted nearly 60% during the last thirty years!

Even when oil prices jumped to $150 per barrel back in the summer of 2008, the state's production nearly fell below one million barrels for the first time in decades.

Investors aren't completely without hope, however.

In South Texas, the oil boom is alive and well in the Eagle Ford shale formation. 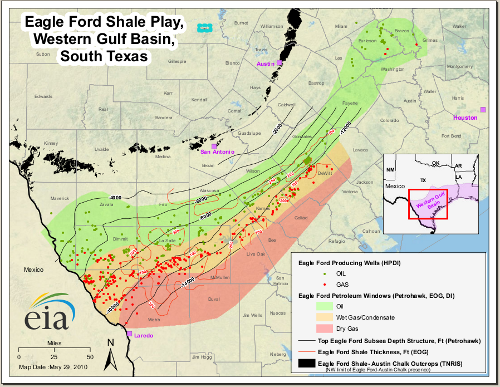 What is the Eagle Ford shale?

Approximately 50 miles wide and 400 miles long, the formation stretches across more than 20 counties from the Mexican border to East Texas. The formation is found directly below the Austin Chalk shale at depths between 4,000 and 10,000 feet.

At stake is more than 3 billion barrels of oil that drillers will extract using the latest horizontal drilling and fracturing technologies.

Over the next several years, the Eagle Ford is expected to add about 420,000 barrels per day to our domestic production.

The first Eagle Ford well was drilled by Petrohawk back in 2008, and today there are approximately 16 fields (before field consolidation took place, there were nearly twice that number).

But we're not here to dwell on the past. Because there's a veritable boom happening right now to develop the formation's oil and gas resources.

According to data from the Texas Railroad Commission, the number of permits issued for the first eight months of 2011 has already topped the combined total from the previous three years: 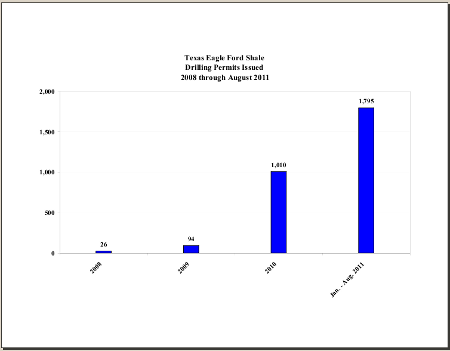 Furthermore, crude oil production from the formation during the first six months of 2011 nearly surpassed the previous year's total: 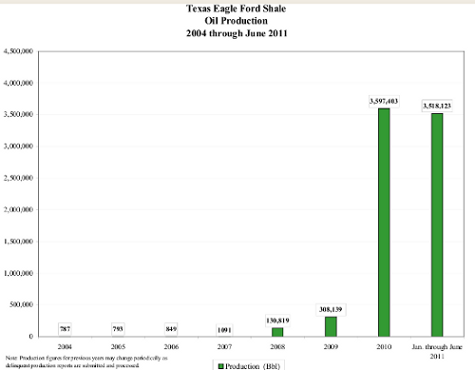 The state is expecting the number of permits to grow five-fold during the next four years.

The economic benefits alone are well worth the efforts. The oil and gas development is projected to generate $13.9 million to the area in 2011 and grow as high as $50 billion in 2020.

This kind of economic boom isn't that far-fetched; North Dakota — home to the Bakken shale — has completely sidestepped the recession. Unemployment there is sitting at 3.5%.

If nothing else, all that activity has drawn a lot of attention — and not just from domestic companies looking to tap the Texas soil. Everyone is trying to get a piece of the action:

Very few things in life go off without a hitch, and the shale boom faces a major obstacle before the public opens its arms to full-blown development...

It's with this development you can take your investments a step further.

Although the hydraulic fracturing process itself has been around for more than a century, the first commercial fracturing job happened in 1949.

Vilified in the mainstream media, the process has been under fire ever since shale production began hitting headlines. Let's focus on one drawback for now: water usage.

In 2006, companies drilling into the Barnett Shale area used about 450 billion gallons of water in the process.

You can imagine how tight things are considering Texas is suffering from one of the worst droughts on record, with more than 95% of the state listed as experiencing severe or exceptional drought...

Without water, shale production could be in trouble. In order to tap the oil and gas resources in plays like the Eagle Ford shale, each well requires millions of gallons of water to fracture the rock formation.

But that might not be 100% accurate — and U.S. shale drillers are getting a second crack at unlocking their oil and gas reserves without using a single drop of water.

The best part is that this small fracturing play recently set up shop in the heart of the Texas oil industry — including the Eagle Ford shale.