The Death of Coal Plants

EPA Puts an End to Coal

Brace yourself for Monday.

We've seen this bitter battle between the U.S. government and the coal industry rage for years, and the EPA has spent the last few months finalizing the details of a new round of regulations aimed at cutting pollution from U.S. coal plants. (Let's not forget, by the way, that this coal-generated power makes up 40% of the grid.)

Essentially, the EPA wants to cut carbon emissions by 20%, and the rules will go into effect next year.

If you remember, the President tried this before when he attempted to push a law through the House in 2009 that ultimately died in the Senate. Now, he's looking to do an end-around past Congress to ensure his anti-coal agenda goes through.

As you might expect, some of these new rules will have coal producers foaming at the mouth...

To reach the 20% reduction, Federal Register records show that the EPA has already developed standards for new coal plants to limit emissions to 1,100 pounds of carbon dioxide per MWh of electricity.

The current average for older power plants is about 2,250 pounds of carbon per MWh, so we can expect them to have to transform their plants, cut production, or fail.

After the EPA sets those required limits on carbon dioxide emissions, it will largely leave enforcing the new restrictions up to individual states.

Among the options is transitioning to renewable energy and natural gas, as well as artificially raising the price of coal, as many states have done already.

Carbon taxes and cap-and-trade programs will most likely be how the majority of states comply with the new guidelines.

As you know, cap and trade involves setting a cap on emissions and then issuing permits to producers up to the amount that the cap limits. If the producers need more, they have to pay for a permit from another firm that doesn't use all of its permits.

In effect, this puts a price on pollution. It also brings our long-winded governmental bureaucracy ever closer to power generation by having it issue permits.

If you've been following the LNG export situation, you know full well that the government is extremely adept at dragging its feet on issuing permits.

The states could also decide that a carbon tax is the best way to go, both raising revenues and adding incentives for reducing emissions... except more taxes will create a backlash among regular folks who don't want their energy bills to rise.

Either way, all of the proposed solutions put the government very close to the energy sector, and each one will inevitably raise the price of coal so that utilities will cut back their use of it.

How to Play it

Whether or not you agree with raising the price of coal and cutting carbon dioxide emissions, there's always a sound group of individual investors who know where to look.

No matter how these new regulations are put into place, we can't count out coal completely. We still use a staggering amount of coal right now, and the initial shock of the regulations will inevitably lead to coal stocks taking a beating — again.

But the big moneymaker here lies in global demand...

As the chart above shows, export value for coal has steadily been on the rise, and even though it slumped last year, the new EPA rules will make exports much more attractive for U.S. coal companies.

Believe me, both India and China will be craving the kind of cheap energy coal offers.

The Big Winner Is...

Despite the more attractive prospect of exporting coal, the real winner from all this governmental red tape will be the natural gas producers who will inherit coal's share of our power generation.

Actually, power plants all over the U.S. are already expanding their natural gas capacity... 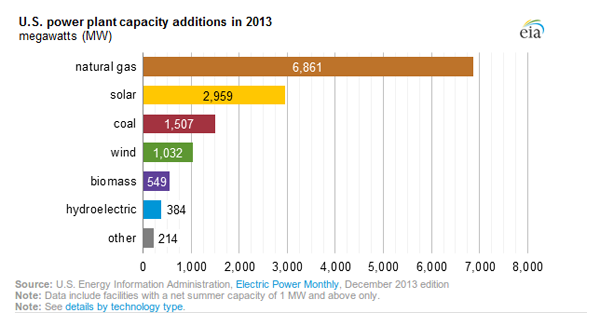 Expect this to increase even more over the next year and beyond as utilities prepare to follow through on the new rules and coal consumption in America cools down.