No Silver Bullet in Biofuels

Are we hurtling head first into a biofuel disaster?

Regardless of one's personal feelings on the matter of biofuels, there's absolutely no question that the U.S. is using more each year. During the last decade, consumption of biofuels in the U.S. grew 687%!

My colleague Jeff Siegel even pointed out the folly of the ethanol scam earlier this week. Of course, the story is even more absurd after a recent report suggested that burning corn might emit 7% more carbon dioxide gases than regular gasoline.

But we already know biofuels are no silver bullet for our oil addiction. Not only do biofuels have a lower energy content than gasoline and diesel, but the hard pill for most people to swallow is that it's the same for most of the transportation fuel alternatives available: 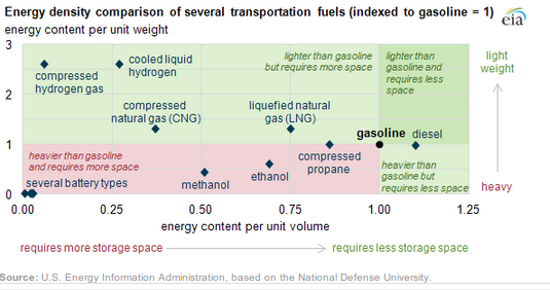 Besides, if we could use ethanol as a substitute for gasoline, wouldn't our Midwest states at least be able to reduce their oil imports?

That simply isn't the case, and the amount of oil being imported into the Midwest region has actually increased 179% since 1999.

Can things get any worse?

From Ethanol to Oil: More Tales of Land Misuse

Given the current energy boom taking place on U.S. soil right now, it's almost impossible to mess things up... almost.

But if anything out there can screw up a good thing, it's the clump of red tape emanating from Washington, D.C.

At least, that's the conclusion we reached after the Congressional Research Service published a report that highlighted oil and natural gas production on federal and non-federal lands.

Let's face it: striking oil and gas today is like shooting fish in a barrel.

It turns out there is one particular area where production has slumped over the last five years: on federal land.

The congressional report showed that oil and gas production on federal land has been anything but booming.

One of the major obstacles has been the processing of applications for drilling permits.

In 2006, 10,492 onshore drilling permits were received by the Bureau of Land Management, with 8,854 permits processed.

And despite the BLM receiving 59% fewer permit applications in 2011, it only processed 5,200. On average, a typical drilling permit took 307 days to process its approval decisions.

Granted, things were slightly better last year, when it took the BLM only 194 days to process these applications. And we also have to take into account the additional days it took for the industry to resolve any deficiencies in the permit application.

Unfortunately, the BLM's red tape considerably lengthened the procedure. Between 2008 and 2013, the BLM added an average of 88.3 days to the entire approval time frame.

Below, you can see how much time it takes for the whole permit process, and it's no wonder complaints against the BLM are piling up. 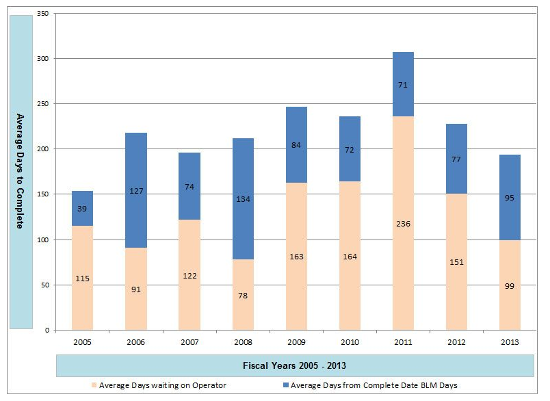 Is this really the most efficient way to handle these permits?

Comparatively, it took state agencies just 10 days on average to approve permits for drilling on private lands in their respective states.

Believe me, that's not a coincidence. And it's exactly why oil and gas production is strongest on non-federal lands.

In fact, this single Texas oil stock trading under $10 right now is a perfect example of how individual investors are taking advantage of the situation.