The Next Step for the Bakken Oil Formation

Be sure to read Energy and Capital's up-to-date resource page on the Bakken oil field.

Up until a few years ago, the Bakken was known only as a bailout zone.

In other words, drilling the Bakken was nothing more than a last-ditch effort for oil companies; it helped those companies recover a tiny bit of their investment.

However, new advances in horizontal drilling and one USGS report later and this bailout zone has become a hotbed of activity.

After watching the good news pour out of the North Dakota Bakken within the last few weeks, it's impossible not to take notice.

It's not just the record $71.6 million from the latest oil lease auction that has caught our attention. . .

When North Dakota made the move to become the fourth-largest oil producing state, other people still don't get it; and overtaking Louisiana for the fourth spot won't be nearly as impressive as when North Dakota moves past California.

Production is expected to grow to over 400,000 barrels per day in the next five years. Meanwhile, California continues to slide down the backside of peak oil.

Do you honestly believe California will be able to reverse their production decline?

I didn't think so, either.

Clearly the Bakken has become much more than a bailout zone and things are only going to get bigger going forward.

You see, I wasn't kidding when I said the second Bakken rush has begun. And judging by the amount of reader mail I get on a daily basis, it's safe to say that most of you have come to the same conclusion. More importantly, we've also realized just how profitable our Bakken investments have become.

The problem, however, is that peak oil is more than just a U.S. concern. Even more troubling is how easy people simply dismiss the bad news — even more so when the strings are being pulled by politics.

Were you surprised after a whistleblower came forward last week, accusing the IEA of being politically distorted?

When one-quarter of the world's oil production comes from just twenty fields, you'd think people would be a little interested in the fact that the largest of those fields are well past the peak.

Need an example of how bad things can get?

Within the next few years, production will be completely shut. Six years ago, the Cantarell field was the third largest oil field in the world.

At this pace, peak oil is costing Mexico about $14 billion a year. If you think that isn't so bad, take this into consideration: Approximately 40% of their government's annual budget is from oil exports.

Naturally, Mexico's fate has serious repercussions for the U.S. Despite the dramatic production decline at Cantarell, Mexico is still the second-largest source of oil for U.S. imports.

But that's enough of the doom and gloom for today.

For my long-time readers, this should be old news. Just take a look at one of the Bakken stocks we've been following here at Energy and Capital: Whiting Petroleum (NYSE: WLL).

In fact, the last time we talked about this company was at the end of July. At the time, I had mentioned that since oil bottomed in March, Whiting performed admirably for investors. Although I wasn't expecting a similar run, any gain you can take off the table is a win in my book.

How has it done since July? 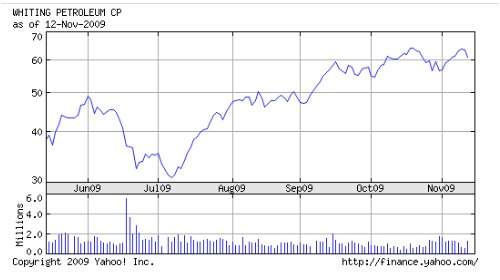 As you can see, Whiting has posted a healthy 42% for my readers.

However, we're about to hit the next stage for the Bakken formation.

Last week, I said there was one part of the Bakken that has yet to shine. Let's face it: the one downside to the Bakken formation is the lack of infrastructure.

You see, it's not just an exploration game.

With more than 4,500 active oil wells in North Dakota, my only question is: How quickly will the Bakken be developed?

It doesn't take a crystal ball to see where this is going.

One of the pressing issues over the next several years won't be how to increase production. Instead, it's going to revolve around how to bring that production to market. Of course, members of the $20 Trillion Report are going to have a front-row seat to these gains. Although most of you are already on board for this second Bakken rush, it wouldn't be fair if I didn't offer my newer readers the same opportunity. You can check out the details here.

I can only hope you won't sit this one out.