+Building an Empire in the Eagle Ford

Yesterday's big energy headline may have been the EPA's carbon emissions limits, but another bombshell quietly dropped on Monday that will have a ripple effect for the next two decades.

You see, the International Energy Agency released its World Energy Investment Outlook for 2014, and its findings were startling to say the least.

The report concludes that the world needs to see $48 trillion in energy investment between now and 2035.

Roughly $40 trillion would be for maintaining and developing our existing energy supplies, while the remaining $8 trillion would need to go towards energy efficiency.

In other words, this equates to $2.5 trillion per year in investment that's needed to supply the world with enough energy to continue our current way of life.

The report also said the scenario could be much worse if investment doesn't pick up soon...

Due to the tumultuous energy situation in the Middle East, the IEA said we would have to brace ourselves for a $15-per-barrel jump in oil prices by 2025.

And as much as our addiction to oil from the Middle East increases our vulnerability, the simple fact is that we can't survive without it... for now. Remember, we were on the hook for 3.3 million barrels per day in March.

Also consider the sobering fact that global energy demand will inevitably rise as our population swells, leading to runaway consumption levels as more and more people try to improve their standards of living... 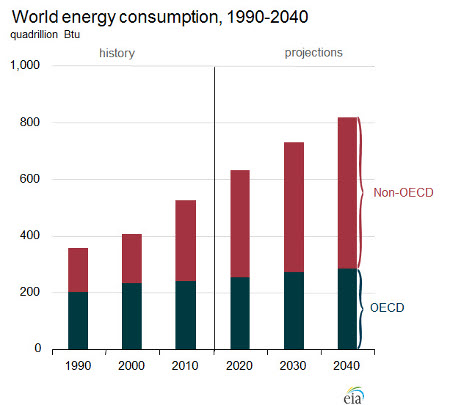 Unfortunately, the IEA's announcement comes on the heels of President Obama's new anti-coal initiatives, which gut any incentive for investors to put their hard-earned cash into the coal industry.

And while the new rules are very bullish for natural gas and most other fuels, we certainly can't leave out coal.

Still, even with the EPA hindering coal use in the U.S., there's no question that coal will still play a vital role in the global energy picture during the next 25 years: 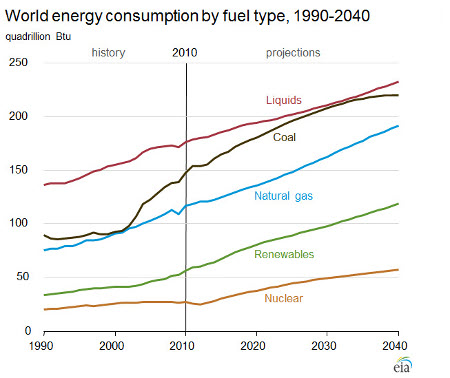 But let's put this into perspective... Last year, the world invested more than $1.6 trillion in energy, which is far behind the required $2.5 trillion necessary PER YEAR to keep up with increasing consumption.

Although this may sound like bad news, investment is still rising, and there's no reason to think it won't continue to do so — especially as North American energy companies keep building empires in areas like the Eagle Ford Shale.