Tesla's global reach has made it bestselling luxury electric vehicle in the world, and that fame is spreading across Australia.

The company's first car, the Model S, was available in Australia as of late 2014 and about 200 of the luxury vehicle have been delivered since.

Now, as the popularity of EV's spreads across the continent, so too are Tesla's Supercharger stations. These stations are free to use for Model S owners, and will continue to be free for future Tesla vehicles. 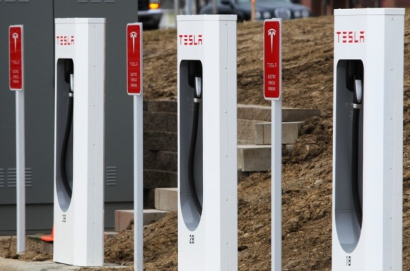 Tesla already has almost 10 High Power Wall units supporting several Superchargers in the most popular areas of the country. Most are around hotels or shopping areas such as the Park Hyatt Sydney, Westfield Chatswood shopping centre, and The Observatory in Port Macquarie.

The expansion of these charging stations is meant to create a whole network across the landscape of Australia. Current stations are going up in the most populated areas and have already connected drivers in Sydney and Melbourne, and soon Goulburn will be reachable too.

But Tesla wants to go further, connecting the current areas to Brisbane and eventually all the way to the Adelaide area.

Meanwhile, the existing Superchargers are boasting a huge boon for EV drivers: where many public charging stations are set up in places where the vehicle will be left to charge for an hour or more at a time, Tesla's only require about half an hour. In that amount of time, the vehicle will have 120 kilowatts available and be able to drive about 270 kilometers on that amount.

Tesla now has the fastest growing electric vehicle charger network in the world with 2,705 Superchargers in 480 Supercharger stations according to the company's website.