This year's North American International Auto Show in Detroit kicked off this week. The show has so far been light on showcasing electric vehicles, but it hasn't lacked them entirely.

Companies with new electric vehicles or plug-ins on the way, like Nissan (TYO: 7201), for example, may not have discussed them in their press conferences. But the vehicles were there.

Nissan recently announced it would roll out an updated version of its LEAF, and a model was on display at the Auto Show. The vehicle is to have a starting price of about $28,800 before rebates, which could bring the price as low as $19,000.

Via Motors revealed its X-Truck, a large electric truck with 800 horsepower. The company is exploring contracts with PG&E (NYSE: PCG) to create vehicle-to-grid connections for emergency situations such as mass power outages, PluginCars reports.

And Tesla Motors (NASDAQ: TSLA), the company whose much-anticipated Model S was released last year, had more to say on the next project it's working on.

The Model X isn't new news to Tesla fans. It was officially unveiled by CEO Elon Musk back in February 2012. But a preproduction model was finally on display at the Auto Show on Monday. 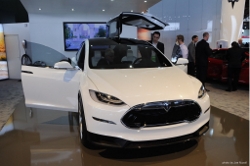 Set for deliveries in 2014, the Model X is Tesla's first luxury SUV. The company revealed additional details about the vehicle in a press conference at the show today, calling it a “continuation” of its first car, the Model S.

The company compared the vehicle to a Porsche 911 – but better, since it's electric.

It will feature what the company has dubbed “Falcon Wing” doors. The design is similar to the “gull wing” doors present on the DeLorean of the 1980s, but rather than swinging back and up, the doors rise straight overhead.

With its three rows of seats, the vehicle can seat the driver and up to six passengers. In its model presented at the auto show, the interior uses a mixture of white and black, with each row of seats covered in alternating colors.

The alternating color scheme continued throughout the entire car, both inside and out. Like the Model S, the car comes with the options of a 60 or 85 kWh battery and a 17-inch touch screen for entertainment, navigation, and even some controls for the driver.

But this is an SUV, capturing an audience the Model S cannot.

From the Windsor Star:

“We looked at the marketplace and realized that minivans are incredibly practical and they serve a great purpose, but you kind of sell your soul a little bit in order to get that practicality,” said [chief designer Franz] von Holzhausen. “An SUV or crossover has all the character and styling you want in a vehicle but not necessarily that practical in its usability.”

But according to Tesla's website, the Model X combines “the best of an SUV with the benefits of a minivan, as only an electric car can.”

Though the company has yet to reveal a specific price tag for the new vehicle, von Holzhausen indicated that it would be between 5 and 10 percent more than the Model S, which starts at $57,400.

Tesla also announced a plan to expand in 2013. The company currently has 33 stores across the globe, with 23 in North America. It added 13 of those last year alone.

This year, the expansion will move ahead even more quickly. The company has plans to open a total of 25 retail locations, including its first Chinese store, with half of the locations in the U.S.

And it's still planning a cheaper electric vehicle, with a tentative date set for 2016. This new car will be priced closer to $30,000 – in line to compete with the BMW 3 Series, the company announced.

“We want to take away every hurdle there is to people driving electric cars.”

While a $30,000 vehicle may not take away every hurdle, it could come close to doing what Nissan plans to do with its lower-priced LEAF.

Blankenship claims that the company's mission is to reduce the use of fossil fuels, not just sell cars, the Detroit Free Press reports. This is reflected in the sales model – you can walk into a Tesla store without feeling pressured to buy a car.

And as the company evolves to support a wider customer base, its mission will move forward too.