A good friend of mine recently took delivery of a brand-new Tesla Model S.

This is the electric car you've read about in these pages before: a sleek, all-electric vehicle boasting high-end luxury, state-of-the-art design, and an all-electric driving range of 300 miles... 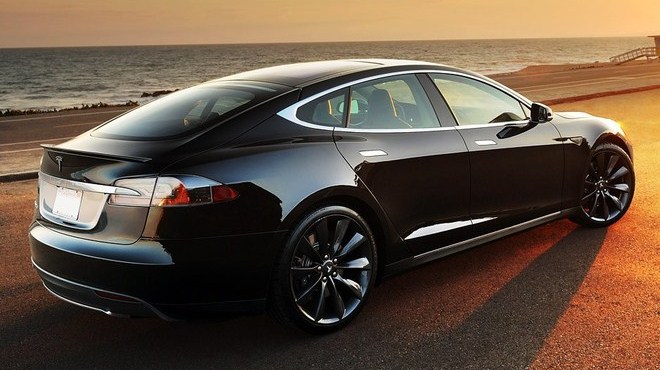 Not only is the Model S a top-notch vehicle that crushes every other electric car available in the marketplace today, but its ability to travel 300 miles on a single charge has proven to be a serious game-changer in the world of electric cars.

In fact, in the first quarter of this year, Tesla delivered more electric cars than any other automaker selling electric cars.

Remember, this is a small, Silicon Valley start-up competing against the manufacturing muscle of companies like GM (NYSE: GM), Nissan (PINK SHEETS: NSANY) and Ford (NYSE: F). And they're crushing it, thanks mostly to the fact that the Model S provides the kind of driving range that calms the nerves of those who worry about their electric car running out of juice.

It also doesn't hurt that this pure-play electric car company has been building a network of charging stations across the country...

Here's a map of the projected network to be completed in less than two years (much of the Northeast corridor and a string of stations along California are already in place and operational): 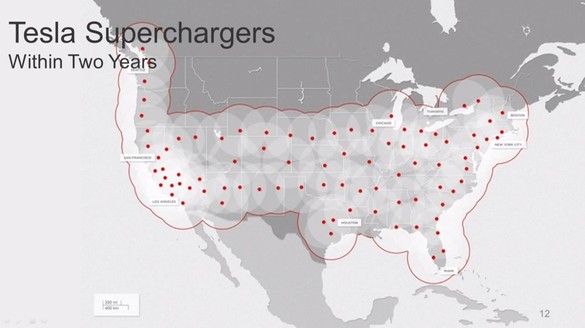 Bottom line: In these early days of electric vehicle integration, the ability to provide exceptional all-electric ranges is paramount to any electric car manufacturer's success.

Of course, while 300 miles on a single charge is worthy of respect and admiration, the truth is in another six or seven years, 300 miles will be considered the “low end” of what is possible for commercially viable electric cars.

An Israeli-based tech company announced last month it has developed an electric vehicle that can travel 1,000 miles on a single charge. The vehicle is “fueled” by a lithium-ion battery and an aluminum-air energy system that uses the energy released by the reaction of aluminum with oxygen to generate power. And because the system is mechanically reloaded, charge times are quite fast.

The company behind this technology, Phinergy, claims it will have production volumes ready in 2017.

In the meantime, there are plenty of other tech companies and universities looking to get a piece of this action as well...

Take the new microbattery recently developed at the University of Illinois. This is essentially a millimeter-sized battery that has the ability to jump-start a car battery and charge a cell phone in just a few seconds.

Although the battery technology is currently focused on personal electronics, the possibilities for these microbatteries in electric cars are quite enticing, as this technology can help shrink battery sizes down by 30 times while allowing electric vehicles to charge 1,000 times faster than what's available today.

Professor William King, the man behind this research, claims this technology will be available for use in consumer electronics in as soon as two years.

While the future of battery technology is enough to excite any tech geek, as investors, it's merely something we have to monitor from a distance — while focusing on opportunities that are available to us today, not five to ten years from now.

Fortunately, when it comes to electric car battery technology, we don't have to wait very long to profit from the next big thing...

Though there are a number of new battery chemistries that'll be entering the market in another five to ten years, right now lithium-ion remains the chemistry of choice.

But thanks to a new development in supercapacitor technology, the next generation of electric cars could be equipped with graphene supercapacitors that'll allow you to charge an electric car in just minutes instead of hours.

My friends, that's the kind of game-changing technology that changes everything.

And thanks to graphene — the same material that's now being used to double the efficiencies of solar panels and make airplanes 70% lighter — electric cars are on the verge of offering the kind of power and range that is demanded by most Americans.

Yes, this completely changes the dynamic of electric cars.

So keep your eyes peeled for some good graphene plays in the future. Because it's ultimately going to be graphene — not lithium — that'll deliver the biggest profits in the electric vehicle space over the next few years.