Where will you fill up these fuel cell cars?

We already know nearly every carmaker out there is vying for a piece of the market Tesla kicked into high gear.

That's why so many new electric vehicle designs are slated to be on the market by 2020.

But that's not the only challenge Tesla is facing today...

Many of the carmakers currently working on their own EVs are also designing hydrogen fuel cells in an effort to come at the clean car problem from every possible angle.

These competitors include big names like GM, Honda, and Toyota, the last of which is also working on a fuel cell delivery truck to go head-to-head with Tesla’s truck design.

CEO Elon Musk summed it up pretty well when he said, “Hydrogen is an incredibly dumb [energy storage mechanism] to pick.”

This was back in 2015 at the Automotive World News Congress in Detroit, where he added, “I just think that they're extremely silly... it's just very difficult to make hydrogen and store it and use it in a car.”

Obvious biases aside, he does have a point.

Lithium batteries come in all shapes and sizes and can be made to accommodate different types of cars as needed.

Hydrogen batteries are a little trickier.

First and foremost, the batteries do not store energy — they store pressurized hydrogen gas, which is used to produce energy on the spot.

In fact, hydrogen already has a pretty explosive history in transportation... 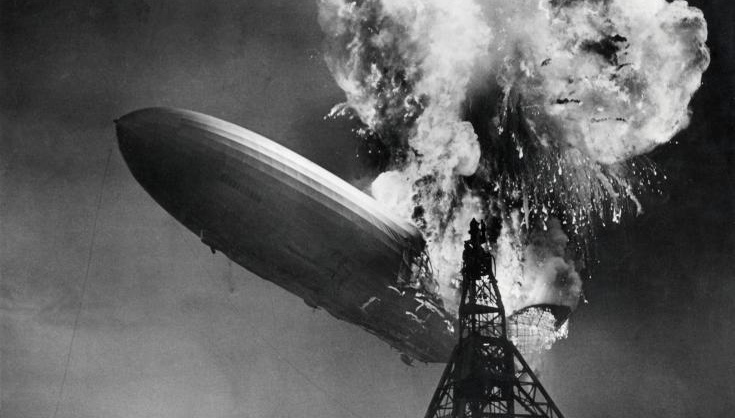 Obviously, modern fuel cells are a lot safer than hydrogen-filled blimps and have, in fact, been implemented successfully in a handful of vehicles already on the market.

They even have some significant benefits over lithium batteries!

For instance, fuel cell cars are not only 100% clean, but they also have consistently longer driving ranges.

The Honda Clarity, which is slated to be on the market by the end of this year, has the longest range of any emissions-free car with 366 EPA estimated miles per tank.

The Tesla Model S 100D trails behind with an average of 355 miles on a full charge.

And if you’re used to the quick stop at a gas station today, you won’t be disappointed by a hydrogen-fueled car, which can be filled in just a few minutes.

The average Tesla battery, however, can take hours to charge, even if you’re using one of the company’s high-powered Supercharging stations.

Despite these advantages, however, lithium is the one most carmakers have taken interest in.

In the U.S. alone, there are more than 16,280 electric vehicle charging stations located all across the country. Plus, if you’re willing to pay the bill, you can buy a wall charger for your home and plug your car in overnight.

But if you’re looking for a hydrogen fuel station, you may be out of luck.

There are a total of 40 in the entire country, and they’re only available to people in a select few states:

This scarcity in infrastructure means hydrogen fuel cells won’t be taking the market by storm until major investments are put into building a better network.

While there are some big names already working on a solution...

We’re keeping our focus squarely on the more immediate profits.

And so far, the metals powering the EV revolution haven’t missed a beat!

Lithium prices have been on the rise since 2011, reaching a new high of $9,100 per metric ton as of this year.

Of course, there’s also the new darling of the clean energy industry: cobalt.

This unique metal has an interesting history and hasn’t quite surpassed its previous high even though it’s sitting pretty at more than $59,000 per metric ton.

It’s not expected to stay that low for much longer...

You can find out exactly why cobalt is the best investment in transportation, energy, and more by clicking right here.