This is bullish, as it means options traders, the so-called “smart money,” are betting on higher oil prices into the fourth quarter. 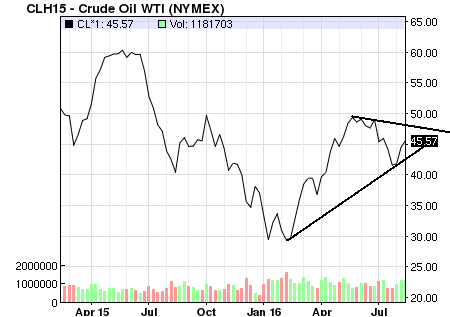 This is important because higher oil prices year-over-year will boost inflation gauges, impact the trade deficit, and have implications for certain sectors of the stock market.

But perhaps the most important impact will be sentiment. It could be that the downtrend will break if we hit $47 on WTI (see chart) and small-cap oil stocks will launch. But even if we get a sell-off to $44 or even $41.75, there will be no panic. The massive fear of oil price Armageddon is over.

Oil is perhaps the most cyclical sector. Boom follows bust like summer follows spring. I remember investing and winning big after the oil bust of 2002–2003. No one wanted to own oil companies then, but as has been proven time and time again, you make big money when you buy low. Range Resources Corp. (NYSE: RRC) went from $3 a share to $95, Petrobras (NYSE: PBR) went from $3 to $75, and ExxonMobil (NYSE: XOM) went from $20 a share to $100.

Here are the stages of the oil cycle:

Stage 1: This is where we are now at the bottom of the cycle. There is too much oil supply, which results in low oil prices. Low oil prices mean that investment in new projects withers. Prices are also low, which stimulates demand. It should be noted that big trucks are now selling like hotcakes. F-150s just hit a record for total sales and were up 9.6% over last year.

According to the EIA, we are just about to enter Stage 2: 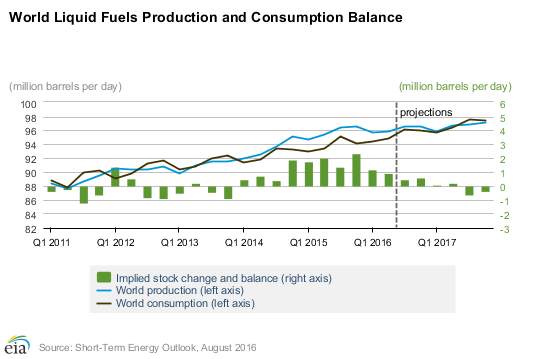 Stage 3: Rising oil prices mean oil companies start making money, and they ramp up investments in new projects. The higher prices rise and the longer they remain high, the greater the investments. New oil plays become economical, and new oil companies are formed. There is a huge multi-year lag time for stage three.

Stage 5: Prices collapse, and the oil industry contracts as capital expenditures are slashed. We return to Stage 1. The cycle is complete.

It is time to start putting your money in small-cap oil companies like Range Resources was in 2002 — it's a $6.5 billion company now — as it will be the little guys that return the most money when Stage 2 hits in earnest. Heck, XOM is down only 13% from its all-time high. It's not exactly a diamond in the rough.

To get complete articles and information, join our daily newsletter for FREE!
Plus receive our monthly free report, "Two Stocks to Play The Coming U.S. Oil Export Surge".

If you want a short-term tradable catalyst, look no further than the next OPEC meeting.

In an August 8 statement, the cartel said higher oil demand is expected in the third and fourth quarters. OPEC president and minister of energy and industry for Qatar H.E. Dr. Mohammed Bin Saleh Al-Sada said the recent decline in prices is temporary:

"These are more of an outcome resulting from weaker refinery margins, inventory overhang – particularly of product stocks, timing of Brexit and its impact on the financial futures markets, including that of oil." Increased crude oil demand in the third and fourth quarters, augmented by winter in the Northern Hemisphere, and a decrease in supply suggests prices will bounce in the second half of the year, he said.

Still, OPEC has scheduled a meeting September 26 through September 28 in Algeria during the 15th International Energy Forum, ostensibly to reconsider a production freeze.

Prediction: Oil prices rise into the late September OPEC meeting. This, in turn, will drive up prices of small-cap oil stocks. The subsequent sell-off will set a higher low for the uptrend started in January.

We are at the beginning stages of a new secular bull market in oil. I encourage you to find well-funded, solid resource oil companies. They are giving them away right now for pennies on the dollar. Here are three.