With third quarter numbers starting to surface this week, it's not too early to start thinking about next year. . .

And there's plenty to think about.

Stocks in general are sitting on 52-week highs, leaving even the most ardent bulls with a finger on the sell button, ready to take profits at the first sign of trouble.

The quarterly reports coming out over the next few weeks could be that sign, since this earnings season will still see a lot of purging — even with the recession waning.

If you know what's in store for the long term, any earnings-induced sell-off could present a monumental buying opportunity. Over the next few weeks, I'll examine a variety of energy sectors and give you my take on the 2010 picture.

Upon review, the second quarter wasn't at all bad for solar stocks.

But I'd be remiss if I didn't say there was a feeling of anxiety brewing. Some second-tier companies lowered gross margin outlook as a result of falling average selling prices (ASPs). Module prices fell ~9% in the quarter, ranging anywhere from $2.50-$3.00/W, and were expected to decline further in the second half of the year.

Further up the supply chain, prices were also falling for polysilicon, the industry's raw material. Prices have been reduced by more than half and are now hovering in the $50-$60 per kilogram range. Producers like MEMC (NYSE: WFR) need prices above ~$28 to turn any kind of profit.

So the pressure was mounting. And the strategy, by most accounts, was to increase volume to offset falling prices. Global stimulus packages were created to help do just that.

Upcoming earnings numbers will show whether or not that strategy worked.

There is certainly much to consider when looking at stocks with a 12-month lens. For some time now, I've been using a proprietary system to weigh some of those factors for me.

It's called the "R-Track," and it takes into consideration — among other things — the projected future earnings of related groups of stocks.

From what I can tell so far, there's a dark horse that could be best performer in 2010.

The company is Trina Solar (NYSE: TSL), and it's already shaken off the recession like nobody's business: 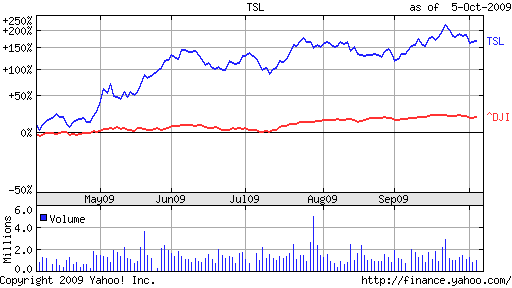 Upon beating earnings estimates in the second quarter, they confirmed third quarter guidance of 90-110 MW shipped, with a decline in ASP of 10-15% from $2.32/W in Q2.

What's more, the company reiterated full 2009 shipments of 350-400 MW, which would require significant growth in the fourth quarter. A 200-MW backlog should help out.

Trina is also lowering in-house costs, guiding to $0.80/W from $0.86/W at the same time polysilicon prices are falling. This will help keep the gross margin stable.

And surprising — even to me — is the fact that Trina has one of the best long-term revenue and earnings growth rates. In the second quarter, they earned twice as much as SunPower and 17 times more than Suntech.

Look for them to remain quietly dominant over the next year.

Another company I expect to do well is Canadian Solar (NASDAQ: CSIQ). They, too, have shown strength of late, outperforming more well-known domestic names.

Chinese solar suppliers in general have been steeling market share from European and American competitors.

The company reported higher-than-expected sales and margin after the second quarter, and actually increased its 2009 shipment guidance by more than a quarter. The company picked up 15 new customers earlier this year, and is increasing sales across Europe, Asia, and the U.S.

And like Trina, Canadian is rapidly reducing costs. In fact, they're already beating Trina with a $0.60/W processing cost, brought on by its ramp of internal wafer capacity.

If the past six months are any indication, Trina and Canadian could outperform their peers over the next year: 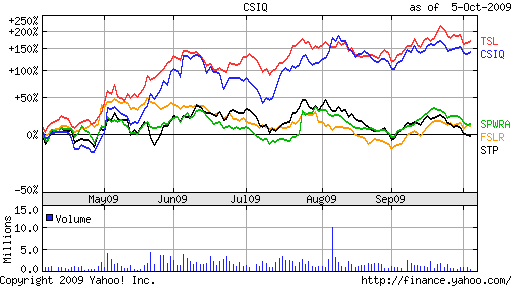 While Trina and Canadian Solar have the potential to outperform next year, there are plenty of other solar stocks from which to profit.

The two I chose to highlight have great fundamental pictures. But getting cozy with the entire sector is a sure path to frequent profits.

For example, I've used my "R-Track" system to close 17 winning solar stocks so far in 2009. I closed Canadian Solar for 20% and I'm up about the same in Trina.

But I've also played several other solar stocks for profit — from both China and the U.S. — by using data compiled from my "R-Track."

I want you to invest in cleantech stocks with the same frequency and precision.

To that end, I've prepared a full report that describes the system I've designed, and how you can use it close winner after winner in the clean energy sector.

Taking advantage of the "R-Track" system today is the only way to get constant profits from the renewable energy boom that is fully underway.

P.S. I know the information needed to consistently trade winning energy stocks can be confusing. EPS, ASPs, gross margins, megawatts shipped, peer pricing. . . it can all be a bit overwhelming. The "R-Track" system I've devised takes all the guesswork and uncertainty out of energy investing, giving you the power to buy and sell winning stocks at will. Make sure you read about this new way of investing before you buy another energy stock