Solar Investing in the Age of Trump

The One Energy Investment You Can Always Count On

The rabbit tracks that once carved schizophrenic paths across the backyard have disappeared, and the fresh mud is now exposing all that was left in the wake of what was actually a pretty mild winter.

I found this little surprise while out in the sugarbush... 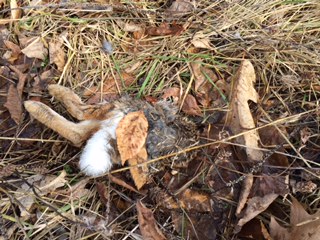 Although it looks like this little guy came up on the losing end of a National Geographic documentary, with mud season comes the excitement of spring.

The brassicas in the greenhouse are coming up strong, the hoop house is seeded with greens, and new construction projects are being readied with anticipation.

One of those projects this year is a second ground-mounted solar array that, when completed, will cut another 15% off the power bills. This is in addition to the 10% price cut we realized after the first array was installed three years ago.

Although a 25% energy cost reduction might not seem like much for a single home, in terms of an operating farm, a 25% decrease in energy costs is a very big deal. In some cases, it could mean the difference between making a profit and going out of business. So it’s no surprise that we’re starting to see more and more farms utilize solar in an effort to reduce operational costs and, in some cases, generate revenue by selling excess power back to the utility.

I actually spoke with our solar developer last weekend, and we were talking about how much solar has really helped small farmers in the region. I also asked him if he thought new policies in Washington might hurt the solar industry this year, as so many folks have claimed.

He laughed and told me that if the industry was going to get hurt, he knew nothing about it, as he’s been on a hiring spree over the past few weeks, trying to find enough talent to help him meet a huge backlog of projects for the summer.

There seems to be this misconception that because President Trump wants to roll back climate regulations and regulatory hurdles for fossil fuel producers, somehow the solar industry is going to go gently into that good night.

Nothing could be further from the truth.

In fact, if you look at the draft of Trump’s recent executive order to dismantle climate policies, you’ll actually find that solar is not being singled out as a target for termination. In fact, according to Bloomberg, the draft notes that the U.S. is well served when affordable, reliable, and clean electricity is produced from an array of sources, including solar and wind.

Certainly this is the case for so many farmers who have been able to utilize solar power in an effort to stay competitive. And it’s also the case for some of the country’s biggest and most successful companies.

Consider Target Corporation, for instance. Target currently has 147.5 megawatts installed on the roofs of its stores. To put that in perspective, that’s enough to power more than 24,000 homes.

And Target is just one of many huge corporations now employing solar in an effort to decrease energy costs. Other major players include:

Of course, these are just 10 companies that are actively installing solar.

Looking at the big picture, last year, just in terms of solar PV alone (not including those massive solar thermal plants), the U.S. added one new megawatt of solar every 36 minutes.

There was so much solar installed last year that it was the number one source of new electric generating capacity additions, beating out natural gas and wind. Check it out... 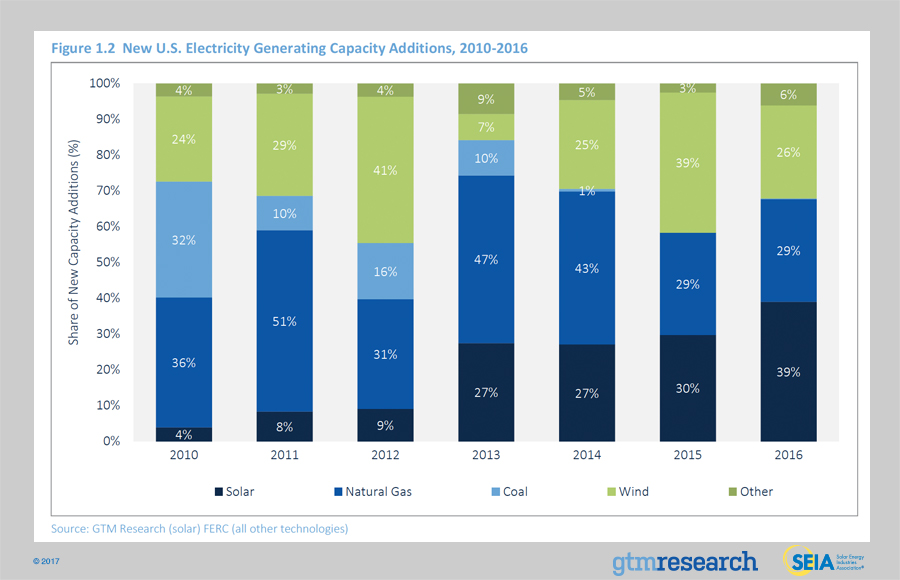 But here’s the most important part...

That’s far more than the 187,117 Americans who are currently employed at coal, oil, and natural gas power plants.

Although some maintain that Trump is anti-renewable energy, one thing he isn’t is anti-jobs.

The bottom line is that Donald Trump — no matter what he tweets — isn’t going to push any agenda that’s going to cost jobs. To do so would destroy any chance he has at re-election. This is exactly the reason Trump isn't going to crack down on the legal cannabis industry, too. Too many jobs. (You can read more about that here.)

So yes, the EPA is going to get gutted, and climate change initiatives are going to get trounced. But this does not change the fact that the solar industry is one of the fastest-growing industries in the U.S. And with that growth comes continued job creation.

Make no mistake: while there are plenty of opportunities for energy investors in various industries, one opportunity you can bank on is that which will be spawned from the continued growth of the U.S. solar market.

What Trump's 2018 Budget Means for Renewable Energy
Trump’s 2018 budget proposal is out. And it does not paint a pretty picture for certain industries, especially energy.
Donald Trump’s Advisors Are Major Clean Energy Investors
Nearly every company represented on Trump’s business advisory council is investing heavily in renewable energy. Here's why...
How Bo Copley Can Bring Jobs Back to West Virginia
West Virginia could revitalize its economy if it would just stop relying on the coal industry to save it.
Hydrogen Fuel Cells: The Downfall of Tesla?
Lithium has been the front-runner in the battery technology market for years, but that is all coming to an end. Elon Musk is against them, but Jeff Bezos is investing heavily in them. Hydrogen Fuel Cells will turn the battery market upside down and we've discovered the tiny company that is going to make it happen.