Take a look at the picture below. 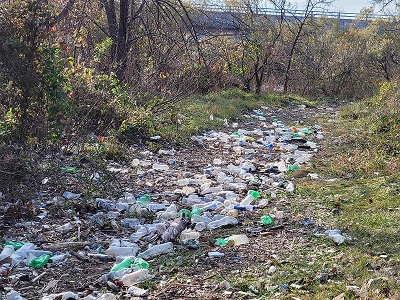 You would think this scene is from a third-world country — but it’s right here in the great United States of America. This picture was taken yesterday, just a stone's throw away from where I caught my first Baltimore Inner Harbor catfish.

Needless to say, this scene is becoming all too common here in Maryland as well as in many other states in the U.S.

Considering there are hundreds of places in Baltimore where plastics are piling up like this and thousands of towns and cities nationwide facing the same widespread trash problem, I’d say we are losing the fight against plastic pollution.

The Situation Is Dire

A World Wildlife Fund survey found that 86% of Americans believe we need a transformative new approach to deal with our plastic waste.

Despite this, according to a study featured in Science Advances, the U.S. generates the most plastic waste of any country and is the world’s third-largest contributor to the global plastic pollution problem in coastal environments.

So while I like to think the glass is half full, I’m calling bunk on our “greenness.”

We Americans may talk the good talk, but when it comes down to it, each and every one of us is still using over 231 pounds of plastic each year.

Think about that the next time you pop a single-use coffee pod into your new Keurig.

And since I doubt even the wokest of Americans can do enough to make an impact on the amount of plastics used, we need to turn to other solutions.

The good news is I think we have an incredible one on hand.

Have You Heard of These New “Bioplastics”?

According to ScienceDirect, polyhydroxyalkanoates, or PHAs, "are a class of biodegradable, biocompatible plastics comprising of polyesters of R-hydroxyalkanoic acids."

PHAs have a lot of promise as a solution to the growing plastic problem. Not only do PHAs occur in nature but bacteria use them to store energy when they lack enough nutrients to reproduce. Perhaps most importantly, PHAs will biodegrade in ambient environments, such as in the soil and even in the ocean.

Many of the applications that companies have in mind for these PHAs are for single-use plastic products like food packaging, bottles, straws, and cutlery. Industry reports also note a huge future demand for PHA plastics. A report by Chemical & Engineering News notes one PHA plastics company “puts the addressable PHA market at 230 million metric tons per year — more than half the world’s plastic demand.”

Even more exciting is the fact that there are now ways you can invest in this revolutionary new technology that could finally eradicate scenes like the one I showed you above.

Unbeknownst to many, there’s a sub-$100 million company that is tackling the problem head-on. In fact, PHAs are literally its entire business model.

That makes this a pure play in one of today's most in-demand sectors.

Because let's face it: We as a consumer culture are not going to stop using single-use products like disposable forks, plates, cups, and bottles.