Shale Technology: Why Tech Will Save Our Oil Boom

Back in 2008, hardly anyone had heard of the now-famous Bakken Shale in North Dakota.

When the USGS released its assessment that year, reporting that North Dakota and Montana's Bakken formation held 3 to 4.3 billion barrels of technically recoverable oil — roughly 25 times more than its previous estimate in 1995 — it was only a matter of time before the play became the darling of the U.S. oil industry.

It was as if a sudden massive oil discovery took place at the time, with investors suddenly realizing the kind of value the play truly held.

But the truth is that we already knew there were billions of barrels up for grabs in the Williston Basin... and we've known it for quite some time.

The discovery of oil in North Dakota actually took place 62 years ago!

A year ago, I talked a little bit about the first exploratory well drilled by Amerada Petroleum Corp. on Clarence Iverson's farm in Tioga, North Dakota. It soon became the first commercial oil well in the state.

Unfortunately, the oil locked in the Bakken couldn't be extracted using conventional means, and companies all but wrote off the formation, only attempting to extract oil there as a last measure.

Oh, how the times have changed... Things really started taking off after the USGS assessment I just mentioned.

And like I said above, we already knew these tight oil formations held a jaw-dropping amount of oil-in-place.

The only issue was how to effectively extract it.

Look, my readers and I have had a front-row seat to the first stage of the United States' tight oil boom. Now it's time to double down on what's going to drive this boom forward.

Things were much different in the early days of the shale boom, just as Harold Hamm and friends were still making a name for themselves in the Bakken.

And for the last few years, I've been telling readers time and again that the next stage of the shale boom won't come from a massive discovery.

It's technology that will drive us forward.

And since 2008, that's precisely what has happened.

In fact, U.S. drillers are getting better at tapping our tight oil resources with each new well they drill!

Don't believe me? Well then, we can just let the numbers do the talking...

Why Technology Will Save the Energy Sector

Last week, I noted how the average production per shale well in four key fields has increased considerably over the last eight years.

So if the combination of horizontal drilling and hydraulic fracturing was what kick-started the tight oil boom, what's next?

When it comes to developing these tight oil resources, our biggest concerns are both the time and money it takes to drill and complete these wells. One of the first advancements we've seen was a move towards pad drilling, which allowed companies to drill multiple wells on a single location. The company simply had to disassemble the rig, move it over the new spot, and then rinse and repeat.

And now, these operators are taking it a step further...

One of the next game-changers that immediately come to mind is “walking rigs,” which I believe will soon become a common sight on these fields. Here's a quick video from Patterson-UTI Energy (NASDAQ: PTEN) that explains this new technological advancement.

The differences between the new rigs being deployed today and the first-generation rigs is staggering. Below, you can see just how efficient the new rigs have become since 2011: 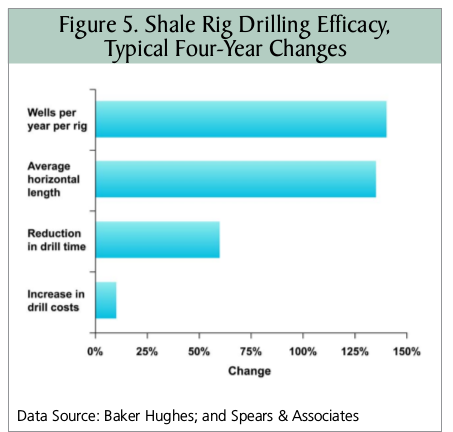 Ever wonder why the rig count has dropped precipitously since the summer of 2014, yet production continued to climb? The simple answer is that the rig count is quickly becoming disconnected from the total amount of feet drilled by oil wells. 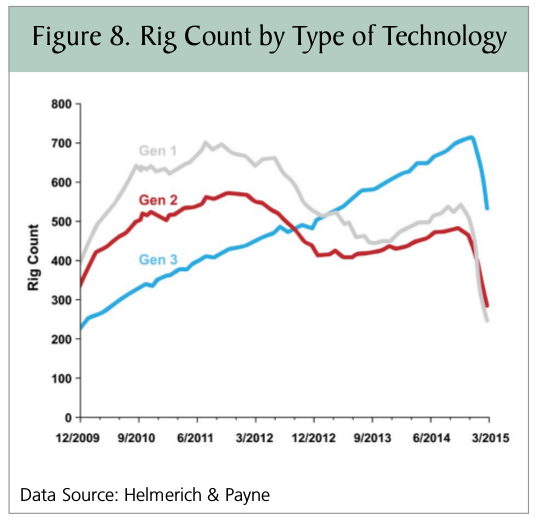 Over the last six years, the number of “Generation 3” rigs in the field jumped by 60%, each one far more efficient than its predecessor.

That, dear reader, is why investors still have faith in the most prominent tight oil plays.