And that's OK. But you should know anyone with a dime invested in the U.S. oil industry today owes a huge debt to this man...

He was first hired by the U.S. Geological Survey back in the late 1940s. About twenty years later, Marvin was working for Atlantic Refining Company and had moved to Alaska, where he helped map out Alaska's North Slope.

After his company merged with another to form the Atlantic Richfield Company in 1966, it was Marvin who was able to persuade the new oil execs to start drilling wells at Prudhoe Bay.

If you didn't recognize Marvin's name, I'll bet that you've at least heard of the Prudhoe Bay oil field before: Not only is Prudhoe Bay the largest field in North America; it's also in the top 20 worldwide.

In fact, the 25 billion barrels of recoverable oil there is double that of the our largest onshore field, which is located in East Texas.

As soon as the 800-mile Trans-Alaska Pipeline system was built in 1977, crude began flowing from Prudhoe Bay to the Valdez Marine Terminal in the northeast corner of Prince William Sound. By November of 1987, production from Alaska's North Slope topped two million barrels per day.

If it wasn't for the discovery of Prudhoe Bay, U.S. oil production would have continued to decline.

Our domestic oil production jumped by half a million barrels per day the year after commercial production began in the North Slope: 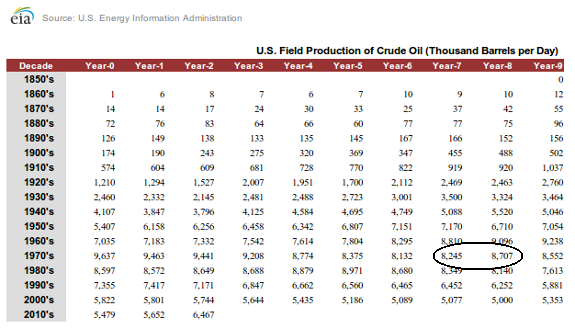 Unfortunately, output from the North Slope, which accounts for 97% of the Alaska's total supply, peaked in 1988.

Once that occurred, U.S. production continued its long-term decline — until the trend reversed after the arrival of shale plays in 2008. Take a second look at that chart and you'll see that 2009 was the first year-over-year increase since 1991.

From Prudhoe Bay to Bakken Shale

Marvin's legacy in our latest oil boom is largely forgotten. Had it not been for his discovery and subsequent role in the development of Prudhoe Bay, we wouldn't be enjoying the current production growth we're experiencing in the unconventional oil and gas plays dotting the U.S. landscape...

One of the first companies to drill exploratory wells in Prudhoe Bay was Nabors Industries. By 1975, the company was pioneering a new drilling technology called pad drilling.

For those of you unfamiliar with the practice, pad drilling involves several wells being drilled from the same pad. In Prudhoe Bay, for instance, up to 30 producing wells were drilled on a single pad.

With the arguable exception of the combination of horizontal drilling and hydraulic fracturing used in fossil fuel production, pad drilling will be pronounced the single-most influential technology employed in unlocking our shale formations.

This technology isn't suddenly emerging from within the oil industry; it's a proven, time-tested drilling strategy companies are utilizing to get the best bang for their buck in shale plays.

Today an increasing number of companies are transitioning to pad drilling — creating a list of blockbuster shale producers.

In ten years' time, the move to pad drilling will stand out as the most profitable chapter for companies and individual investors alike.

Since 2008, companies have been mapping out the biggest unconventional plays in Canada and the United States. Most of the time, this involved drilling a single well on a pad...

Now they can revisit these sites and drill multiple wells.

If you've ever wondered how the Bakken production will surge past one million barrels per day... well, this is it.

The potential alone here is insane.

In less than a decade, this method will become the standard, go-to strategy to develop an area.

Of course, this technique comes with a multitude of benefits — the biggest, and perhaps most ground-breaking, of which is efficiency. Pad drilling will drastically cut the time it takes moving rigs from one well to another. Other benefits include less disturbance on the surface and reduced drilling costs, just to name a few.

We all know what happens when you catch the right investment at the right time...

This technology offers the easiest way you'll bank 550% gains in the shortest amount of time.