Unavoidable Crisis about to Strike Riyadh

There's a crisis on the horizon.

For some, it's too much doom and gloom to have with their morning coffee. Others either don't see it coming or are in denial.

Quite frankly, we don't see how anyone doesn't see this looming crisis...

The problem stems from a crucial event in the United States over forty years ago in 1970  — the year we became a net importer of oil.

It wasn't due to some evil conspiracy by Big Oil, and it certainly wasn't a fluke.

Simply put, our crude oil production topped out at slightly over ten million barrels per day back in November 1970.

Eventually, all oil exporters will have to come to grips with this problem — and it'll come with a severe penalty for some.

We've talked before about how this crisis is affecting Mexico. Ever since the Cantarell oil field peaked, the world has been watching the clock for panic to strike. As you know, roughly 40% of the government's budget is dependent on oil revenues.

And Mexico's not the only country relying heavily on oil and gas for revenue...

Russia, the largest oil and gas producer in the world, depends on these exports for 50% of their budget.

And in both Iran and Venezuela, fossil fuel exports account for about 60%.

But as Brianna Panzica pointed out this past weekend, there's one country these others don't hold a candle to...

The problem has never been that the Saudis are running out of oil.

We all know they have enough crude in the ground to last a good long while: 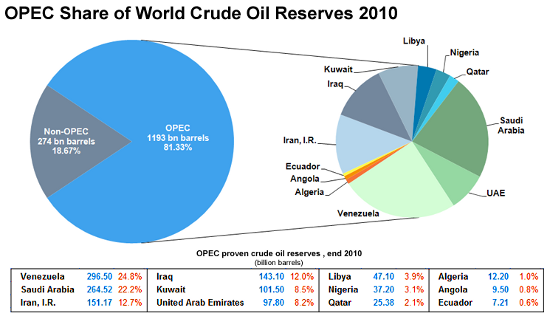 But the rising domestic consumption for top OPEC producers is throwing a wrench in the works...

Imagine the outrage from the Saudi populace when they have to pay more than a buck per gallon. There'll be riots on the streets of Riyadh.

In fact I would bet they're more concerned about it than anyone else on the planet.

And considering how closely-guarded OPEC data is today, I doubt the outside world will ever know the truth about their oil fields.

That said, the Saudis will try anything to curb their own demand, something they've had great success with thus far.

The Saudis' increasing consumption is leading them down the familiar road of alternative energy.

Saudi Arabia plans to have up to 16 reactors operating within the next fifteen years, adding 17,000 MWe of power generation to the mix. With an average cost of $7 billion per reactor, Saudi Arabia's nuclear dream comes with a price tag over $100 billion.

According to the numbers at the World Nuclear Association, there are only three other countries in the world with more proposed nuclear reactors: Russia, India, and China.

The Saudis are also hoping to tack on an additional 25,000 MWe from wind.

But it's their solar ambitions that investors can really take advantage of over the next decade...

The Saudis plan to invest $109 billion in solar electricity during the next twenty years, adding 41,000 MW of solar capacity.

Twenty years from now, having access to cheap energy will be a luxury few countries will boast.

And that's why the real value here will come from technology that can dramatically cut costs.

Why is this so valuable to the Saudis?

If successful, their $109 billion solar investment will free up half a million barrels of oil per day for export.

That's enough to have the Saudis clamoring for more solar — and willing to pay anything for better technology.