Saudi Arabia, Pakistan and China: The Axis of Pain

Wealth, Power, and Prosperity is Moving from Us to Them

"... higher than mountains, deeper than oceans, stronger than steel and sweeter than honey"

On Tuesday, the United States demanded that Pakistan stop sending terrorists to attack U.S. soldiers in Afghanistan, or we would think about not paying the $4.5 billion in military funding we give them every year.

The Pakistan-based Haqqani network recently attacked the U.S. Embassy in Afghanistan. This fighting force has links to the Pakistani intelligence agency.

Of course, the United States has been bombing the Haqqani in Pakistan for five years using drones...

Mullen simply stated what everyone in the theater of war has known for years: Pakistan's military is supporting the Taliban and Al Qaeda. This caused riots in the streets of Islamabad and a cosmic freak-out by Pakistani leadership.

But these macro political shifts matter — and what we have now is a regrouping of international alliances that could have a very real effect on the price of oil.

Pakistan and India can't get along, have fought several wars, have disputed territory, and are both in possession of nuclear weapons.

China and India are in the same boat.

Pakistan also has close ties to Saudi Arabia. The Saudis promised them 50,000 barrels of free oil a day after their nuclear bomb test in order to cope with sanctions; Pakistan and Saudi Arabia were the only two countries to recognize the Taliban as legitimate rulers of Afghanistan...

All of this matters because the mission creep is getting out of hand.

For some reason, Bush, Rumsfeld and the rest of the neocons — in a fit of mad hubris — decided a long time ago that they would "fix" the Middle East and install democracy from Tripoli to Islamabad.

Here is a map of U.S. military bases: 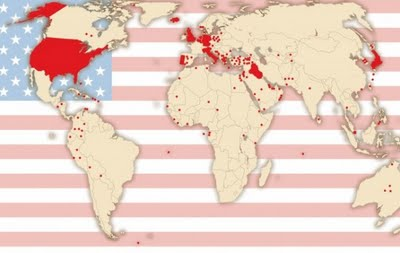 The sun never sets on the U.S. Empire, and it is expanding constantly.

Uncle Sam is now using killer drones in Libya, Somalia, and Yemen. Now it seems Pakistan is in the hot seat.

To cover itself, Pakistan is courting all the allies it can find — which include Saudi Arabia and China.

Yesterday, Iran announced it would send its Interior Minister to Pakistan next week.

There is a planed pipeline between the two countries called the Peace Pipeline that would go through Pakistan and into India. Pakistan is facing a severe energy crisis and needs oil from its traditional supplier, Iran.

The U.S./U.N. has imposed sanctions on Iranian exports in an effort to stop the country from getting a nuclear bomb. This is because Iranian President Ahmadinejad occasionally threatens to blow Israel off the planet.

You can't be a U.S. president unless you win New York and Florida — and you can't win those states unless you support Israel...

It's all very complex and muddled in a very muddled and complex part of the world.

Pakistan is supporting China by saying it will go in and kill Uighur militants that are causing trouble in the western part of the country. "China's enemy is Islamabad's enemy," Interior Minister Rehman Malik told visiting Chinese Vice-Prime Minister Meng Jianzhu on Tuesday. They are also holding war games with Saudi Arabia.

At the base of all of this is a Malthusian struggle for oil. 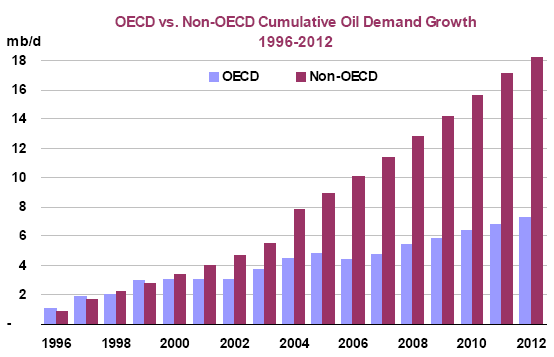 Thomas Malthus was an English scholar who authored An Essay on the Principle of Population, first published in 1798.

He argued that populations overproduce until they get checked by famine, disease, or war...

Must it not then be acknowledged by an attentive examiner of the histories of mankind, that in every age and in every State in which man has existed, or does now exist,

That the increase of population is necessarily limited by the means of subsistence,

That population does invariably increase when the means of subsistence increase. And,

That the superior power of population is repressed, and the actual population kept equal to the means of subsistence, by misery and vice.

There are now seven billion people on the planet. China, India, and Pakistan — as well as the rest of the emerging markets — would like to drive cars and own air conditioners just like the rest of us...

As you can tell by the chart above, they would like more oil.

Saudi Arabia is also selling more to India. Saudi crude exports to the Subcontinent grew sevenfold between 2000 and 2008, and the Kingdom now provides about a quarter of India’s oil.

But there are problems: Saudi Arabia is running out of oil to sell.

The country charges 12 cents a liter for its gasoline for its natives. This price fixing has led to massive waste.

The Empire in Decline

The United States will leave Iraq by the end of this year, and U.S. troops are scheduled to leave Afghanistan by September 2012.

The diplomatic power will continue to shift away from the U.S. and toward China, India, and other emerging markets... and the oil will follow.

Hess Corp CEO John Hess recently said, "Without greater investment to keep production capacity rising in line with demand, oil prices will again move towards new records. An energy crisis is on its way, and is likely to be triggered by oil."

Recent fears of a global slowdown in GDP have sent West Texas Crude down to $80. Oil exploration companies are highly leveraged to the price of oil and have subsequently gotten crushed.

There are now incredible values to be found in the wildcatters...

Oil demand will continue to expand beyond the ability of producers to keep up.