Last week I predicted that oil was going to $75 over the next two quarters. Today, analysts are on TV talking about Brent at $60 this week!

As I write this, oil is at a 17-month high. What a difference a few months makes. It was not that long ago when pundits were declaring an end to the hydrocarbon economy and saying that oil had found a permanent low price.

But remember, 99 times out of 100, the “this time it's different” paradigm is wrong. Oil is cyclical. It moves up and down. It has for 100 years. You buy low and sell high.

Today's price jump of over 4% was driven by the Saudi Arabian oil minister who said the Kingdom would be cutting even more than it had committed to on November 30.

The persuasive potentate said that Saudi Arabia would cut below the 10-million-bpd mark — a promise that, if fulfilled, would give rival Iran even more market share.

Traders love fast talk by the Saudis. They push the price up and take their winnings regardless of the facts on the ground.

Historically, OPEC and the Russians cheat. And they cheat a lot — up to 35–40% — and everyone knows it.

Furthermore, the cuts will start on January 1 and end in only six months. That is hardly a sea change. In the long run, OPEC produces 40% of the global oil and 60% of that which is traded internationally, which falls short of a monopoly.

Meanwhile, U.S. production and exports are climbing again. Rig counts are up. New wells are being pumped. If you want to buy into the new oil bull market, look to American-based/non-OPEC companies.

The situation in Standing Rock, where Energy Transfer Partners (NYSE: ETP) lost its rights to finish its pipeline, looks like a great entry point to buy some high-yield pipeline stocks. Most of these stocks have sold off after Obama arbitrarily took away ETP's property rights. This will surely be reversed by Trump.

To switch gears a second, I'd like to point out that the market is on the high side after eight years of a bull market. We are now sitting on the longest bull market in history. Small caps, financial, industrial, commodity, and consumer discretionary stocks have done best recently.

Here is the Shiller P/E index, which is in vogue among financial writers at the moment. 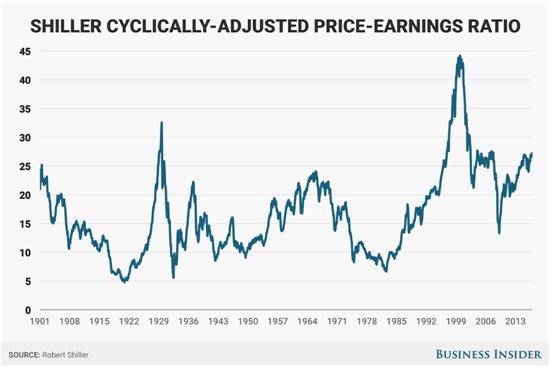 When it gets this high, Shiller tells us that the 10-year average is below what you'd get in bonds. That is true, but it leaves a lot of money on the table.

I'm sure you remember the 1999 bubble and the 2007 bubble. In 1999, every restaurant had CNBC on the television during lunch, not ESPN. You knew idiots out of college making huge signing bonuses at places like pets.com. I knew a guy who became a multimillionaire at AOL. His job was policing chat rooms. Another guy worked in a mailroom and drove a new Mercedes, because the high-flying company he worked for gave you $5,000 for each new hire you brought to the company. He brought in everyone he knew.

In 2007, the bubble was housing. I knew a young lady who, despite all evidence to the contrary, thought she deserved a much better house than the modern one she had bought just two years before. She got a bridge loan, carried two houses, and went bankrupt when the crash hit. Real estate was all anyone talked about at cocktail parties.

This begs the question, what is the fad now? Where are foolish millionaires being printed? Where is the proverbial taxi driver giving stock tips? Or the gardener flipping houses? I could be wrong, but I don't see them.

The Shiller index says the market could be cut in half. It also says it could double. Who's to say it won't hit an all-time high after the millennials get suckered in? In today's manipulated and Fed-driven investment world, you have to ride the bubbles because that is where the money is.