It wasn't his politics, disdain for all things American, or even his laughable stance on stricter enforcement of OPEC production quotas, designed to push crude oil prices well beyond the $100/barrel benchmark (laughable because breaking quotas is OPEC's worst-kept secret)...

None of these things compare to the utter failure of his country's oil industry.

And in that respect, Hugo Chavez has nobody to blame but himself.

Now, I'll admit the man had a set of brass cojones, infuriating every foreign oil company in Venezuela in one fell swoop. He simply snapped his fingers and snatched up their rigs, trucks, and every other piece of equipment tied to oil production.

Love him or hate him, Chavez's passing might be just the thing Venezuela's oil industry needs to get back on track.

And the greed he was famous for during his lifetime could make you a fortune going forward.

Chavez's first term started out rather ominously. The year he took office marked the first year-over-year decline in Venezuela's oil production in a decade.

By 2001 he had gotten oil production back on track, boosting daily output to almost 3.4 million barrels...

Then came the Hydrocarbons Law, which began Chavez's move to nationalize Venezuela's oil industry. But this law might not have had the desired effect, as production declined to about 2.8 million barrels per day the year after it was passed.

No matter what Hugo tried, an irreversible long-term decline appeared to take hold the country's production: 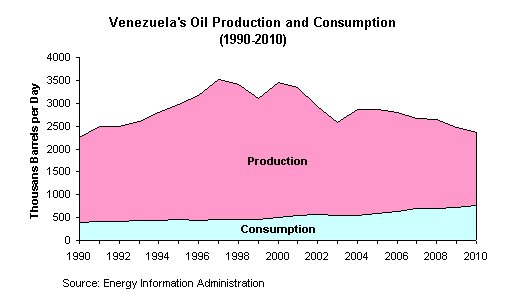 It's important to realize Venezuela's production woes weren't from a lack of oil.

And Chavez never failed to boast about the country's proven reserves of 296 billion barrels, roughly one-quarter of OPEC's total. (Of course, the extra-heavy oil in the Orinoco Belt isn't nearly as desirable as the light, sweet crude flowing out of North Dakota, but it's still a considerable amount. That poorer quality oil makes up 80% of the country's reserves and comes with an added cost to refiners.)

The decline in output was the result of several factors — including an open hostility to the foreign companies actively developing the country's oil resources. When Chavez officially nationalized the oil industry in May of 2007, hope for higher production was lost and things took a turn for the worst.

It's like watching a boat slowly sink. But instead of bailing out water, the captain is poking holes in the hull...

After ousting over sixty companies and declaring victory for the people of Venezuela, the lack of reinvestment in the country's oil industry is reaching crisis levels: The EIA reported Venezuela needs to spend $3 billion just to keep production steady.

And should we consider it a victory when rolling blackouts are commonplace?

As for the companies that were kicked to the curb, I have a feeling they'll do just fine elsewhere.

The bitter court battle that followed Chavez's May Day takeover didn't sit well with ExxonMobil Executive Rex Tillerson. But fear not, because he's about to have his revenge...

When the company announced it was spending $190 billion over the next five years, an interesting detail was where they're directing the capital. Out of 28 oil projects the company will start during that time frame, two dozen deal with heavy oil.

It's a good bet not a drop of it will come from Venezuelan fields.

Herein lies our opportunity, and I guarantee you most investors won't see it coming...

Battle for the Gulf

We've always known what the late Venezuelan president never said: The country needs us much more than we need them.

About 40% of Venezuela's oil exports are shipped to the United States. Take it a step further, and you'll notice these barrels are heading for refineries along the Gulf Coast that are specifically designed to handle heavy crude.

Nearly half of all our oil imports are shipped to the Gulf Coast area (PADD 3). Our PADD 3 area will become a battleground for heavy oil producers (and there are more of them than you might think).

Refiners like Valero, meanwhile, have performed admirably for investors over the past year: 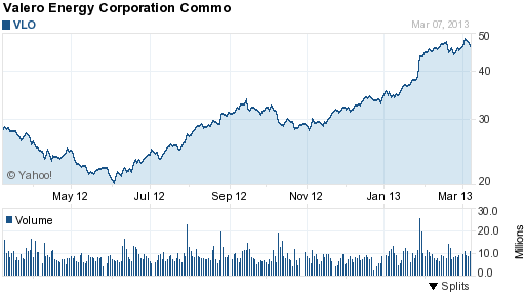 The heavy oil showdown in the Gulf will come down to Canada and Venezuela.

Both are developing their own massive heavy oil deposits, and although our initial reaction is to side with our Canadian friends, Chavez's death could breathe new life into Venezuela's dying oil industry.

Next month's election for Hugo's successor will be the first clear indication of whether that will happen...

If the current vice president fails to win, it'll be interesting to see if the country will become more market-friendly and open its doors once again for foreign investment.