But it's still high. As we've been hearing repeatedly in the last few weeks leading up to the election, unemployment is still a major domestic issue.

Bismarck, North Dakota has an unemployment rate of 2.5%. And in Williston, North Dakota, the rate is under 1%.

It's the shale boom that's allowed rates to stay so low in these areas. Williston is the epicenter for fracking in the Bakken shale. Midland is in an Eagle Ford shale hotspot.

The benefit that this boom has brought to the economies of these states is far from its peak; in fact, according to a report released this week by IHS, it's only just begun.

Right now, oil and gas is the largest single industry for employment, accounting for 8% of total U.S. employment, as you can see from the chart: 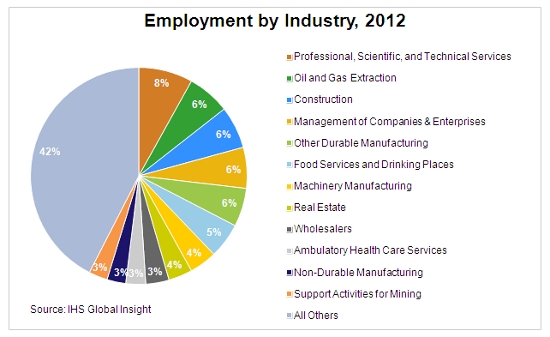 The domestic shale boom is far from its height, however. Employment in the industry is only expected to grow as new deposits like the Utica shale enter development.

The report examines the future of job production and economic expansion as a result of drilling in shale-heavy regions like Texas and North Dakota. According to the findings, unconventional oil and natural gas drilling will directly or indirectly create or sustain 1.7 million jobs this year.

Now, these aren't all drilling jobs. The report uses the 2020 figure of 3 million as an example, stating that roughly 600,000 of those jobs will be directly related to oil and gas, 900,000 will be related indirectly, and 1.5 million will be created or sustained as a result of the spending by these first two categories.

It won't come without a financial toll. Estimated capital spending between 2012 and 2035 is roughly $5.1 trillion on unconventional resources, and this is largely due to the high cost of an unconventional well.

Conventional wells are much cheaper, costing roughly between $500,000 and $1 million per well versus the unconventional cost range of $3 million to $10 million.

But the gain will also be great. In addition to the jobs, tax receipts from unconventional oil and gas projects will be $62 billion this year, $111 billion by 2020, and over all 23 years from now until 2035, tax receipts will be $2.5 trillion.

Employees can also expect higher pay. The average hourly wage for the economy as a whole is $23.07 an hour. But a worker employed by the unconventional oil and gas industry can expect, on average, $35.15 an hour this year.

Drilling activity in these areas will also add an annual $475 billion to the GDP by 2035, already expected to add about $237 billion this year.

Oil and natural gas from conventional plays are currently responsible for most of domestic production. But the IHS report estimates that unconventional sources will outpace them as soon as 2015: 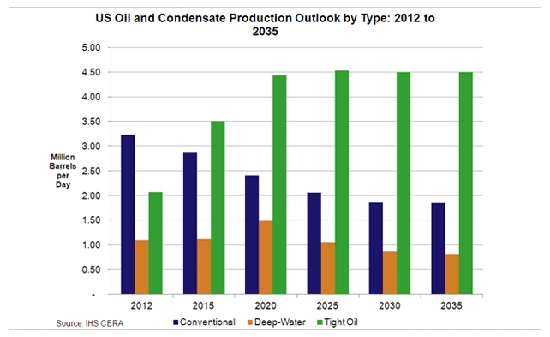 The Utica shale deposit is still young, with drilling in the early stages. The Marcellus shale is mainly producing in Pennsylvania, with the debate on fracking still barring production in New York state.

Should New York open up to the process, however, a whole new area will be available for wells and jobs.

The Utica shale reserve estimates are still not clear, and may not be for some time. But once numbers do come in from the Ohio deposit, that frontier will add to the profit as well.

“The growth of unconventional oil and gas production is creating a new energy reality for the United States,” said Daniel Yergin, IHS vice chairman and author of The Quest. “That growth has not only contributed to U.S. energy security but is a significant source of new jobs and economic activity at a time when the economy is a top priority.”

Both presidential candidates have put an emphasis on domestic energy when discussing energy policies. And though one has played up a support of renewables and the other has championed coal and offshore drilling, neither has failed to note the importance of the shale boom occurring in the U.S. and what that means for jobs, the economy, and the future of domestic energy.