No sooner were we taken out of the Paris Agreement than individual states began making big moves of their own, all focused on the development of renewable energy.

Most notable is California, a U.S. leader in clean energy production.

California Governor Jerry Brown met face to face with Chinese President Xi Jinping, both of whom signed an informal agreement to work together on emissions reduction strategies.

I can only hope those don’t focus solely on renewables.

To be fair, solar and wind are climbing their way to the top of the U.S. energy mix and boosting energy storage stocks through the roof on their way up…

But there’s one other fuel source that often gets ignored in these talks, even though it’s already taken the top spot all over the world.

It’s very easy, when reading about all the wonderful ways we’re improving solar panels and wind turbines these days, to forget that we’re still running mostly on fossil fuels.

Lucky for the environmentally conscious among us, coal is facing a slow and steady death spiral.

In its place, we’re picking up more and more natural gas.

The U.S. is actually the world’s biggest natural gas consumer. The country used around 27.5 trillion cubic feet of natural gas in 2016, more than the next three next biggest consumers combined!

And that may be a new peak, but it most certainly isn’t the most we’ll ever use. 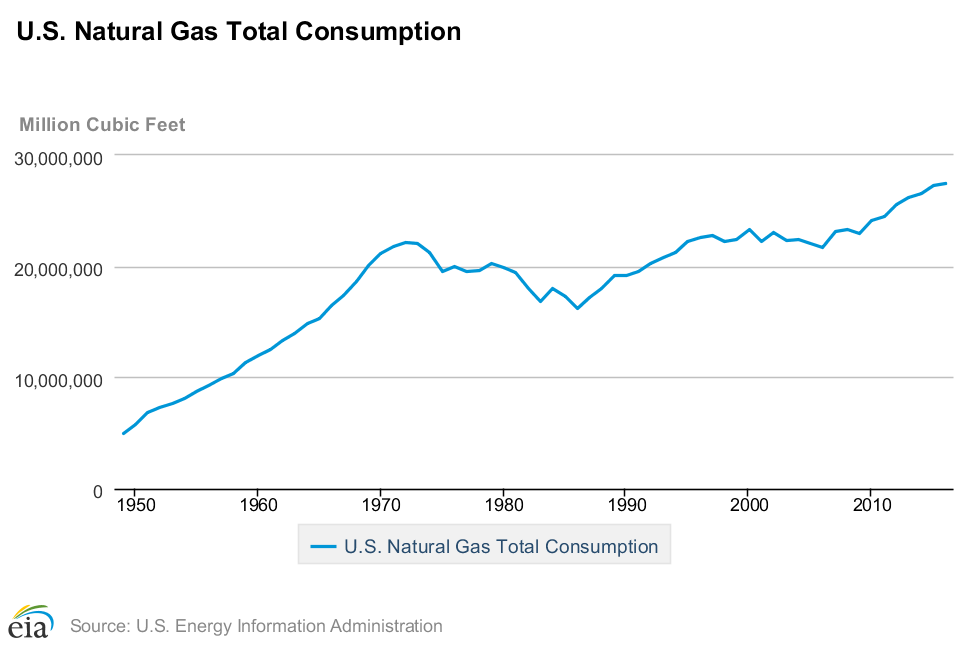 You see, as much as renewables are hyped in the media, and as fast as the industry is growing, it’s nothing compared to cheap, reliable natural gas.

It’s cleaner than coal and oil, and cheaper than both as well!

The Energy Information Administration estimates that by next year, U.S. inventories will be drawing down as demand all over the world continues to grow.

You may find bigger numbers in renewable projections, but that’s because they’ve got a lot more catching up to do.

Natural gas is already here, and it’s here to stay.

Not Short on Shale

We can thank the fast development of hydraulic fracturing for this natural gas revolution.

More than how much cleaner it burns, many industries wouldn’t have bothered adopting so much natural gas capacity were it not for abundant resources making the fuel so affordable.

And as time goes on, it becomes ever more glaringly apparent that U.S. shale is taking the lead.

Right now, the country is exporting from both angles: pipelines and tankers.

The vast majority of U.S. natural gas exports travel across the Gulf and into Mexico via pipelines. Exports to the country have quadrupled over the past few years, putting exporters in desperate need of new pipeline infrastructure just to keep up.

A decade ago, only 17 countries imported the fuel this way. Today, that number has grown to 39, and another seven are expected to be on board very soon.

All the while, import numbers have been skyrocketing across the board for countries already in the trade.

That last one puts a little more pressure on the global markets than your average delivery: Poland, like much of Europe, is looking for ways to divest expensive Russian natural gas, and it seems the U.S. is already a top pick to replace it.

The International Energy Agency has claimed the U.S. could be among the top three producers, surpassed only by Australia and Qatar, within the decade. (Sooner, if Qatar’s recent shunning brings the country’s export prices up too far.)

But it’s obvious that while the clean energy industry is developing across the globe, we’ll need a reliable, affordable alternative.

Natural gas is the obvious choice.

As the market takes off, both for dry gas and LNG, producers and exporters from the U.S. have the most to gain. After fighting tooth and nail to get those exports out, it’s finally time to turn on the shale taps full blast.