Rebirth of a Texas Oil Field

At one point or another, we've all heard about the major oil plays to unfold throughout U.S. history.

Even schoolchildren can rattle off a small list of the more famous ones: the Drake well in Titusville, Pennsylvania, or the Spindletop oil field in Beaumont, Texas.

Over a year ago, we talked about the East Texas oil field, one of the largest fields in the lower 48 states.

West Texas, however, holds a great deal of potential for future production — and exciting promise for investors.

This is one of the plays you don't hear about that often that perhaps you should...

In the early 1920s, most wildcatters had written off West Texas as being void of sizable oil fields.

Stories differ as to the first truly successful well in the Permian Basin, but the area was propelled to the oil industry's map after Texon Oil and Land Company drilled its Santa Rita #1 well in the field. 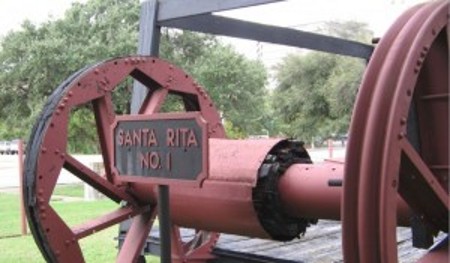 The well you see above produced oil for nearly seven decades until it was finally plugged and abandoned in 1990.

While companies have been pumping crude from the Permian Basin for nearly a century, the play has experienced a kind of rebirth over the last few years...

The basin is about 250 miles wide and 300 miles long, straddling 59 Texas counties.

Since the first wells were drilled in the 1920s, more than 28 billion barrels of oil have been produced.

Production from the Permian Basin accounts for over two-thirds of Texas' oil production, or approximately 17% of the country's entire output. Between 2005 and 2011, the number of drilling rigs jumped 175%.

As you can see, the number of new permits being issued has more than doubled in the last six years, leading to higher production:

But we can break things down even further to pinpoint exactly which areas are heating up: 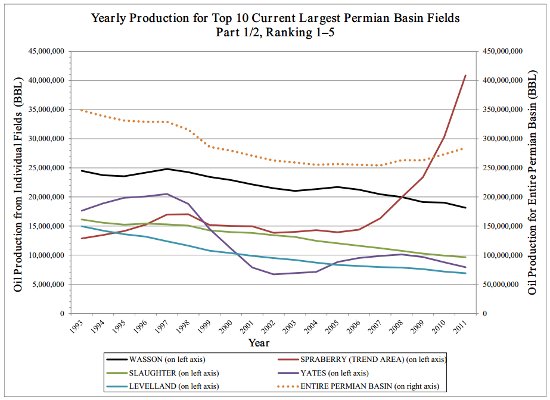 Production in the Spraberry Formation has exploded in recent years.

According to the Department of Energy, the Spraberry is the third largest trend in the U.S. in total proved reserves — and the seventh largest in production. We're talking about double the amount of oil than what's believed to be in the Bakken Formation.

Some reports estimate production in the Permian Basin in Texas and New Mexico could reach almost two million barrels per day by 2016.

So where does that lead us?

It's all too easy to take advantage of these Texas oil profits... that is, if you know where to look.

Two of the three largest operators here are not strangers to us.

Throughout 2011, Occidental Petroleum produced a total of 42.5 million barrels of oil in the Permian Basin — more than twice that of the next-highest producer.

The most active driller, however, is Apache Corp. Apache is currently running 34 rigs in the play.

If you're looking to narrow the field even further, Pioneer Southwest Energy Partners L.P. is pumping more than 7,000 boe/d from the Spraberry field in West Texas. It also offers an strong 8% annual yield.

And as you might expect, all three have delivered solid returns to investors over the long run: 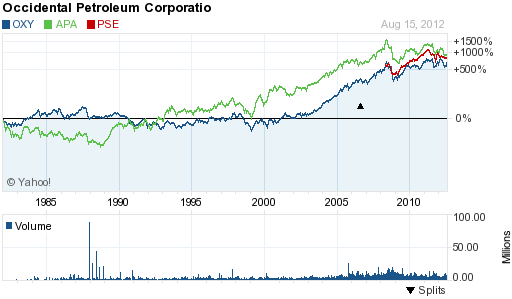 Keep in mind that investing in the drillers isn't the only option here.

There's a hidden profit gem in each and every single one of these older plays by way of the oil fields abandoned long ago...

You might already know that oil companies cannot recover 100% of the crude in fields; it's just too difficult and expensive to do so. Companies produce only the oil that makes economical sense for their bottom line, extracting merely two out of every ten barrels of the entire resource.

A common misconception in the oil industry is that the remaining eight barrels of oil are lost to us forever.

That's far from the case.

And by perfecting recovery techniques, drillers are able to revisit these wells.

This opens up a staggering amount of previously abandoned oil — we're talking about 430 billion barrels!

Approximately 15% of all Texas oil production is possible thanks to enhanced oil recovery (EOR). More importantly, these techniques are attracting serious attention to the Permian Basin, believed to have the world's largest market for CO2-EOR.

Just as hydraulic fracturing and horizontal techniques unlocked the huge tight oil formations across the United States, this company is giving oil producers the technological edge they need to boost well production.

My colleague Jeff Siegel breaks down all the details surrounding EOR and this unprecedented investment opportunity in his latest investment report.