Rare earths are back in the news.

As you may know, rare earths are a group of 17 elements crucial to production of energy and modern devices from iPhones and laptops to solar panels and oil refineries.

Nearly every modern comfort and gadget relies on this group of metals in one way or another.

Despite their name, rare earths aren't all that rare...

And that's precisely why you didn't hear much about them until last year.

While these metals aren't “rare” in the traditional sense of the word, they are concentrated in only a few locales around the globe. 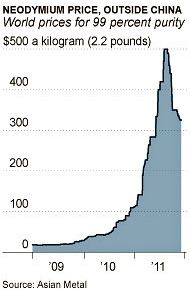 It just so happens that 95% of these metals are currently mined in China.

That's the moment the rest of the world began its infatuation with this group of metals.

And for good reason: Not only are they crucial for modern life, as I've mentioned, but they were also creating fortunes for companies with access to them outside of China.

And lanthanum wasn't the only one to climb like that...

Here's a chart of rare earth composite prices from Australia's Lynas Corp. (PK: LYSDY), one of the few companies producing rare earths outside of China: 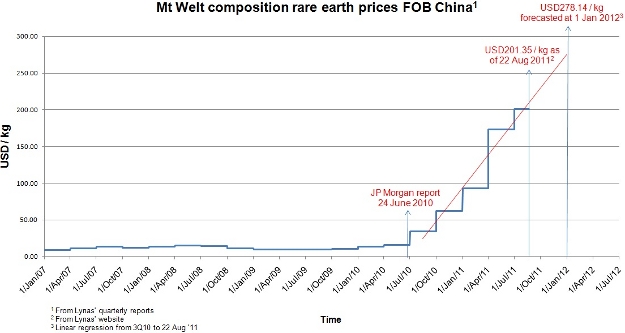 The +2,000% rise in rare earth prices quickly translated into gains for related companies. 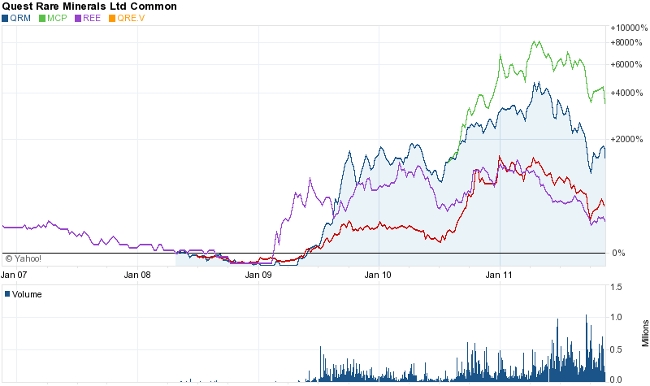 The increased prices put the pressure on companies to reduce their rare earth consumption or find substitutes. And in that wake, prices have started to recede.

After nearly three years of soaring prices for rare earth metals, with the cost of some rising nearly thirtyfold, the market is rapidly coming back down.

International prices for some light rare earths, like cerium and lanthanum, used in the polishing of flat-screen televisions and the refining of oil, respectively, have fallen as much as two-thirds since August and are still dropping. Prices have declined by roughly one-third since then for highly magnetic rare earths, like neodymium, needed for products like smartphones, computers and large wind turbines.

Big companies in the United States, Europe and Japan that use rare earths in their manufacturing have been moving operations to China, drawing down inventories, switching to alternative materials or even curtailing production to avoid paying the extremely high prices that prevailed outside China over the summer, executives said at an annual conference in Hong Kong on Wednesday.

Even with this fall's reprieve, rare earths could be in for another run in 2012.

You have to remember, we're dealing with China here.

And with demand and prices currently falling, many Chinese rare earth companies won't meet their export quotas this year. When that happens, the Chinese Commerce Ministry typically penalizes exporters by giving them smaller quotas the following year.

Not only that, but China's largest producer, Inner Mongolia Baotou Steel Rare-Earth, halted production last month in an attempt to stoke prices. Other companies followed suit.

Even worse (or better for investors), the Chinese Commerce Ministry also blocks companies from exporting rare earths at prices it deems too low, which inherently means we have a price floor. (Cerium, for example, is currently fetching between $45 and $60 per kilogram, but China won't export any for less than $70.)

These latest moves by the Chinese have prompted Congress to start researching the creation of a U.S. strategic rare earth reserve which would serve, at least initially, to foster demand growth.

According to a Financial Times post, several rare earth CEOs have said the creation of a rare earth reserve could potentially create “a rebirth of the U.S. rare earths industry.”

With less than a handful of rare earth mines in operation outside of China, continued price fixing games, and the growing use of handheld electronics, any company with access to supply is going to fetch a premium market price.

I happen to know such a company with 600,000 acres of land in Alberta filled with rare earths and other metals. It's part of the same geologic formations that have made the tar sands so successful.

Recently, I went up there and toured the property from a helicopter and on foot. I told you a bit about it last month.

On Monday, you'll be getting the video I made about my trip — complete with aerial footage of the property and the tar sands from my helicopter.

Before then, though, I want you to watch the latest Whiteboard Weekly video, which I made this week to tell you more about the current rare earth investment scenario.