It's halfway through October 2016. The leaves are changing despite the unseasonable warmth on the East Coast.

Over the weekend, my youngest child was stabbing imaginary scalawags in her new pirate costume, which came in the mail. The older girls fought back excitement with blasé attitudes, well practiced amongst their friend groups.

That must mean it is time for scary market predictions. 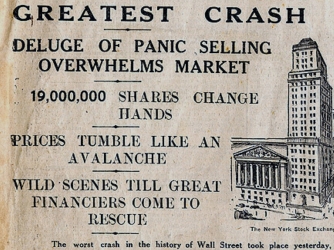 First, it should be stated in a deep voice with an organ playing ominous background notes that seven of the 22 market collapses this century have happened between October 15 and October 31.

Only the dead now remember the Panic of 1907, caused by Big Government going against trusts coupled with shrinking credit. There were bank runs and heavy selling on Wall Street. J.P. Morgan led a consortium that started buying. This was a precursor to the creation of the Federal Reserve in 1913.

The most famous crash, Black Tuesday, occurred on Tuesday, Thursday, and the following Monday in October of 1929. On that Tuesday, the volume was so high that the ticker tape was delayed by an hour, sewing anxiety and spurring on more panic selling. 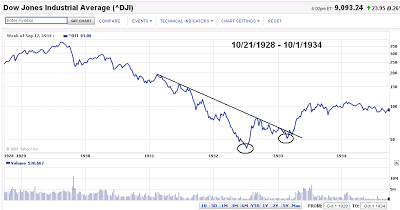 During the crash of 1987, automatic stop-loss orders and financial contagion crushed the market by 22% on a savage Monday in October. The market recovered in a few months, however.

The banking system could fail. The European and Chinese banking systems are full of black holes. Deutsche Bank has dropped from above $40 to $13 and has fired 10,000 bankers. There are concerns about a U.S. Justice Department probe into its mortgage securities activities, coupled with a cash flow problem. DB is just the tip of the iceberg in EU banking.

China's banking industry was recently downgraded to "Negative" by S&P due to rising bad loans. Private sector credit is expected to hit 150% by the end of the year.

Presidential election. It looks like Hillary will win the White House. This means higher taxes and more loopholes for Goldman Sachs. A surprise Trump win would cause a market sell-off, as it would overturn the status quo. A Clinton win could cause a "sell the news" scenario.

War. There are a number of nations dropping bombs on the small sandlot of Syria. There is saber rattling amongst Russia, Turkey, the U.S., and the U.K., as well as the 15 or so various players on the ground. A shooting war we don't want is a real possibility.

Silver will go up. The silver-to-gold ratio is in a downtrend from 80. The last time this happened, it dropped to 33 and the price of silver went to $51/oz.

Driverless cars will continue apace. Sensors are getting smaller, cheaper, and better. Tesla's Model 3 will start selling in late 2017 and will be half the price of its current lineup.