Profit From the Destruction of Evil

There is still an oil war going on in Iraq. Here are just a few of today's headlines:

ISIS, or the Islamic State of Iraq and Syria, is really the runt end of Saddam Hussein's Ba'athist army coupled with Tanzim Qaidat al-Jihad fi Bilad al-Rafidayn, known in America as Al-Qaeda.

Together, they form a barbarous group of Sunni killers that are as evil as any that walked the earth.

But as usual, it's all about black gold. And this fight goes back a long way.

In 1918, British troops invaded Mosul, Iraq in hopes of gaining control of the massive oil fields in the northern portion of the country.

What they found was world-class reserves that could rebuild the British Empire left shattered after WWI.

The Brits created the Iraq Petroleum Company, which gave them a virtual monopoly on all oil exploration and production in Iraq.

In 1972, the monopoly was broken as Iraq’s oil sector was nationalized, banishing outside countries from access and giving Iraq full control of its oil rights for the first time since the early 1900s.

And when Saddam Hussein rose to power in 1979, he was primed to take Iraq to the height of its oil glory.

Yet, as usual, Saddam failed. 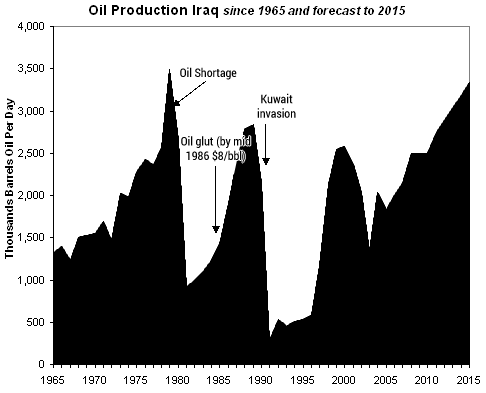 Iraq could produce 12 to 16 million barrels of oil a day. Instead, on a good day, it pumps 3.5 million bpd.

The reason for this is that Hussein purposely overlooked one of the largest oil fields in his OWN country — one that holds 13.7 billion barrels of oil: the Shaikan oil field.

You can see it located up there on the map between Mosul and Kirkuk.

And still, due to politics, war, or lack of funding... the massive oil resource in northern Iraq remains largely untouched.

But that's all about to change, and soon...

There’s one tiny company that has its hands on the lion’s share of the oil in this profit-rich region of Iraq.

And if that’s not enough, it also has the rights to three other prime chunks of oil-rich land in addition to the one I’ve been telling you about — and ALL of them have the very same oil-promising geography as the first.

This company is already pumping 40,000 barrels of oil out of the ground on a daily basis, and that number is expected to more than quadruple within 18 months.

All told, these guys are sitting on a whopping 13.7 billion barrels of oil — a true game changer for such a small company.

To put that in perspective, Pioneer Natural Resources (NYSE: PXD), a company with rights in the Eagle Ford, is sitting on 11 billion barrels of oil. Pioneer has a market capitalization of $23.87 billion.

For those who don't know, “market capitalization” is the value you get when you multiply the number of shares outstanding by the price per share. It gives you the total market value of a stock.

Another well-known company, Marathon Oil (NYSE: MRO), has claimed 4.3 billion barrels of oil and has a market capitalization of $21.86 billion.

The company I'm talking about has a market capitalization of less than $1 billion, and yet it is sitting on 3.18 times the amount of oil Marathon has.

That means this Kurdish oil company would have to go up by 2,208.34% just to equal one-third the valuation of Marathon Oil. That's absurd.

Look, I'm very excited about this new profit opportunity. However, due to the time lag involved in the publishing process, my free research report won't be available until November 18, 2014 — less than one week from today.

That said, if you would like to get ahead of the crowd, I've convinced my publisher to open a pre-order window that allows you to join my investment service, Crisis and Opportunity, today. Click here for access.

Don't wait — yesterday, the stock jumped 11%. As ISIS fades (and this is already starting to happen), this stock will come roaring back off its five-year lows.