Today I write from London, where the last of the combustion engine black cabs have been sold and the bicycle rickshaws are a peddle-electric hybrid driven by maniacs from Albania.

The waitress at the Portuguese tapas place gave us a long dissertation regarding guns in America. It seems she did a paper on the topic. Furthermore, she thinks we are all properly insane and has “given up on America, because you elected Trump, didn’t you.”

But she was cute and young and we enjoyed her accent, and not being one to interrupt digestion with negative controversy, we let her prattle on.

It seems London is under stress from terrorism and has a preoccupation with knives. There is a great fear that if you have a knife, someone will take it from you and stab you with it, and it's better that you don’t have one at all.

This is a misguided fear over guns in the U.S. as well. The thought that some ninja will take your weapon in a confrontation seems ridiculous at face value, but there it is, as if it is better to be weaponless in the face of terrorists.

She also mentioned that if women were in charge things would be much better in regards to war and crime and so on. I pointed out that the UK has had two female prime ministers, and I doubted she liked either one...

That ended the conversation like a needle across a record. That said, the food was excellent. If you are in the area, stop by PIX on Carnaby Street and give my regards to Chloe.

Back to the Market

Part of the reason I like gold is because everyone hates it.

The CFTC (Commodity Futures Trading Commission) reported money managers had never been more short gold, increasing their net short positions from 75,772 contracts to 82,722 contracts in the latest week, with 434,721 short contracts out.

The last time there was this much gold shorted was in the fall of 2015. Afterwards gold went on a 30% seven-month rally.

Now, everyone knows the Fed is going to hike rates in September and again in December.

Normally, this would boost the dollar and drive down gold prices. But in this case, it has been priced into the gold price, and what you’ll have is a relief rally.

This is a “buy the rumor, sell the news” scenario.

As the Economic Times reports:

When the rate hike happens, it closes out their trades by buying gold future and selling the US dollar. This prompts the rally in gold prices. This can be seen from when Fed chair Janet Yellen hiked rates in December 2015 and December 2016. In March 2017, the same thing happened.

The Federal Reserve is raising rates because it needs to be able to cut rates after it causes the next recession.

Here is the chart of the 10-year U.S. Treasury. This Friday, the Federal Reserve will raise interest rates. It currently yields 3.07%, and it is climbing. 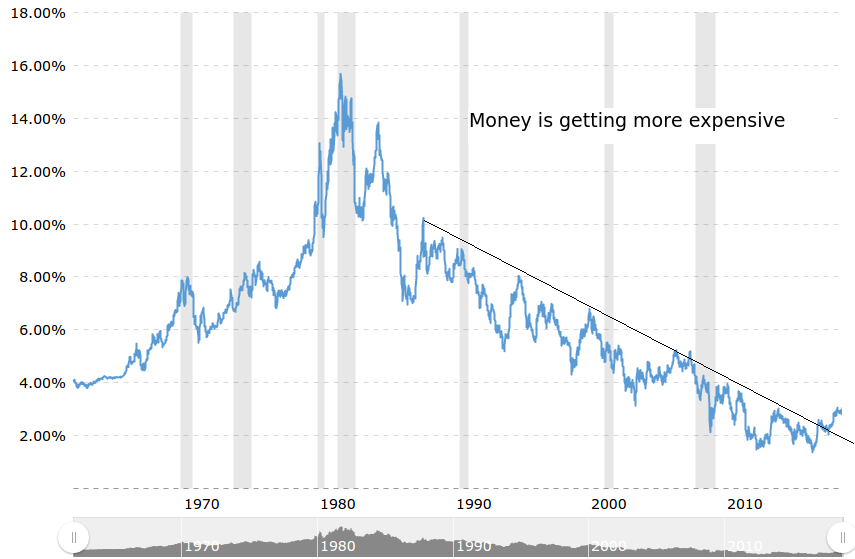 The price of money, which has fallen since 1980, is now going up.

Which would be fine if the world and this country weren't in so much debt. Those expensive schools you can’t afford for your children just got more so. That posh house will cost even more. Heck, Bank of America is predicting that real estate has peaked for this cycle. There is a headline that used car sales are up because people can’t afford new ones despite the seven-year loans. Those, too, will have higher interest payments.

But the biggest debt bomb is corporate debt. Companies have borrowed $2.5 trillion since 2008, driving corporate debt up 40%, where it is now equal to 45% of GDP. Have the companies used this money to invest in property and equipment — a new factory, perhaps, or R&D for a new drug?

No, they didn't. They used this money to buy back shares, thus pushing up the stock market and their own bonuses.

What happens when they have to start paying back this debt at a higher cost?