Platinum at a Historic Discount to Gold

The price of gold has moved considerably higher over the past few weeks. It has found good support over $1,250 an ounce. And while the yellow metal is still very well positioned to continue gaining, platinum could be set for even larger growth.

Simply put, platinum has never been so undervalued — ever.

At just over $950 an ounce, platinum is trading at a near all-time discount to gold.

Meanwhile, the market is faced with serious platinum supply deficits that almost promise to send prices much higher from here. And for the few investors who recognize the opportunity and take action, large gains seem quite likely.

The World Platinum Investment Council reports 2017 will be the sixth consecutive year that global platinum demand will outstrip supply! And it forecasts a continually widening supply deficit through 2020.

These supply deficits are simply the result of platinum's scarcity. It's a very rare metal. Platinum is about 20x rarer than gold. Only about 250 metric tons of platinum is produced annually worldwide. Compare that to the 2,800 tonnes of gold mined globally every year.

To add to the supply problem, the majority of the world's platinum resources are highly concentrated in geopolitically unstable regions. Approximately 80% of all platinum production is based in just two countries: South Africa and Russia.

And, unlike gold, platinum is an important industrial metal. More than 60% of the world's platinum demand is industrial. Most of the industrial demand comes from the automotive sector. Platinum is a key material for the production of catalytic converters, which have been a standard and regulated part of vehicles since the 1970s.

As a result of all this, platinum prices have spent most of the past 45 years trading at a premium to gold. In fact, platinum used to be called the “rich man's gold.” But today, as I mentioned, platinum trades at a near historic discount to gold.

The price relationship between the two metals is best illustrated in the gold/platinum ratio. This is simply the price of gold divided by the price of platinum, and it describes their relative price strength. If the ratio is high, gold is more expensive than platinum. If it's low, platinum is more expensive.

The current gold/platinum ratio is near all-time highs at 1.3. This shows platinum is cheaper than it's been in decades relative to gold. Have a look... 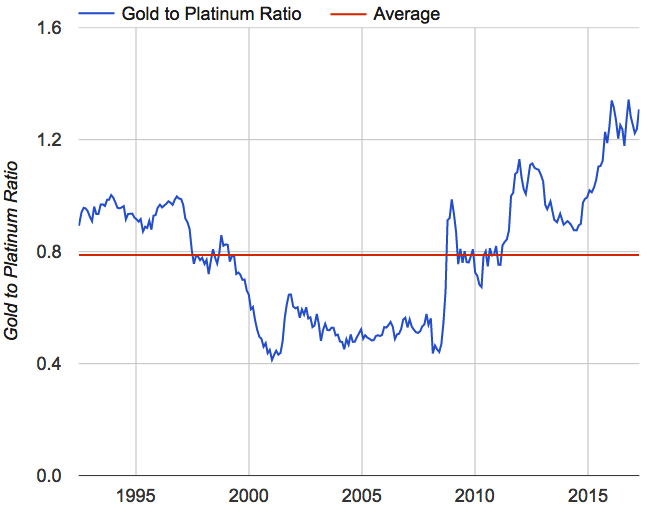 For investors, however, getting good exposure to platinum can be a bit troublesome in both options and expenses.

The most direct way to get investment exposure to platinum is by owning the physical bullion, such as the American Platinum Eagle. But the premiums for physical platinum bullion are currently very high.

A better way to invest in platinum is through ETFS Physical Platinum Shares (NYSEArca: PPLT). However, this ETF is not designed for long-term ownership. PPLT is a trading tool. Right now, I think PPLT is a great buy for a small, short-term gain. But for more leverage over the long term, investors need to look to shares of the companies that produce the metal.

With a widening global supply deficit and historic price divergence between it and gold, platinum currently offers a unique investment opportunity that will reward the few investors who recognize it.

At the end of the day, large producers such as Anglo and Impala are the most appropriate investments for most investors looking for long-term exposure to platinum.