Someone recently reminded me that winter is coming... and it isn't the person you think.

For over two centuries, people have turned to The Old Farmer's Almanac for their weather forecast. This year, the almanac gave us an ominous warning, calling for a super-cold winter in the eastern United States.

Considering how long this publication has been around, its track record is quite impressive — the predictions hit the nail on the head nearly 80% of the time.

But I know what you're thinking about its 2015 forecast — not again?

Not only was last year bitterly cold, but it also seems everyone suddenly had to learn what a polar vortex was. Meteorologists were ecstatic.

This time around, temperatures are expected to be much colder than normal, with above-average snowfall hammering the Atlantic Corridor.

Aside from necessitating stocking up on shovels and salt, this frigid portent also signals another — more rewarding — opportunity.

This chart from last year's last colder-than-expected winter might ring a few bells: 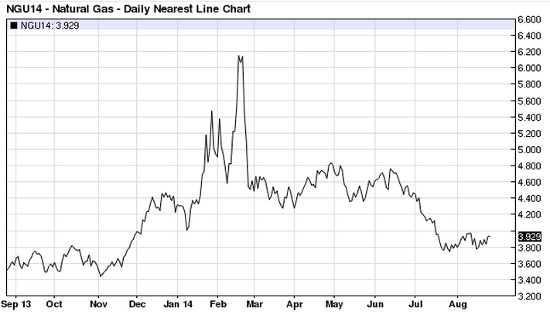 Within a span of just four months, natural gas prices surged more than 80%!

Winter may be coming, but will we be ready?

The short answer is: no.

Along with record-low temperatures, we also saw record withdrawals from the United States' working gas storage.

In order to prepare for next winter, we're going to have to inject an incredible amount of natural gas into storage by October (which is typically the end of the injection season).

So far, that's precisely what we're doing, and the Energy Information Administration's (EIA) latest Short-Term Energy Outlook even confirmed that the U.S. has been on a strong pace so far this season.

Unfortunately, there's one tiny catch: It's not enough. 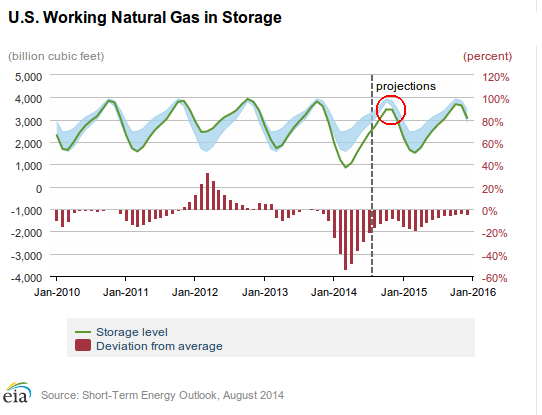 Even at this rate, we'll still be below the five-year storage level average. The EIA is projecting storage levels will reach 3.463 trillion cubic feet by the end of the season — 353 billion cubic meters lower than they were in 2013.

What few realize, however, is that another brutal winter could send natural gas prices screaming higher — and there are several reasons why.

I'll let the numbers do the talking.

Contrary to popular belief, natural gas demand in the United States has steadily increased since 2005. Also keep in mind that this is in spite of the recession.

Again, there's quite a hitch to this natural gas bull...

Although many of the statistics in the shale boom seem more like hyperbole, there's a very sobering reality to our natural gas production.

Just two shale plays — the Marcellus and Utica in the Appalachian Basin — account for 24% of U.S. domestic gas production. The two combined supply this country with 17.2 billion cubic feet of natural gas every day. 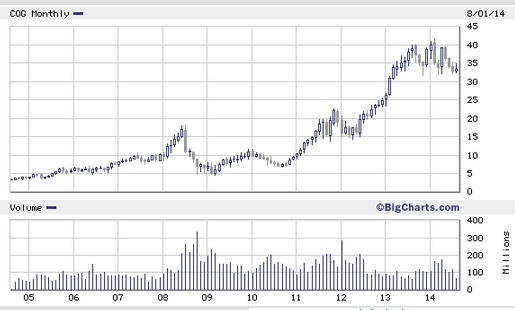 If we add the daily gas output in the Haynesville formation to the Marcellus and Utica, then we're talking about 33% of the United States' gas production.

What about all shale plays, you ask?

It isn't a coincidence, nor is it luck that has driven our shale fortunes.

It all comes down to mastering THIS technology.