All too often, people oversimplify things.

Whether it's comparing our federal budget to a single household budget, or absolutely refusing to take a closer look at the various political one-liners we see every day in news cycles, we're constantly exposed to the facts being boiled down to a simple, black-and-white concept that can easily be forced down a feeding tube.

We see a perfect example of this in the energy arena, and nothing will be more destructive than oversimplifying (and, as a result, misconstruing) the concept of Peak Oil.

The rebuttals are screamed by both oil exec and environmentalists alike: The second Peak Oil is brought up, it is dismissed as "a foolish theory" — and figures and media headlines are thrown into the mix to "prove" that we still have plenty of barrels of crude oil left to tap on this planet.

That's a costly belief to defend. And it's one that shows us just how little the vast majority of people know when it comes to the world's oil situation...

Contrary to popular belief, Peak Oil is neither a theory, nor does it portend the world is running out of oil.

Let's be clear, nobody should be arguing that...

Because we won't come close to producing every last drop of oil on earth. Long after the clowns finish performing at my funeral, there will still be barrels of crude beneath the surface.

(Now, whether or not we'll be able to economically produce that oil is arguable.)

We can trace the entire Peak Oil debate back to a single speech given 56 years ago at the Plaza Hotel in San Antonio by a Shell geologist named Marion King Hubbert...

It was an ominous picture of things to come, predicting U.S. oil production would peak by the early 1970s. (See the original presentation in its entirety here.)

As you'd expect, Hubbert was laughed out of the room. But his prediction turned out to be eerily accurate when U.S. oil production peaked in November of 1970 at slightly more than 10 million barrels per day.

And despite the surge in tight oil production since 2008, we're still about one-third below our highest production levels.

Here we are, years later, and people are still arguing about Peak Oil. The really disturbing part in all of this is how a doe-eyed public remains content with the oversimplification of things: "Oh, oil production peaked in 1970? We'll just drill more, or go out and find more fields!"

Bottom Line: If we take the best production estimates for shale oil and assume that our conventional oil production won't continue its irreversible decline, we still won't ever break past 10 million barrels of crude oil ever again.

Sure, we'll try. And we'll see a certain degree of success with the boost in unconventional production.

But Hubbert was thorough in his theory, and he went beyond the United States in his explanation...

Today his chart from the original 1956 paper still points to a gruesome future for global oil production: 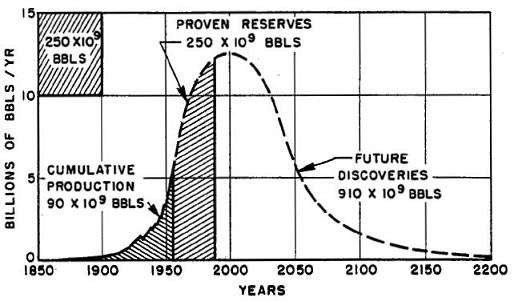 Right away, one would argue that we've surpassed Hubbert's deadline for Peak Oil.

And that may be so — but again, things aren't as cut and dry as you might think...

We've talked time and again about the troubling state some of the world's largest oil fields are in today.

The truth is there's a specific reason we won't see alarms going off or any significant concern or outcry from the public on this issue: The details of the world's oil production are constantly burnished to avoid scrutiny.

Just look at the subtle shift in how our oil supply is reported...

It's almost too easy to confuse people and act like nothing is wrong!

According to the Energy Information Administration, global oil production in 2011 was about 87 million barrels per day. That number represents a 36% increase since 1980.

But the devil is in the details...

Today crude oil is losing its share of global production: It now represents less than 85% of the production mix.

Meanwhile, NGPLs and those same other liquids make up 10% and 2.4% of the world's "oil" supply. And it's easy to add them to the mix.

After all, it's the only way to keep those production and consumption numbers close. (And that doesn't even take into consideration the fact that the quality of our oil today is far from what it was decades ago.)

On the day Hubbert took to the podium in San Antonio, oil was cheap for us to pump and easy to get.

Eleven years later, companies in Alberta's oil sands deposits were finally able to economically produce the vast bituminous resources there. It's become an integral source for U.S. imports ever since.

I want to close by saying it's not all doom and gloom for energy investors...

If nothing else, this fundamental shift taking place in global supply boosts the value of companies that are actually pumping out the light, sweet crude that refiners are desperate to get their hands on.