Gold prices continue to remain strong. And they may even head a bit higher in the near term.

But we could see a bit of consolidation and horizontal trading in the gold market over the next few weeks, which could present some very interesting opportunities for investors in the junior mining market.

The price of gold soared following the U.S. Federal Reserve's interest rate hike back in December 2015. But the fast run-up was followed by a period of consolidation and generally horizontal prices that last a few weeks. 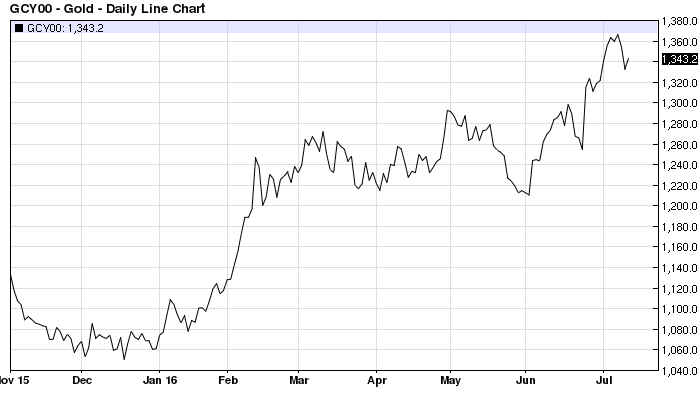 The gold and mining markets were again launched higher beginning in June. And a series of events — beginning with disappointing U.S. employment numbers on June 3rd and continuing with a dovish FOMC meeting, Brexit, the tragedy in Dallas, and the Italian bank scare — has now given gold prices a solid foundation over $1,300 an ounce.

Up next, the Fed's July FOMC meeting on the 26th and 27th will be in focus. Traders are currently putting a 0% probability of any interest rate movement at the July meeting. And there could be a bit of continued strength in gold prices in the days ahead of that meeting — which I think could move the yellow metal as high as $1,380 an ounce.

But following the Fed's FOMC meeting (and excluding any unforeseen major world events), I expect to see another brief period of consolidation and generally horizontal prices similar to the one beginning in March.

I expect gold prices will meet strong resistance at $1,380/oz due to profit-taking. Although it's more difficult to predict gold's downside.

Currently gold is sitting at about $1,325 an ounce. So nearing $1,300/oz, gold will find pretty good support in the near term. Anywhere under $1,300, and I believe the yellow metal will find great support. But I don't think we'll see gold below $1,275/oz in the foreseeable future.

I think we can generally expect to see gold prices range in the $1,325/oz to $1,350/oz area following the Fed's FOMC meeting later this month.

Looking ahead a bit further, though, there are still a number of things that could easily be a catalyst to push gold prices to $1,500/oz by the end of the year.

An interest rate cut from the Fed, another bank or currency disaster in a major European country, the change in Sharia law that will allow 1.6 billion Muslims around the world to directly invest in gold bullion, or any number of unforeseen events... any one of these could send gold prices much higher than they are today.

So I think we should use any consolidation in the gold market to add positions in our portfolios. Specifically, there are opportunities presenting themselves to investors in the junior gold and mining markets right now that most people are overlooking.

Back in May, I wrote to you about a significant uptick in the amount of private placements in junior mineral companies that occurred during the first quarter of the year.

Now, all of these private placement units were issued with the standard hold period of four months.

And that means all those private placement units that were issued during the first quarter of the year are now (or will soon become) freely traded shares. This will likely lead to (and most likely already has) significant profit-taking from certain companies.

What's more, many of the private placement deals that were offered during the first quarter had a significant difference from those offered in past markets.

The vast majority of junior mining private placement units used to come with one-half of an exercisable warrant. That means if you purchased 50,000 units of the private placement, you also had the right to exercise an additional 25,000 shares of stock later on at a fixed price.

However, many of the recent private placements offered during the first quarter came with a full warrant with each unit. In other words, if you purchased 50,000 units of the private placement, you also had the right to exercise an additional 50,000 shares later on at a fixed price.

And that means some junior mining companies are now (or will soon become) diluted with new shares.

In a few weeks, I will be relaunching a premium service called Secret Stock Files that will be specifically focused on investing in gold and junior mining equities.

Secret Stock Files was a natural resource- and mining-focused investment service than I operated until 2011. In the summer of that year, the Secret Stock Files portfolio (as well as my own portfolio) was sitting on dozens of triple-digit and several quadruple-digit gains. These gains were so spectacular that I decided it was time to secure all profits from our six-year run of gains — and I sold everything.

It was perfect timing.

The price of gold topped $1,900 an ounce that summer — but only briefly, before four straight years of price declines.

After watching the gold and mining market continue to suffer year after year, I reentered the gold market personally back in October 2015 and began writing to and urging Energy and Capital subscribers like yourself to start buying gold and precious metals again.

Those gains aren't bad. Especially because they're short-term. They could be better. Honestly, these gains are just okay relative to those we've seen in the past from junior mining stocks. And that's simply why I'm bringing Secret Stock Files back to life... There's no doubt at this point that the gold bull market is real, so taking a bit more risk is well justified.

Now, as I mentioned, the Secret Stock Files relaunch won't be happening for a few weeks. But if you want to start right now learning about junior gold and mining stocks, a terrific resource is Gerardo Del Real's Resource Stock Digest Premium.

Del Real is, like myself, one of the few analysts around who's specifically focused on junior mining stocks. And there's no doubt that he's got great ideas and is a gifted stock picker. He just launched Resource Stock Digest Premium and recently wrote about a half-dozen winners, including a 118% gain, in the first few weeks of the service alone. He's killing it.