OPEC's House of Cards on the Brink of Collapse

I know the spotlight has been focused on the constant posturing among the world’s largest oil producers like Saudi Arabia, Iran, and Russia. It’s only natural the talking heads in the media stick with the heavyweights just prior to the informal meeting in Algeria.

But I want you to ignore all of that drama today.

“The declining oil industry is perhaps the most urgent chapter of Venezuela’s economic crisis,” wrote the New York Times this week.

The repercussions of Venezuela’s collapse would send a ripple of fear through OPEC. I wouldn’t even be surprised if the oil cartel gives Venezuela the boot going forward.

Should you be worried?

When the Saudis initiated their oil war two years ago, they said it was because the U.S. shale boom threatened to upend their dominance in global oil production.

Surely you remember the fiery rhetoric by Saudi officials over protecting their national security by keeping U.S. output in check. After all, the more oil the U.S. can extract from its fields, the less it would have to rely on foreign imports.

The Saudis were determined to keep their market share intact, and they clearly don’t care who they have to crush to do so.

Unfortunately, that meant stabbing fellow OPEC brother Venezuela right in the back.

So why would these two OPEC members be at odds with each other?

The answer lies in the Gulf Coast.

More specifically, it’s the refineries along the Gulf Coast that are geared for heavy crude: 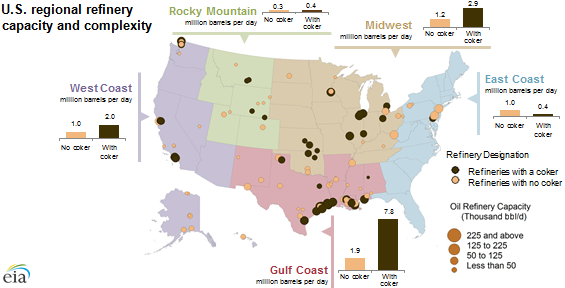 You see, the new crude the Saudis are pumping out of the ground is of a much poorer quality.

Some of you might remember when Libyan exports dropped by more than a million barrels per day in 2011 due to its civil war. When the Saudis ramped up production to offset the loss, we learned that the European refineries, which were used to light crude from Libya, couldn’t take the Saudis’ heavy oil.

So much for saving the day.

The Chart All Venezuelans Fear Most

You can see why those Gulf Coast refineries might be important to the Saudis.

Over the last nine years, more and more Saudi crude shipped to the U.S. was being directed toward the Gulf Coast. In fact, fully two-thirds of Saudi crude exported here now ends up in those coveted heavy oil refineries.

During the same period, Venezuela’s own exports to the U.S. (almost 97% of its total) had declined as the Saudis tore a chunk of its market share.

Losing ground to the Saudis in the Gulf Coast is only the beginning of Venezuela’s economic crisis. And the country has been one of the hardest-hit victims in the Saudi war against the U.S. shale boom

Let me show you the chart Venezuelans fear most: 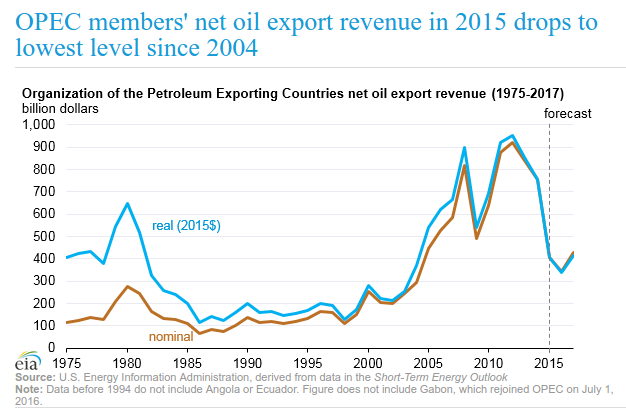 Even though the Saudis’ spare capacity is of poor quality, keep in mind that virtually ALL of Venezuela’s oil reserves are of the poorest quality. More importantly, we’re talking about some of the most expensive-to-extract crude on the planet.

You want to know how things are? Venezuela is actually importing U.S. crude oil right now!

With its own industry crumbling (Venezuela’s oil production has fallen to 2.4 million barrels per day), the entire country is on the brink of collapse.

Now pile on the food shortages, the rolling blackouts, or even the fact that nearly 66% of its oil production directly goes to paying off China and anyone else dumb enough to loan the country money.

With living conditions being so deplorable, you have to ask how much its populace will take before it snaps.

Venezuela’s president was literally run out of town, chased by a furious mob of protesters, in a city that was a major supporter throughout his election — imagine President Obama’s motorcade being chased out of Chicago!

There are only two miracles that can happen at this point: Venezuela’s oil boosts output, or crude prices surge higher overnight.