Why Saudi Arabia's Bluff is a Huge Buying Opportunity

All eyes were on Doha last weekend, and the drama didn't disappoint.

Essentially, the world's largest oil-producing countries were unable to negotiate an output freeze (I guess we're way beyond hope for a production cut).

Okay, I'll admit that the failure to reach an agreement by representatives attending the Doha meeting wasn't a surprise. We weren't shell-shocked by the outcome. Truth be told, we weren't even mildly astonished.

Why? It was because of the fiery rhetoric firing back and forth across the mainstream media by officials from both Saudi Arabia and Iran — each stuck to their guns, with neither giving an inch.

Look, I've said that this OPEC showdown is causing the oil cartel to implode.

More important, however, is that it's become very clear to everyone who Saudi Arabia's real enemy is right now.

Nobody likes to be stabbed in the back.

So when Iran refused to send even a single representative to the meeting in Qatar this past weekend, the world got a firsthand look at how dysfunctional the OPEC family is. Remember, this isn't the first time Iran has spurned its OPEC brethren for more profits.

Yet this internal strife within OPEC goes much, much deeper than the two butting heads over daily output.

It was inevitable that Iran was going to increase production after sanctions on its exports were lifted. And if the goal for Iran is to bring output back to its pre-sanction level of 3.6 million barrels per day, there was bound to be a little pushback by Saudi Arabia, who is pumping nearly 11 million barrels per day right now.

No, it's not about how much oil Iran is pumping out of the ground every day — the Saudis will be extracting oil whether crude prices are $25 or $125 per barrel.

The House of Saud is more concerned with where Iran will be selling its crude.

First, it's important to understand where the Saudis are shipping their oil. Three years ago, the Saudis' biggest customers included Asia, Europe, and the United States: 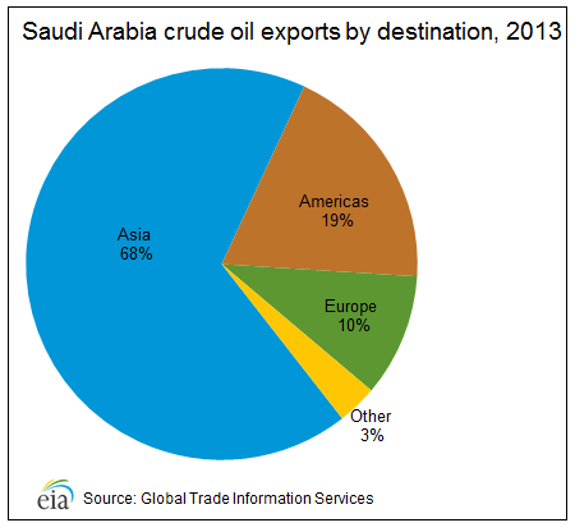 Now consider the fact that Saudi Arabia itself is quickly becoming an addict to its own crude drug (ultimately leading to less oil available to export), and you can understand why young Saudi princes lie awake all night with nightmares of lost market share.

With Iran expecting to add up to 800,000 barrels per day to global supply this year, it's easy to understand why the Saudi Kingdom is getting defensive. Iran's Oil Minister even expects the country to hit its pre-sanction production levels within the next two or three months!

Unfortunately, the country is encroaching on Saudi buyers. In February, Iran boosted its crude exports to Asian countries by 25%. More recently, Iran inked a new deal to ship 700,000 barrels per day to Europe.

For the record, Iran's oil exports have grown rapidly — more than 600,000 barrels per day — since the ball dropped in Times Square a few months ago.

So between Iran, Russia, and potentially the United States flooding Asia with crude oil, don't expect the Saudis to cooperate anytime soon.

Doubling Down from Doha

Take Doha for what it is: an incredible buying opportunity.

If you weren't bullish on the long-term value in oil a few months ago, you should be by now. And even though the market's initial reaction to the failure in Doha caused oil prices to drop sharply, it took less than a day of trading for crude to recover.

Personally, I'm not expecting a sudden price spike. The supply/demand imbalance, along with a host of other factors, is keeping things in a precarious state.

That doesn't, however, discount our opportunity while oil finds support around $40 a barrel.

We're nearing the moment of truth for oil, and I'm ready to double down after Doha.